Saimantick exclaimed, “It’s the 18th that I dread. Not anything else. ISC results are going to be out.” I laughed at it explaining to him how scared I was during this phase, back in 2007. He told me he might get a seventy something percentage. He had a grim face with perhaps the palest eyes, staring at me. Not many months ago did I ask him to study hard and study economics in either Presidency or in Delhi University. Now I know that he is not interested in Economics, but in photography/designing.

It is wonderful to see how most of our parents and the society around, have created a make belief world for us, where we as children are made to believe, the world might just end if we score badly. For a few, not getting “science” in class 11 is family’s shame. For a few, not cracking IIT JEE is worse than ending their lives. I was one of them who craved for IIT and failed to qualify. My life did not stop and by the grace of God, I earn enough to make ends meet.

There were times when I scolded Avishek Rakshit (CBS, Batch 2014) very heartlessly asking him to study and live up to the 95% he got in his class 10 boards. At times, I even asked Rimbik (SPMS, Batch 2013) to balance his passion with studies, and pursue engineering like his parents wished. Now why did I ask them to? May be I thought they would not get admission to good colleges or perhaps in the future, not earn much. That is what most of us in middle class society think of. As a friend who is elder to them, there was a sense of apprehension. I can only imagine how tense the parents would be. But somewhere beyond the apprehension is a belief, a belief in their aspirations.

You know what? Rakshit who scored lower than 80% in his ISC, took the admission test and qualified for economics honours for Ramkrishna Mission Residential college which is now ranked third nationally in the NAAC list. Rimbik, who was adamant to follow his passion is now is student of St. Xaviers, Kolkata. Today, I see them happy and smiling. That is satisfying enough.

So how important is one’s class 12 result?

We do not tattoo our class 12 marks on our foreheads. Do we? The first thing a stranger notices in a person is one’s behaviour. The stranger could be your future manager, future client or future wife as well.

That is perhaps why during the engineering placements, different multinational companies want a mere 60% in class 10 and class 12 board results. The student has to pass a separate aptitude examination and then clear the interview.

Not only companies, many colleges like St Xaviers, Symbiosis, BIT and their likes, have their different entrance examinations.

If tomorrow I lead a team, what are the qualities would I be looking for while searching a team mate? Good behavioural and presentation skills, common sense, sincerity, ability to work in a team, sense of empathy towards other members and slightly more importantly, his interest in the work.

According to me, what does class 12 result signify?

To discuss whether we should judge a dolphin by its tree climbing skills is beyond the scope of this blog post.  But yes, class 12 scores signify a very simple thing – It quantifies the level of sincerity and responsibility of a student, to achieve what he is supposed to, even if he does not like it. They acquire skills easily, which contributes to the organisation that recruit them. I am not sure what percentage of top engineering graduates become entrepreneurs or are happy with their job profiles.

In this current Indian education system, what it fails to gauge is the implementation skills of the student, neither does it say anything about innovation and team management skills. I’ve personally known students who got over 85% in their ISC (year 2007) but does not know how to switch a computer on. I’ve known students who got over 90% in their class 12 boards who were arrogant and looked down upon people. I’ve also personally known a MBA student from one of the leading colleges in the region who prioritises going on dates over very important team meetings.

When I say all these, I do not mean the good scorers are bad people. 3 of the very few people who are extremely close to me – Surya, Arjyak got over 94% in their ISC. Souranil got over 95% in his ICSE results.

To generalise and to form an impression of a person based on the marks he gets in his class 12 examinations should be stopped. I appeal to my readers to think about it once. Today I speak as a failed marks scorer, but a happy elder brother.

This is a new beginning whatever you score!

If you are pursuing a creative field, UI/UX, Computer science – every day is a new beginning for us. Each single day there is something to learn, something to innovate and some problem to solve. Whichever college you go to, if you do not continually learn and keep innovating, even the best of scores or the bests of colleges could help you. The internet is the biggest resource.

I do not have much idea about B.Com/BBA. But I believe a student should aim colleges which have good professors, because they are the ones who would share their experiences with you for you to learn and would refer you for intern ships. For CA examinations, you can appear for CPT even if you get a 60% in class 12 examinations.

The elders should NOT force young minds.

A student cracked Computer Science Engineering in NIT Dgp (not verified), but his parents insisted he takes up Computer Science honours in Scottish Church College, Kolkata. A kid who had always dreamt of making and programming robots studied Electronics and Communication in one of the leading private college in Kolkata. He was made to appear for AIEEE, again the next year. Now he studies Biotechnology in NIT Durgapur. Another kid who could have got into some college in Kolkata, purposefully chose a college in Durgapur, a college he had no clue about till the day of counselling. He did not simply want to face his father back at home.

Well, ahem. After you join an MNC, if you see differences in the world you thought that would be and the world that is, trust me, you’d think twice. Most of our “career choices”, specially of the science students, that are supposedly taken by students are imposed by their parents. A huge number of engineers pursue MBA slightly after their graduation. While a few others change their profession to something their heart wishes.

You never know what you’ll end up doing to earn your bread. Now you can only contemplate. 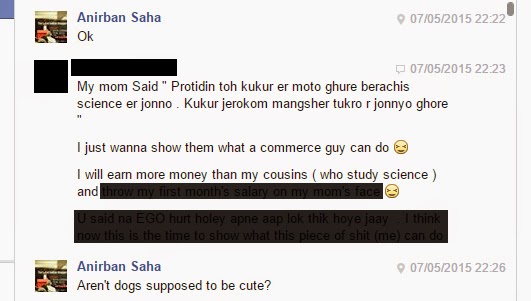 This is sent to me by a student who could not get Science in class 11.

So how does the others feel about class 12 results?

I could not apply to JU science because of those marks, which probably would be bad news for people intending to go in there.On the other hand none of that had any effect on my future whatsoever because my stream is completely different and mostly portfolio based.

… Honestly, if I could go back in time, would I advise my younger self to study (a little bit) more to maintain decent marks/CGPA? Yes. Absolutely. Because frankly speaking – at that point of time I did not know what I wanted to be in life, and having good grades as backup would have boosted my confidence and kept my arrogance (the arrogance of despising people “in the system”) in check back then, if nothing else.

We put a lot of emphasis on the academic record of a person, … and we often come across people with mediocre grades, coming from mediocre colleges doing great professionally.Still… To be on the safer side..it is always better to have a good academic record. It helps!

(It does not matter) unless you want to study more!

The marks are important because they determine the direction your life will take- not just academically but also the college you will go to, the friends you will meet, the experiences you will have. Otherwise it’s just printed paper , incapable of reflecting the person you are smile emoticon It never reveals you!

It depends upon the time frame you are considering / thinking of. For me till the age of 25-26 it mattered. But now it doesn’t.

If the system is important to you and you want to stay within it – then your kids are in for a hard time. but the system never was, to me. i encouraged my kids to do their best, did not wring out their backsides at tuitions… no, I don’t think top marks assure you a great life ahead. and isn’t our education system here all bull anyway… and its gotten even worse when I last checked.

It’s all about market competitiveness. India, so to say, has a great talent pool. To apply method of elimination, you need to have benchmarks. Usually high scores at exams helps an organisation to set the bar high to evaluate candidates and filter them through. in this respect, good scores yield better outcome. Other than this, from work & performance perspective, it hardly makes impact.

For the next step and getting admission in college. Nothing beyond it. .. I do not care (about the college name). But yes good college attracts first.

But the truth is people who are mediocre, obedient and can take a lot of pressure are the ones who prove to be valuable for the companies. Academically brilliant often suffer from career frustration after the initial honeymoon is over.

You can find more responses in this link and you should join the conversation as well here.