“Sharodotshob” in Bengali would translate to the festival during the Autumn, which also very intuitively refers to the Durga Puja (the religious festival worshipping Goddess Durga). Back in the city where I’ve lived almost my entire life so far, this is the time for the biggest and most exuberant celebrations. It’s more than a religious festival might ever become. There’s worshipping the Goddess, new clothes, a lot of food, friends and family gathering and “pandal-hopping”. Pandals are temporary temples built specifically during this time so that people (around 14 million of them) can be accommodated. But what’s “hopping” in it? Like most things Bengalis do, we made this an occasion to show off our artistic skills and have made this an opportunity to raise awareness about social issues etc. So a person hops from one pandal to the other. The Sharodotshob or Durga Puja is often referred to as the biggest open-air art festival in the world. But this is not what I want to discuss in this blog post*.

I am away from Calcutta for more than one year now. Last year, I felt autumn in Portland, USA where I was pretty amused by the red leaves. But the program I was in, did not really allow me the liberty of being poetic about it. I properly felt it when I started breathing properly in Magdeburg. But I am not a poet, so this time even when there is the liberty, I am not.

Like I mentioned in a couple of blog posts earlier, in Magdeburg or perhaps anywhere else, you will see and feel the seasons change. You can not escape or miss noticing the change. During the Spring, the entire city becomes an extended garden. The summers are hotter than I had ever expected them to be. The Germans agree with me and blame global warming. Slowly with the passage of time, the green of the leaves change to the lighter shades of yellow. They dry and wither but somehow remain on the branches till the wind hits them. They fall on the ground and that’s something one must not miss feeling. This feeling is festive enough.

So when I see Germans gearing up for the Halloween or the Christmas during late September, somewhere deep in my heart I know the Dhaak (drums) have started playing back in Calcutta. Be it Christmas or Durga Puja, it is a celebration time. Each time I walk from my home to the university campus, it feels festive. Each time I walk down the riverside or stop when a man plays the mouth organ or perhaps every time an old German lady smiles and talks to me when I offer her a seat in the tram or pass by them, it is festive. It’s just a happy festive time, be it Calcutta or Magdeburg. Be it the drum rolls in Durga Puja or the change of colors and the embracing of the winters.

I wish I could photograph every bit of it and show it to you. But there are some things which I can – show you a couple of photographs of the autumn here in the campus and around. 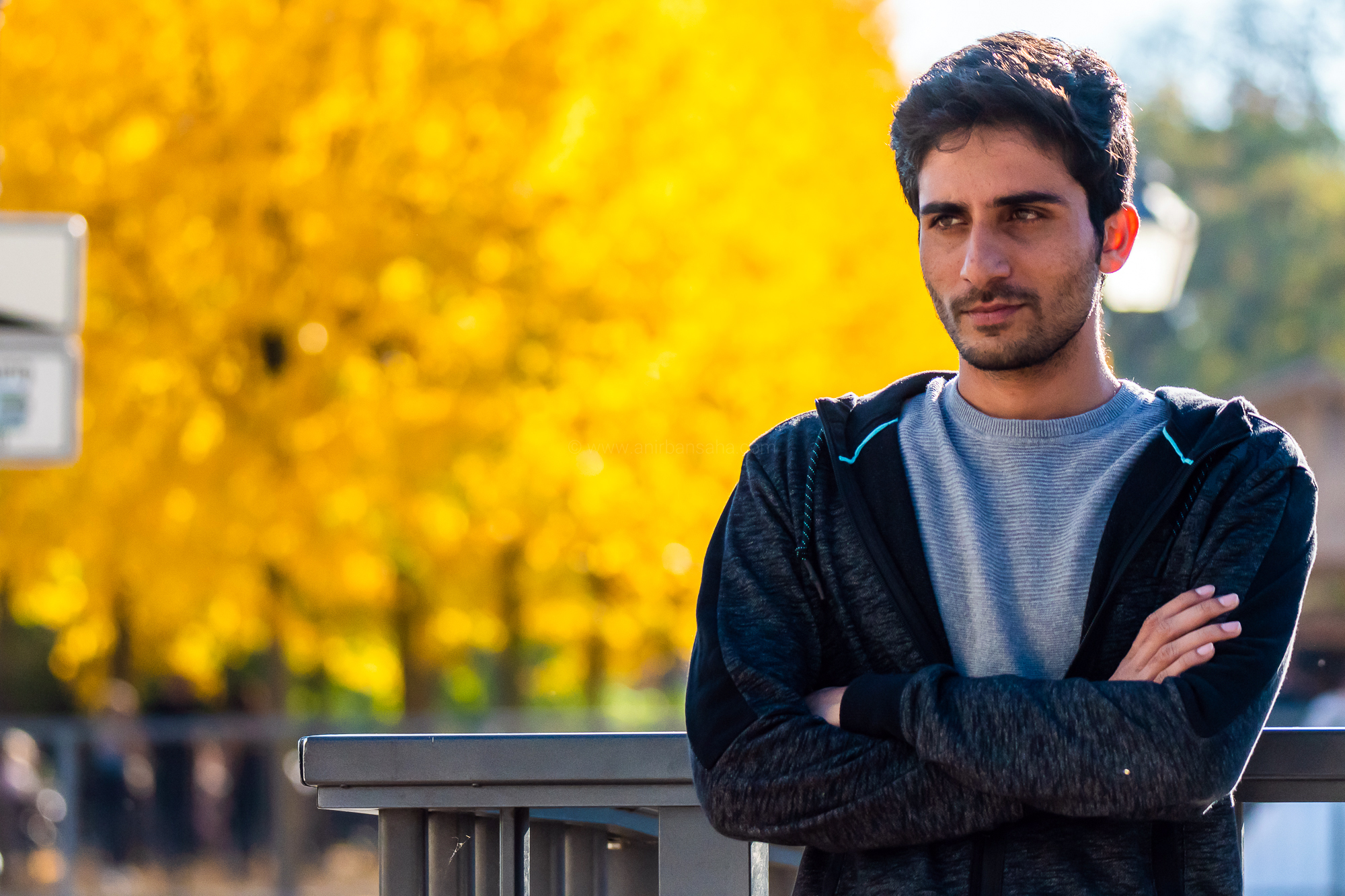 That’s Madhu when I ask him to pose seriously. 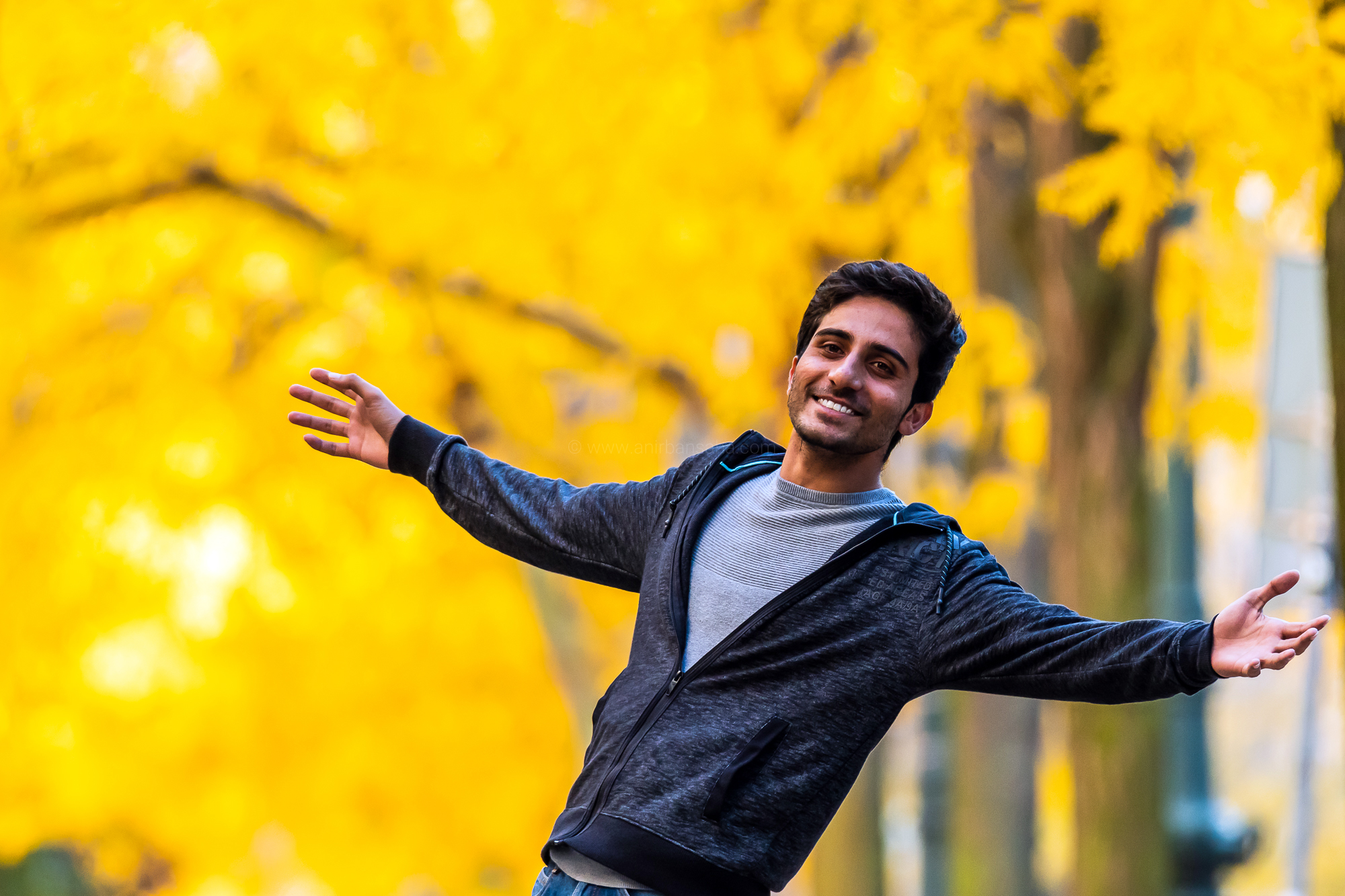 ..and that’s Madhu just being himself. Please notice the background more. 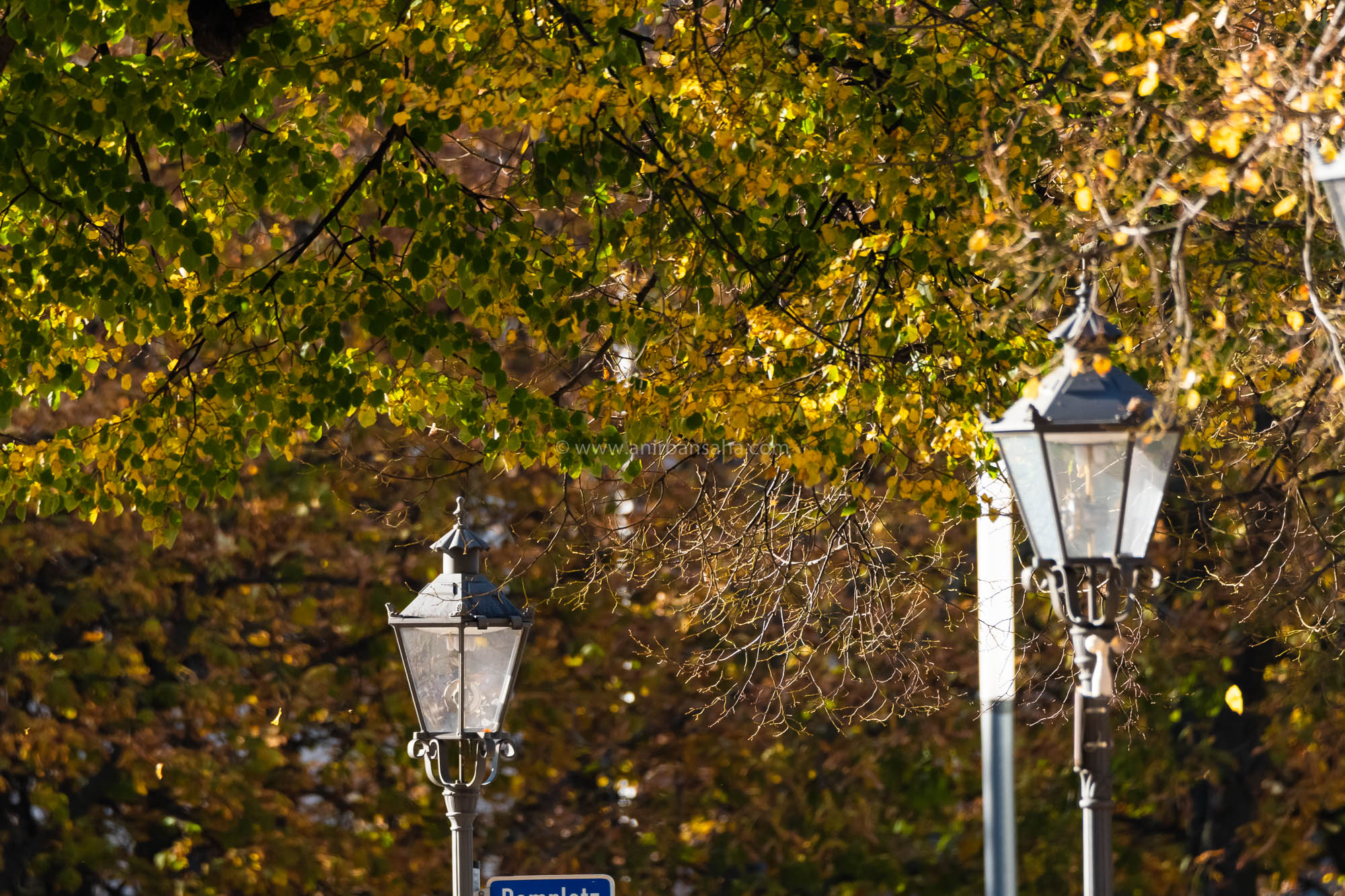 Random street lights near the Dom 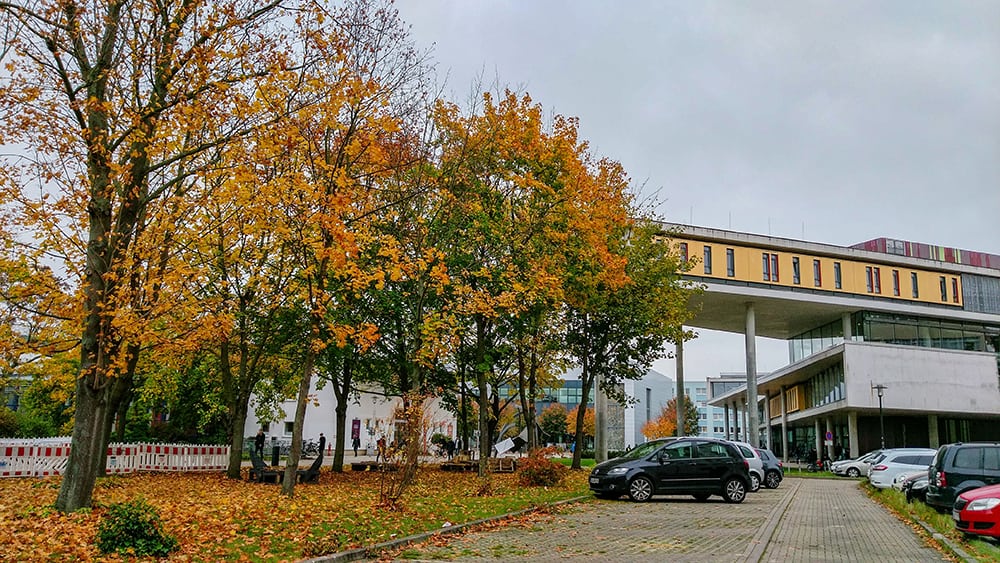 Inside the university near the Library. 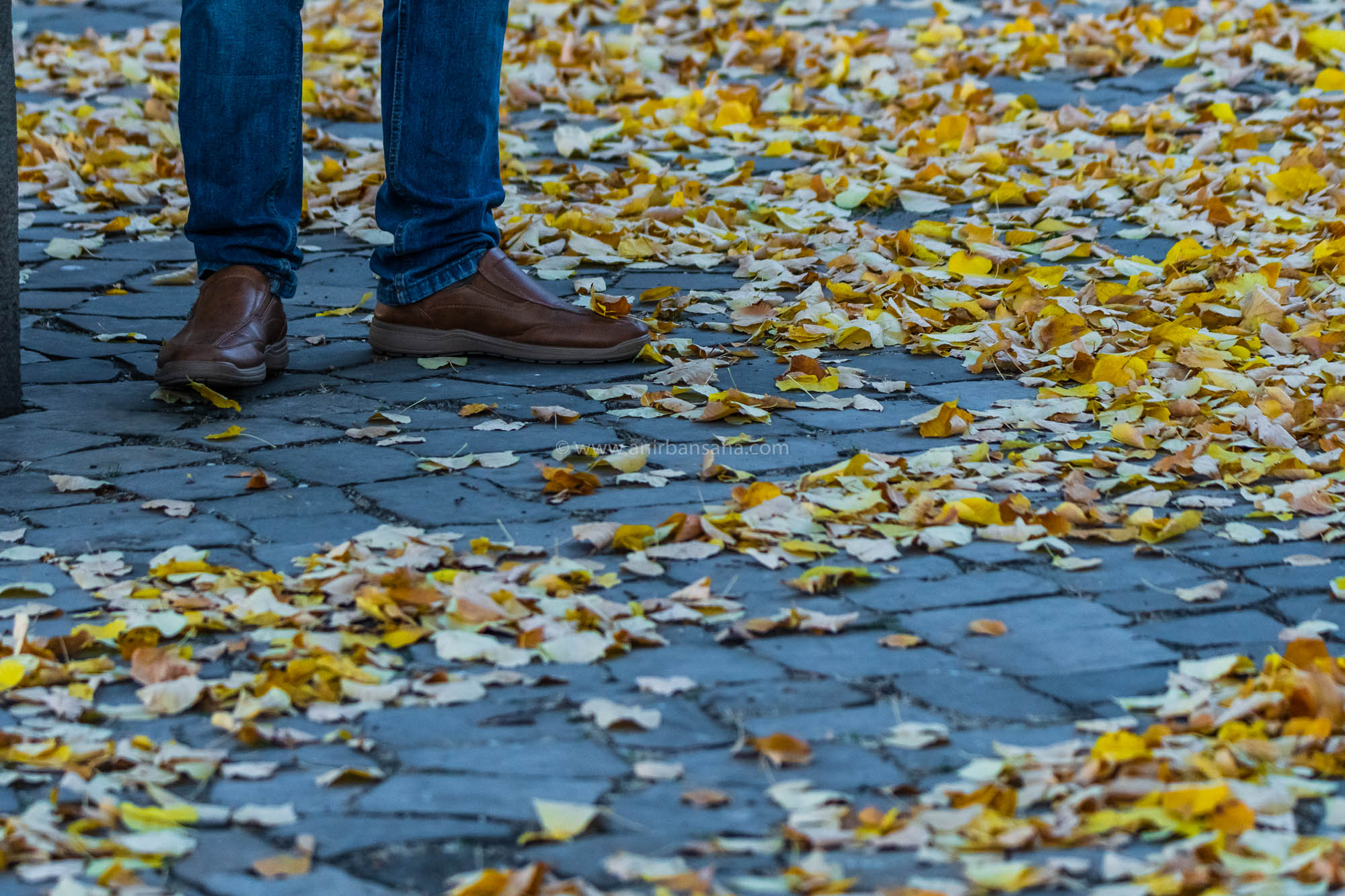 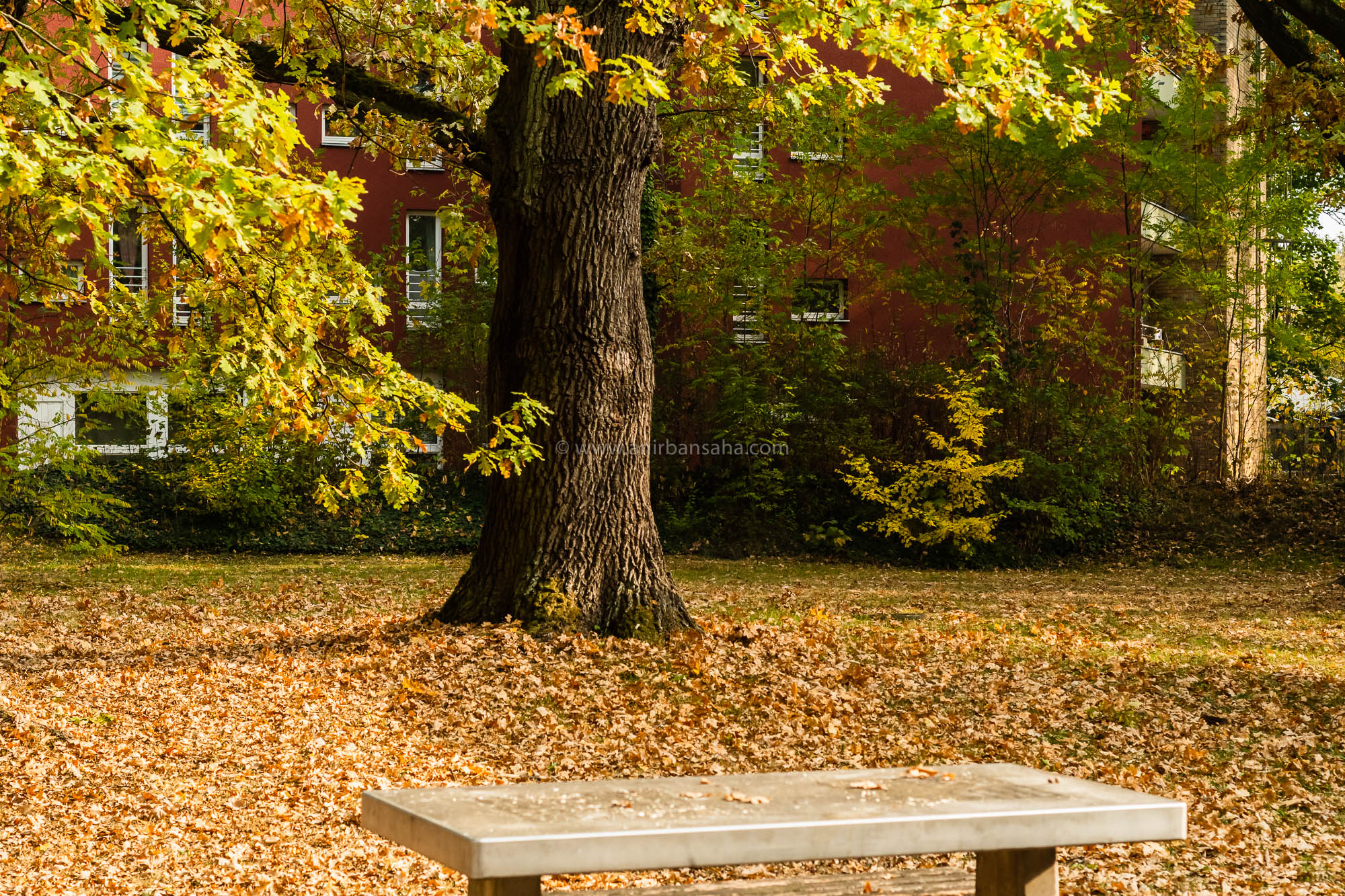 That’s just another open space covered with the autumn colours. 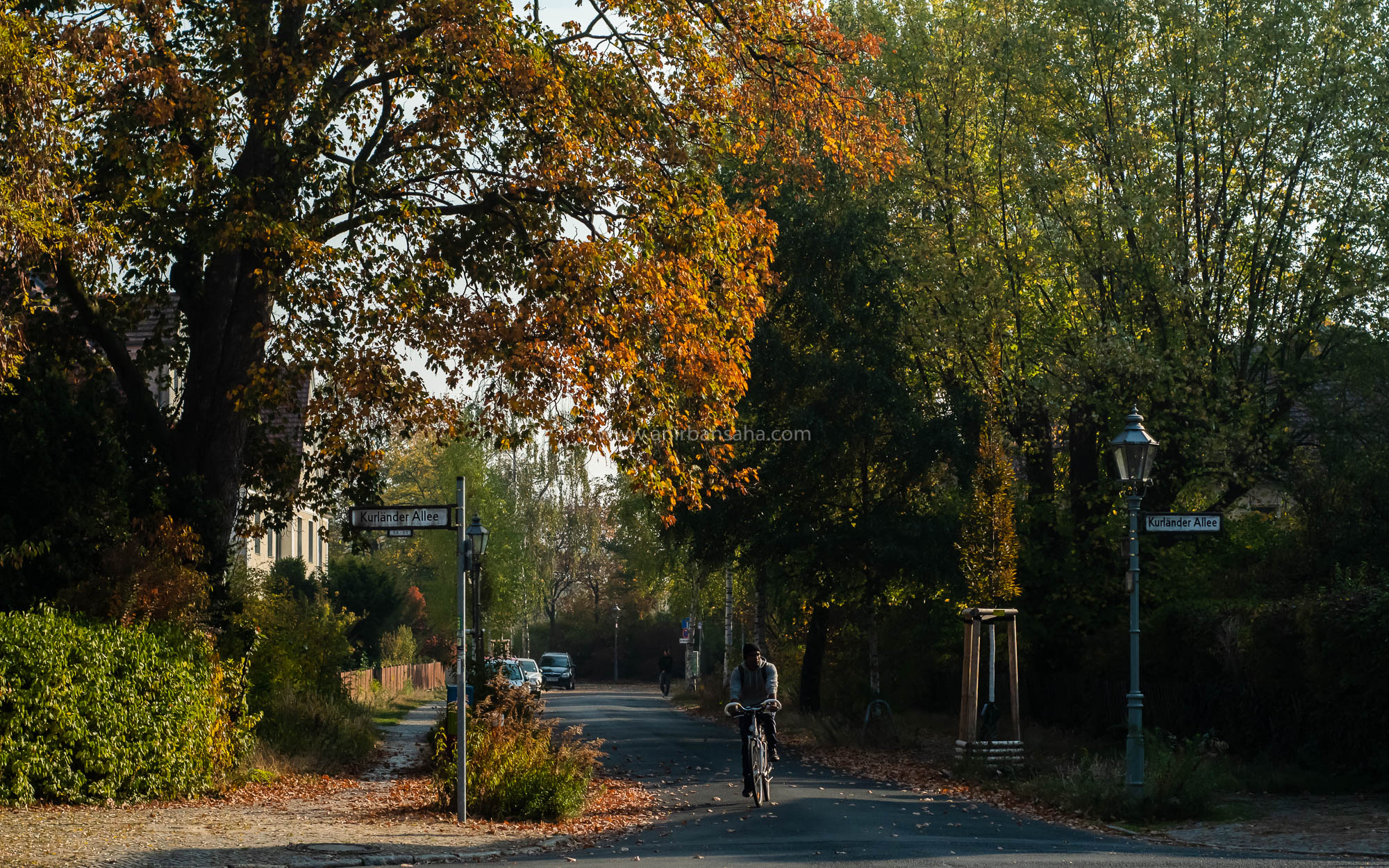 A pathway near the Hasselbachplatz 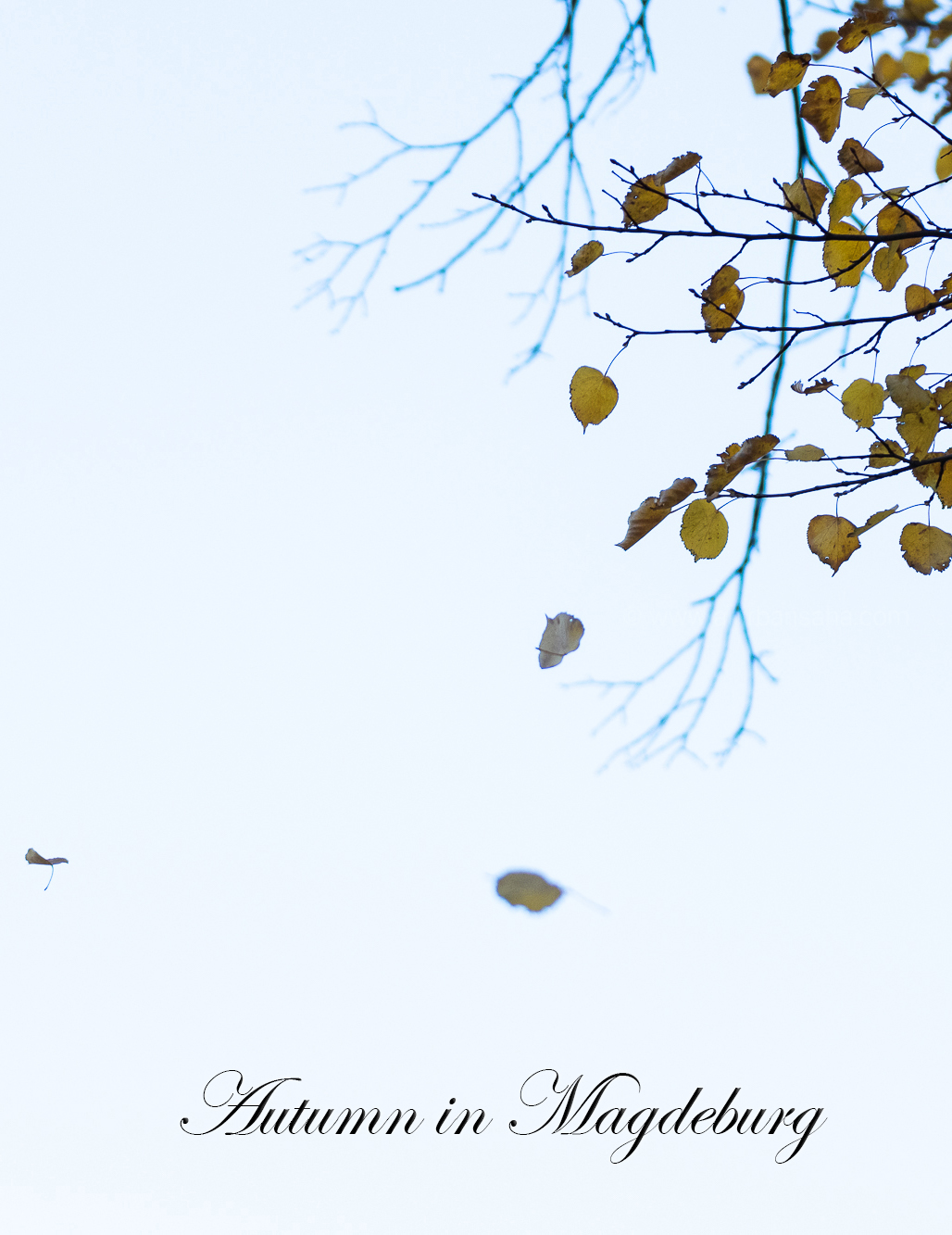 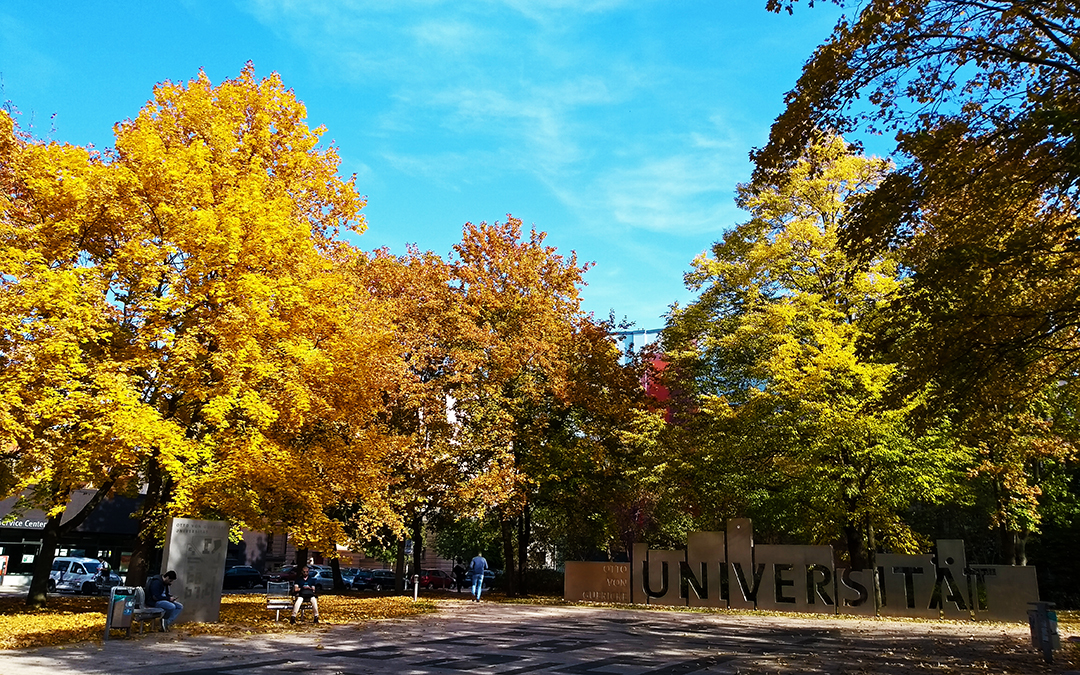 Also, Durga Puja even it’s for a day!
Now that I was missing Durga Puja so much, how can I not visit one, especially when the nearest one is in Berlin!? It’s homely. The moment I reached there I offered my help and even before I could realize, I felt I was one among the organizers, cutting fruits or doing some arrangement for the pujas. I’ve never done that ever in Calcutta!

So yes, this a newer autumn festival for me, a newer Sharodotshob for me this year.

Subho Bijoya. If you happen to read this, please accept my heartfelt greetings on of this festive season. For us Bengalis, festivities have just started and would continue till Christmas. 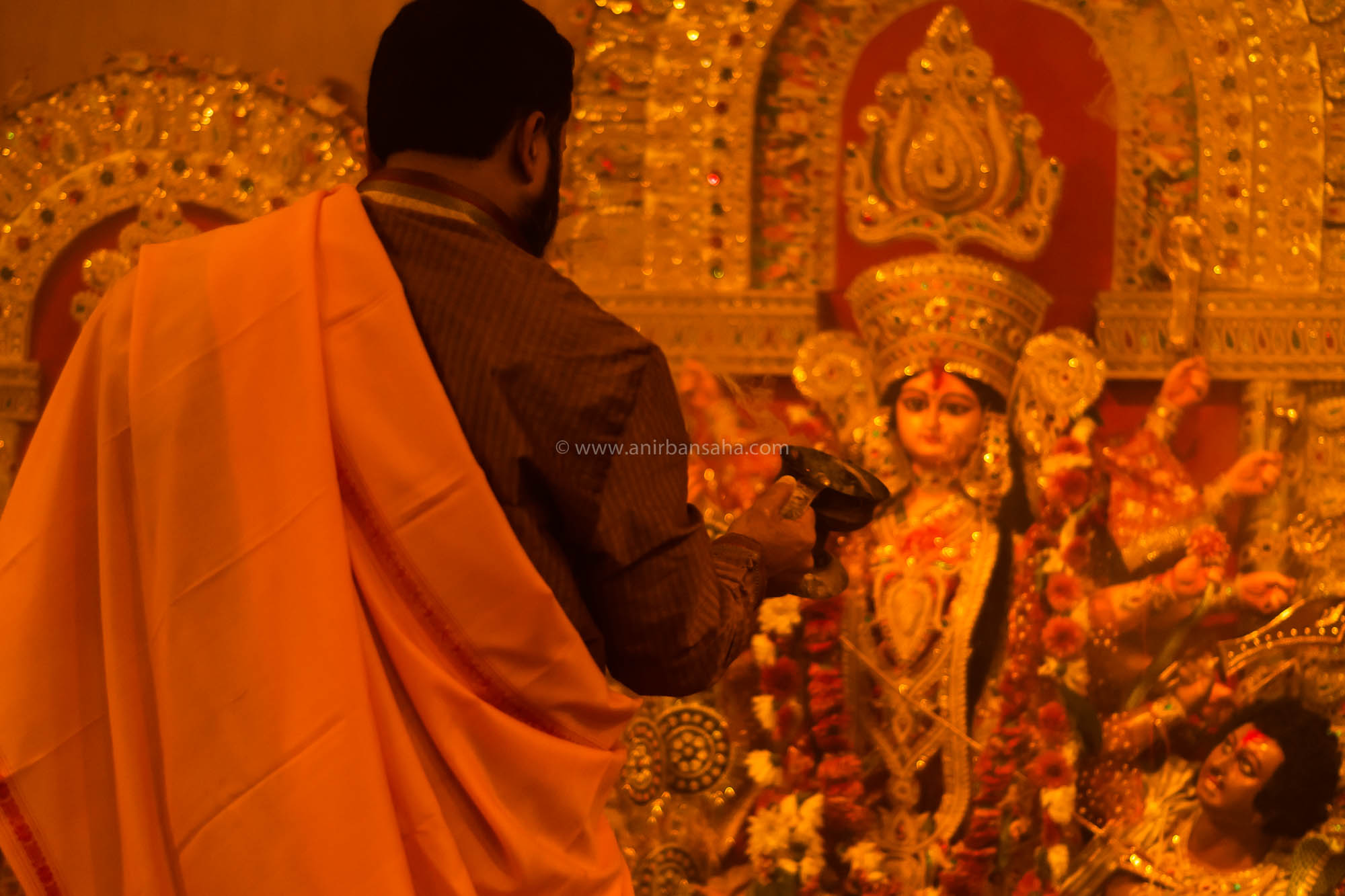 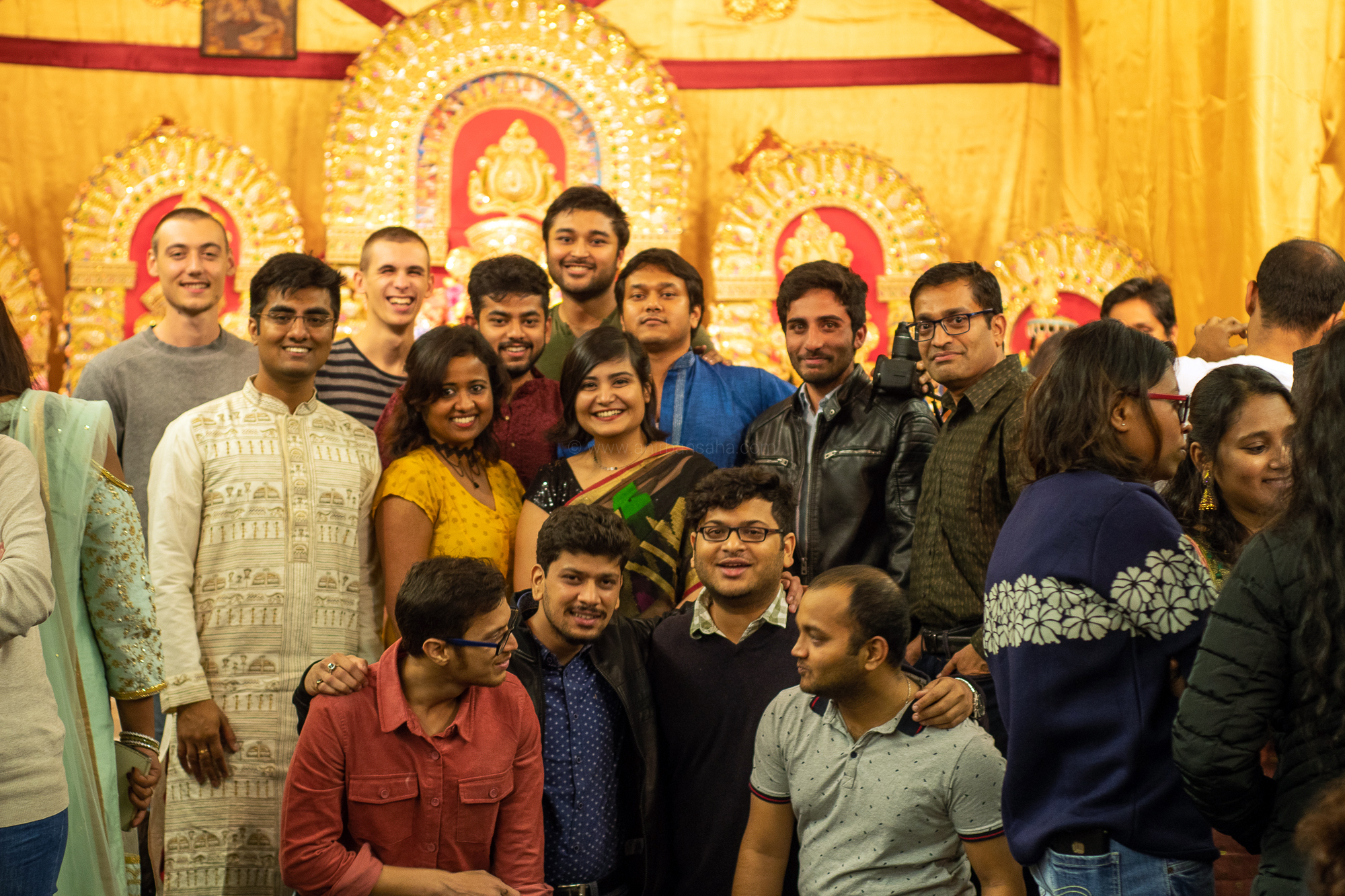 I bring 3 friends, each brings 3 and the group just gets bigger!

*But since I am Anirban Saha, how can I not boast about how great or creative Calcutta is? This year, there were “pandals” that spoke about Child labor (link), about the life of prostitutes (link) and other pandals which showcased the lost art of “shola” in Bengal. There were pandals like that of Sreebhumi which was just grand or perhaps like this one, which made the idol for the visually-impaired to touch and feel (link). That’s just a few, there are 3000+ of them. You can check around 40 of them here in The Puja App. That’s my Calcutta for you. Subho Sharodiya.