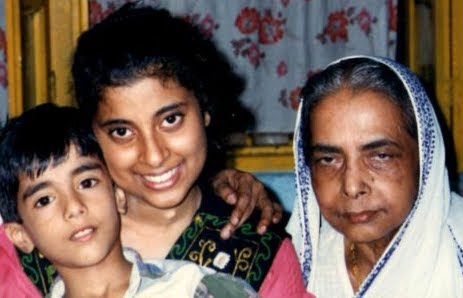 Me, my eldest female cousin and my grandmother. [Year: 1998]

My grandmother, Thamma as I used to call her, was perhaps my first friend. When my mother used to be away with my sister for her music/dance class or perhaps her tuition classes, I sneaked into Thamma’s room and either did my school homework or play chess or listen to stories of Krishna and Chaitanya.

She taught me how to play chess. I loved the way she once explained the role of the queen – to defend the King, the cause and the pride. Had it not been my grandmom, I might not have been introduced to Tagore. She was knowledgeable enough to recite or sing a relevant song in any occasion. A Vaishnav that she was, she was an avid reader of Tagore and Sri Chaitanya. She even named me – Shyam, my didi – Radha and my second-eldest cousin – GourHari.

A lady who got married at 11, lost her first child, fought against the acute poverty, built enough confidence in her children to pursue higher education, allow them to go abroad and live their lives. She allegedly never gifted her children any luxury, instead gifted them books. She had her almirah of books and used to read a couple of hours every day even during her last days. She was a stern believer in personal development and freedom of choice. When I could not get admission to a supposedly elite school and my relatives were busy mocking me, Thamma very calmly said – The student studies, school doesn’t. When my ‘mejo jethima’ wanted a divorce after more than 20 years of marriage, she had my grandmother’s support.

She had been a very strong character herself, proud of her children, her weak moments include the time in late 1970s, when she asked my father to stay back in Calcutta. Everyone else had relocated. I had hardly seen her express weakness or love. Year 2002, we decided to leave our Gouribari residence and move to Dum dum park. She was left alone with her aid.

The first time I went to my new “home” from school, how I wished the bus took left from Ultadanga and took me back to my grandmother. At times, without informing my mother, I used to go to Thamma.

The last working day before our school closed for summer vacation was May 16th, 2003. I went to my Gouribari residence. The aid was not there. I climbed up the window, managed to push it open and screamed “Thamma open the door!” She woke up hurriedly from her sleep and murmured “Gourhari, have you come?”. I realised that she was expecting my elder cousin. She loved him the most. That day we talked about my upcoming summer vacation and how she used to spend her summers back in her home, now in Bangladesh. She had many trees. She said she missed that here in Calcutta. I left her promising to come back the day the school re-opened on 16th June.

Well, I did go to my Gouribari residence on 16th of June but to only see Thamma for the last time. And perhaps be with her on her last ride. As the only grandson available, I had to be with her till the time my father had to push her into the crematory oven, infront of my eyes.

While going to the nursing home, she recited some Tagore poem and her last wish was to meet ‘GourHari’.
GourHari, my mejo dada, definitely did not know of this. Else he would have come. He is now the Director of Strategy, Google. Thamma must be so proud somewhere up there blessing all her grandchildren.

I had lost a friend and not till 2008 did I talk properly with anyone. Supporting elders does not necessarily mean giving money for them to survive. One needs to make them feel special by being there with them, live their ideals. They are the ones who helped them become who they are. Think about it.

This is an entry to the blogging contest by Support Elders conducted by Kolkata Bloggers.  “Support Elders” initiative is doing some incredible work and to be associated with something like this is our pleasure.

‘Mejo Jethima’ -> means wife of the second eldest brother of my father.

‘Gourhari‘ -> is another name for Sri Sri Chaitanya Mahaprabhu, a Bhakti movement reformist.