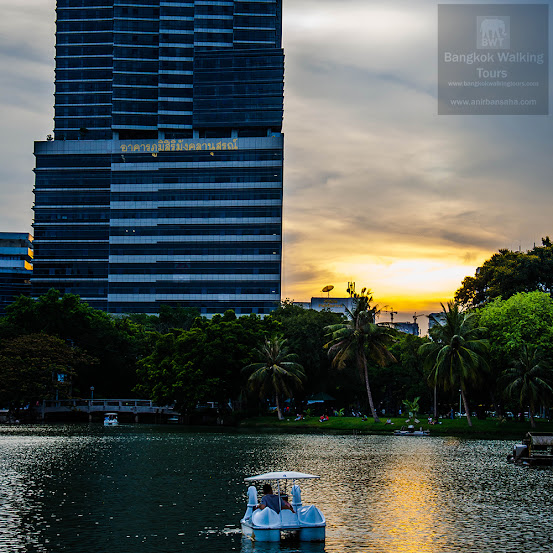 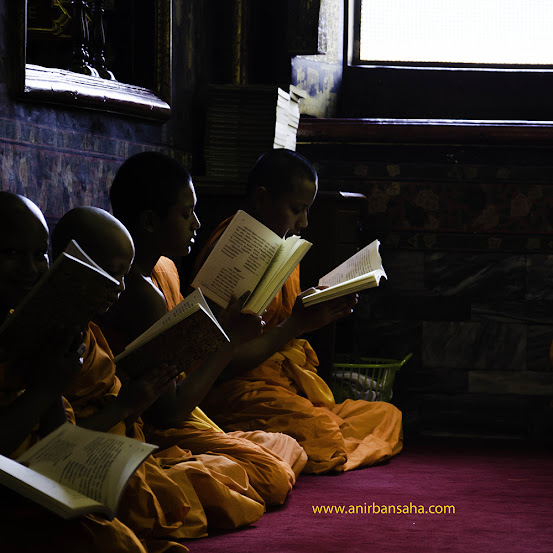 It has been slightly more than a couple of months I’ve come back from Bangkok and I’ll be honest, I miss Bangkok. Kolkata and Bangkok, each has its own charm. The easiest way to state this fact: The oldest university in that region is younger to Kolkata. Both have metro trains and waterways, Bangkok has better machines. The city is apparently cleaner, there are way too many malls in Bangkok and people are disciplined and punctual.

Back to Kolkata, mixing with all the people around, I miss the solitude I enjoyed there in Bangkok. I was trying to help Amarthya da (Konrad Legal) with blogging during the day while during evenings I explored the city.

Problems I faced in Bangkok:

1. The Language barrier: Most of the Thai population do not understand English. They understand and respect the difference. When I used Google translator to explain things, they were patient. There are many expats, those who have settled in Bangkok. They speak English. I have met Dwight (food blogger) and Ian (travel blogger). And yes, I learnt two words in Thai – Hello and Thank you.

2. The Food: Thai food in Thailand tastes dramatically different from the kind of Thai food we have in India. I am a person who never took any interest in culinary pleasures. I eat anything to have my stomach full. I literally had to survive the food there and in my next blog post, I’ll tell you why!

Of the very few things I desperately miss, is the peacefulness of the temples there. I’ve never been much of a religious person, but yes a monotheist spiritual one with an interest in stories that revolve around religions. If you are like me, there are chances, you would love Bangkok as well. They are peaceful, organized and the monks are never busy! 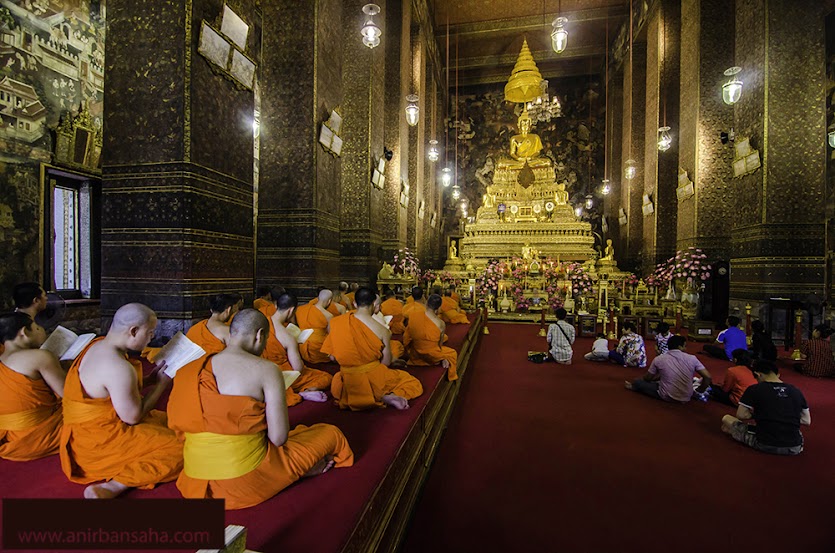 There is this river, Bangkok’s answer to Calcutta’s Ganga or London’s river Thames… offers you very colourful sunsets. The metro station nearby is Sa Pan Tak Shin (I hope I remember the names well). There is a sprawling market place, a twin tower one of which is supposedly haunted. The haunted place gives a good view for photographers. You might try the public river boats. We have similar steamer services here in Calcutta, but somehow noisier.  From one of the points there, there is a free ride to Asiatique market. Asiatique market is very expensive! But yes, that has this giant wheel. The hotel with the best view of this place does not allow photography.

The evening boat rides, after the sultry hot afternoon, with the cool wind brushing across your face, seems blissful.  You get to see tall well-lit buildings with a few temples here and there, intercepting your imaginations! It feels good. 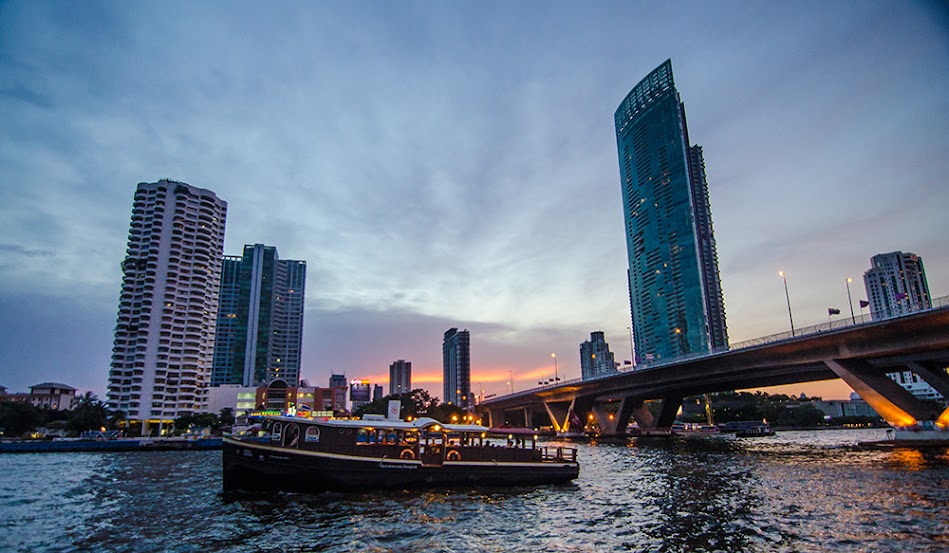 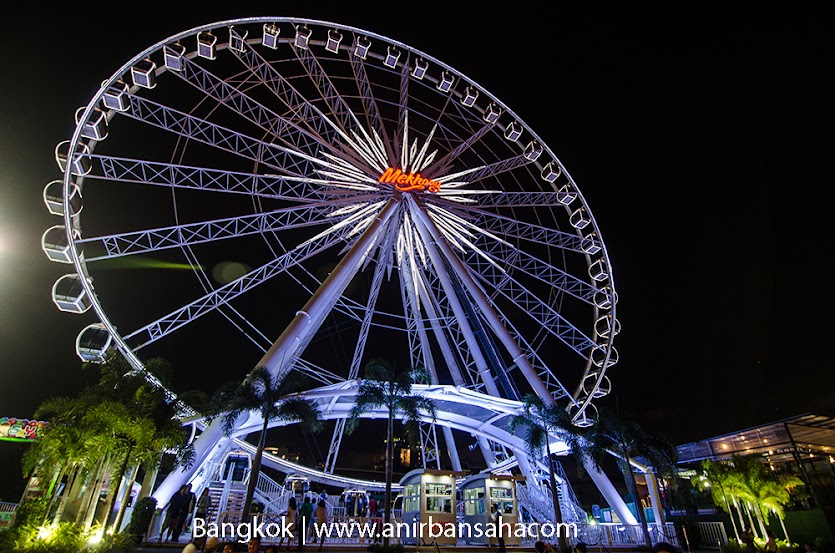 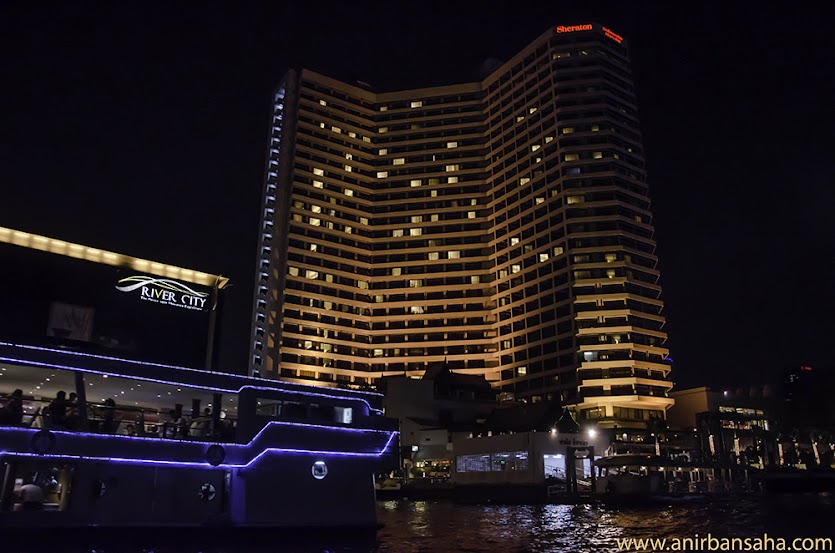 Through the riverways | Bangkok 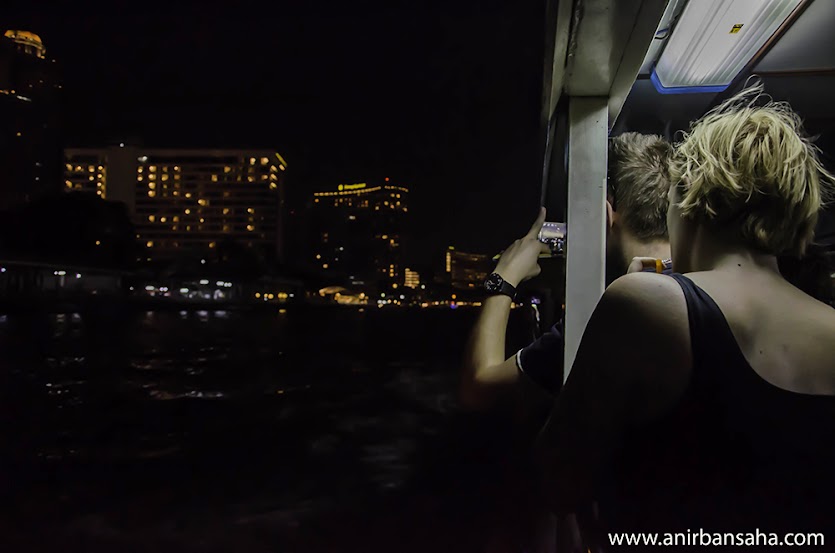 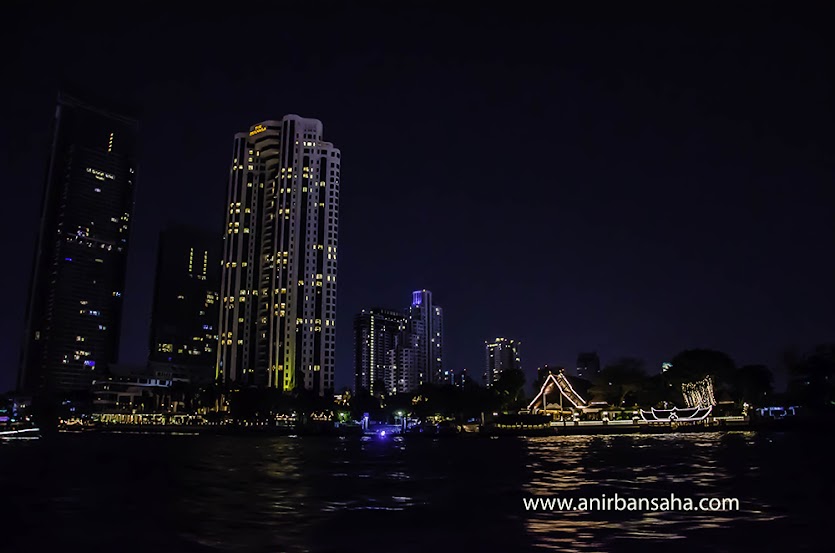 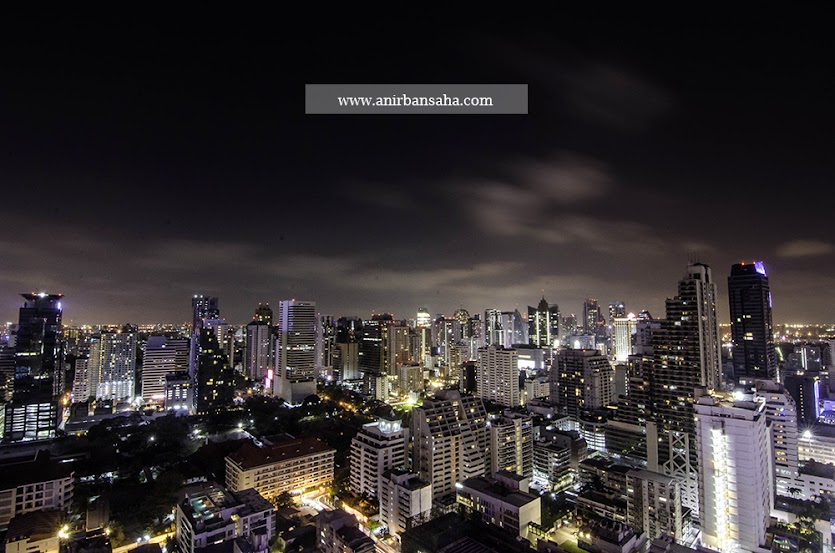 Bangkok skyline from one of the building rooftops in Sukhumvit. 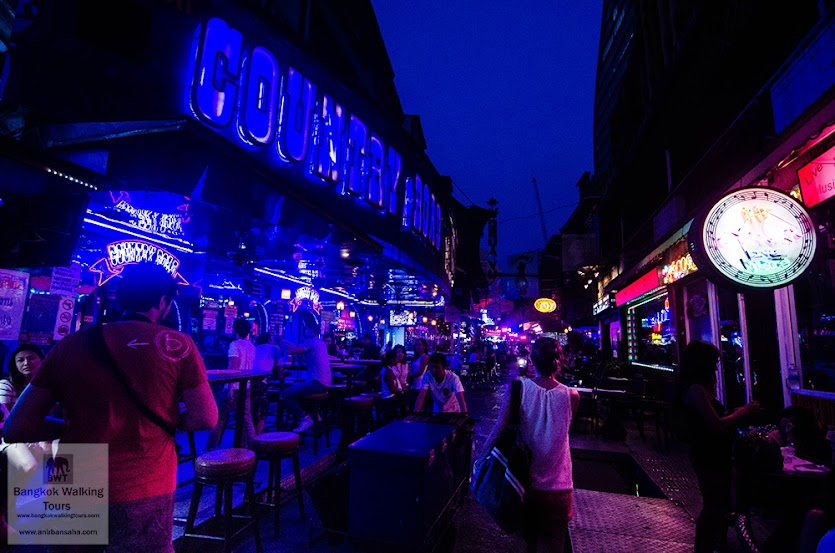 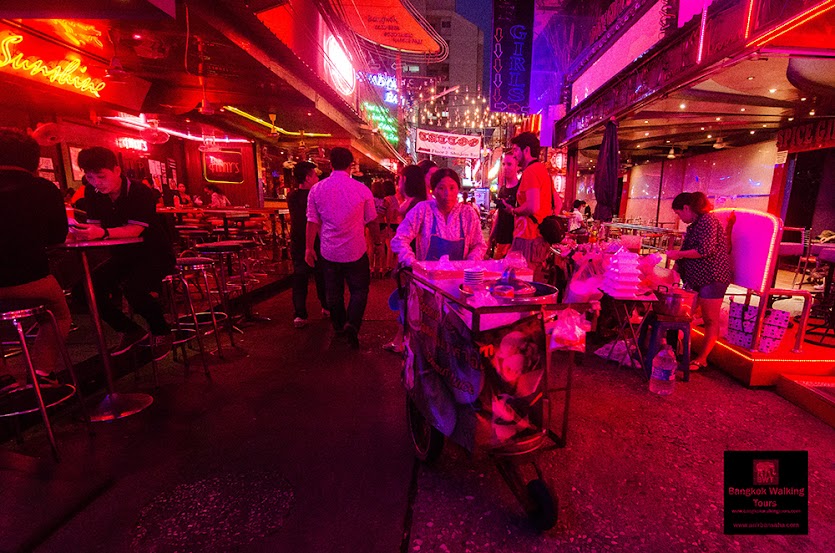 Bangkok has a thriving night-life. Something which Kolkata desperately requires. By that, I do not mean night bars and discos only. I had a haircut in a unisex parlour way past midnight. The major eateries are open, musicians play music. Taxis are available and they do not ask for extra money!

Bangkok is (in)famous for being one of the sex trade capitals in the world. Be informed, prostitution although practised, is illegal there. Blame it upon my upbringing, the idea of being inside the go-go bar for a long time seemed an unsettling idea. But the inquisitive brat that I am, I have however peeped into almost all the bars that were accessible regardless of the kind of audience it catered to. 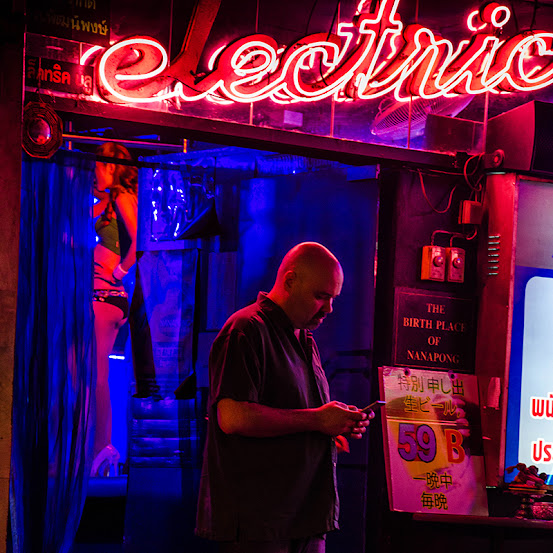 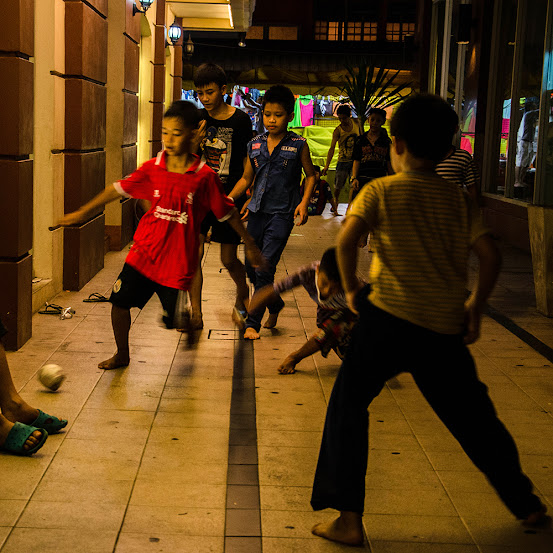 The place where I used to stay during the daytime happened to be closest to the world’s supposedly largest adult playground. Don’t spur your imaginations much. By the time this part of the city came to life, I had to go back home. I stayed near MRT Suthisan. But nevertheless I have shot a photograph of the gate,  during the sunset. 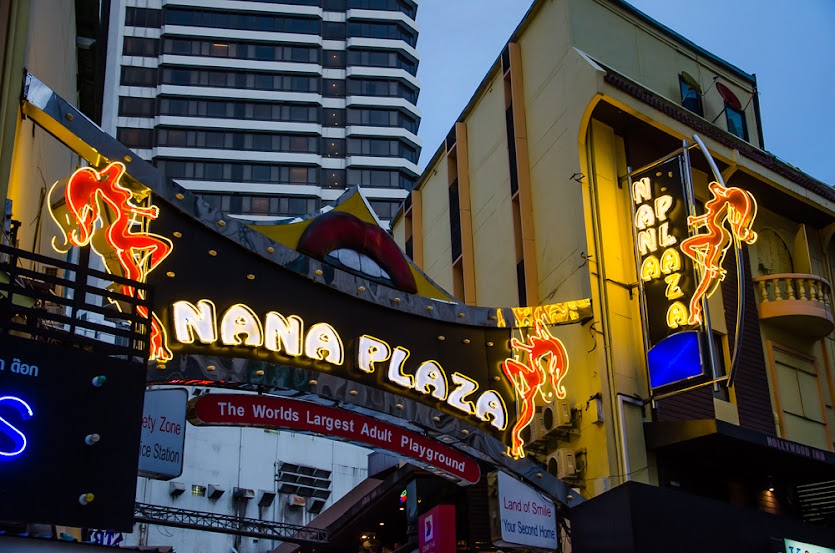 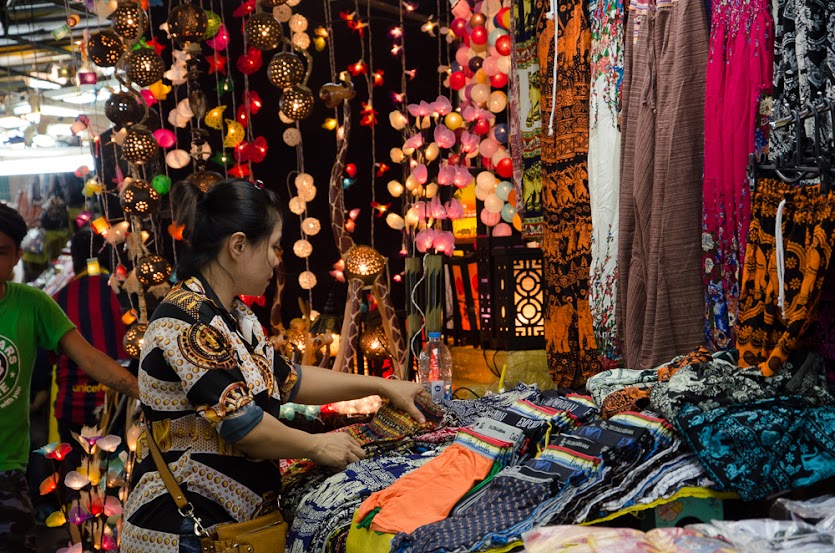 Near the Silom area, there is a huge market. There are markets every where though. The cheapest being near the Hotel Prince. Do not ask me where it is, I booked a cab to go there. If you plan to shop at Silom area there are two things you should consider:

2. Do not be surprised, disturbed or uncomfortable if you find umm, penis shaped ashtrays, or candles or key rings.

3. The cheapest beer is perhaps near Soi 2. But careful. KFC there does not really taste like KFC here in Calcutta. Subway outlets are good.

Markets are mostly crowded by the tourists. It’s weird. They associate the word “Indian” with “High Bargain”. 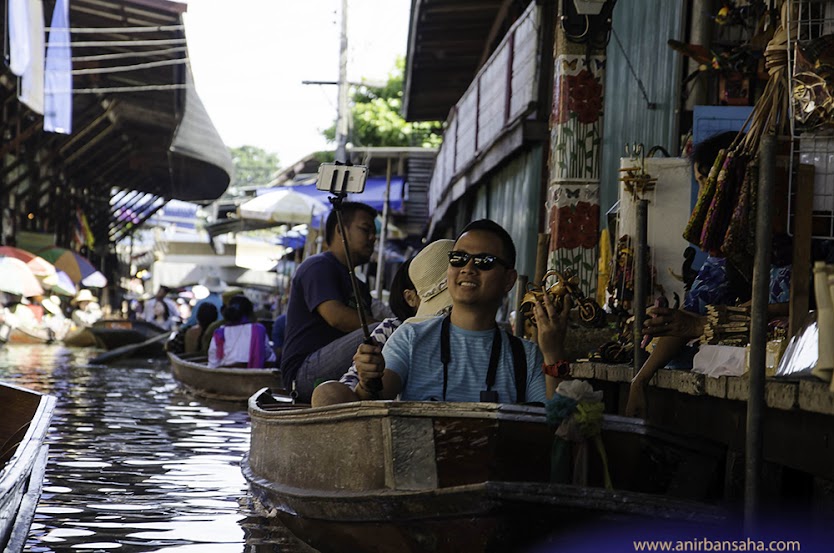 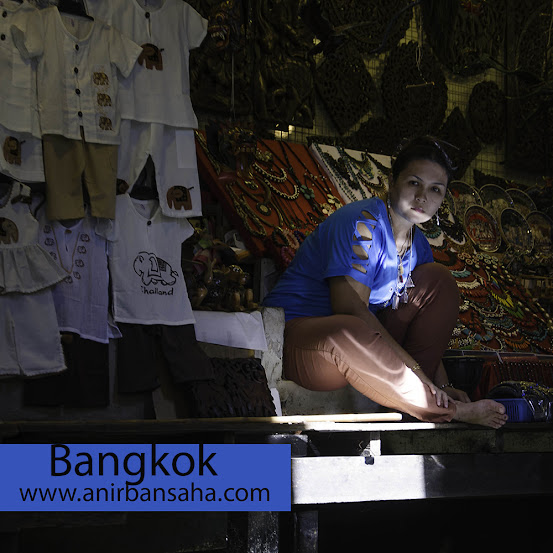 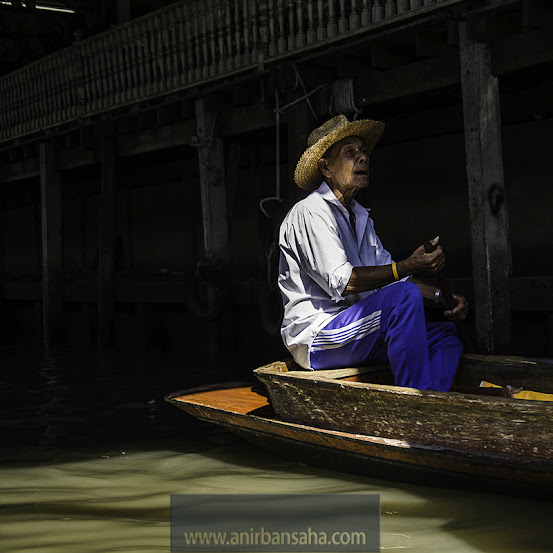 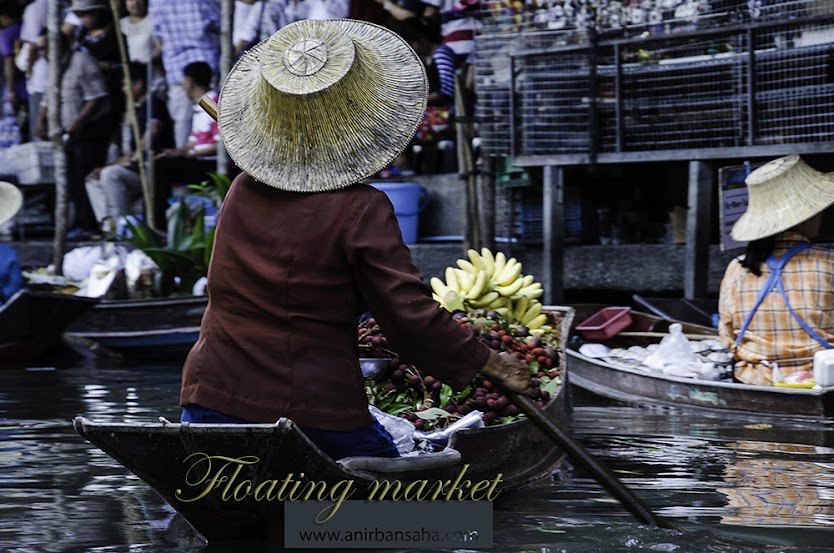 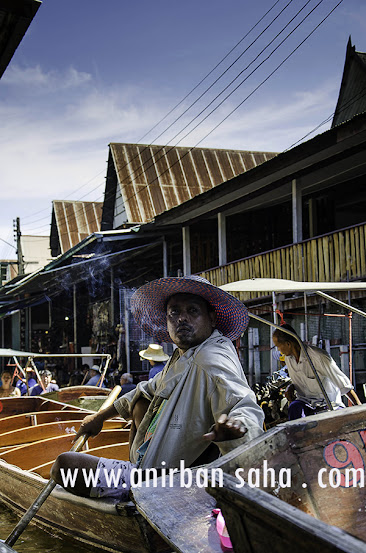 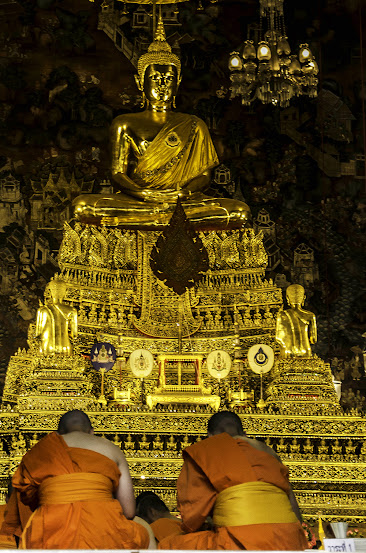 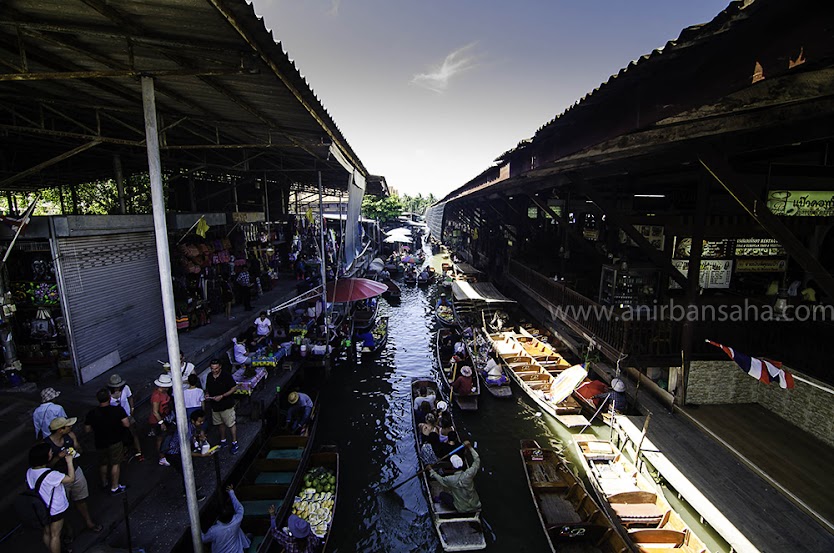 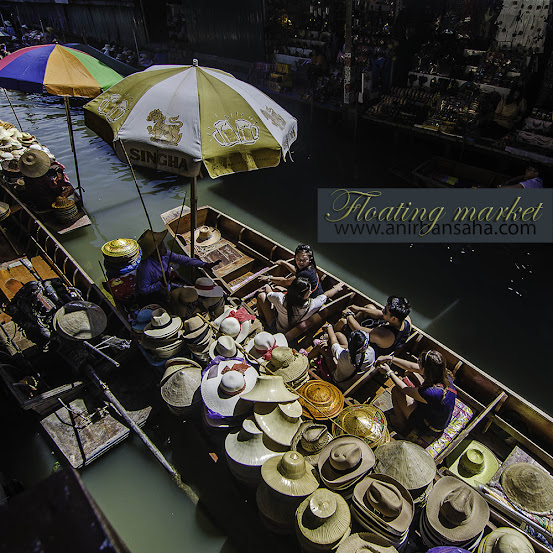 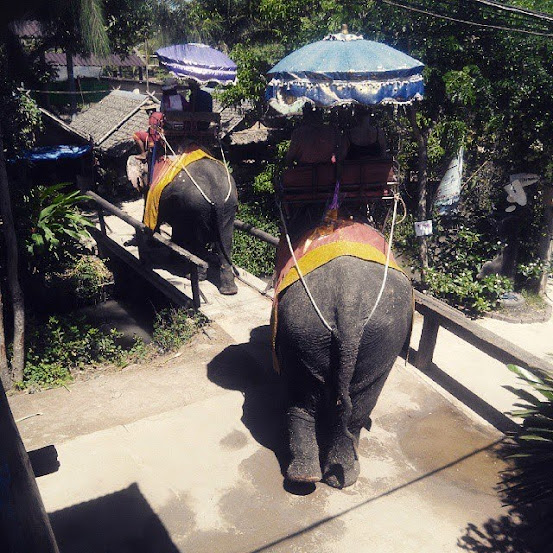 Talking about tourists, there is this Damoen Saduak floating market which opens at sun rise and wraps up by 11 AM. If you are solo travelling, I would recommend cheap travel agents. The cheapest ones are around 650THB. But keep some more money with you. They do not include small boat charges. There, at the floating market, you would see people who would click your photograph, print and frame it and then try to sell it to you. If you refuse politely, they would go extremely soft and will make you all sentimental. The floating market people charge 100THB and give good quality print and frame.

If you are with friends, hire a car. The cost would remain the same. I could not afford it and missed the sunrise shots there. When I reached, it was already crowded.

Most probably, you’d be taken to the place where they’d charge you 650THB for one elephant ride. The people there too would photograph you, paper frame you and they’d charge you 250THB. There is a crocodile park, where I could not go because I had exhausted my cash!

Umm, there is this place with a very complicated name. It is the meeting point of all travellers and the artisans there carve out teak wood to make designs, depiction, statues and furnitures. They can make minute details of the design. I’ll attach a photograph. This was hardly 2 feet of a 35 feet design made for more than 2 years of regular work.

One of the best people I’ve met was while touring with Bangkok Walking Tours (link). It is owned by two people slightly elder to me. One of them is Spanish, Pol Comaposada (I hope I spelled it correctly). That evening he had 2 of his friends from Spain. The husband’s name is Raul and he is a software developer, into security. All of them were extremely warm and I had a lovely time exploring a part of Bangkok with them. If you go there, you should also get in touch with them.

Not many discuss B-Plans with random strangers, the way Pol did. And since we all were of similar age, we gelled really well. While I was the youngest there, the rest were within 32 – 35 years of age and  very experienced travellers. We discussed Spain, Football (I was a listener then), Bengal (How can you skip this when I am around?) and what not!

Raul and his wife are so warm that they later got in touch with me, sharing photographs that they took of me. 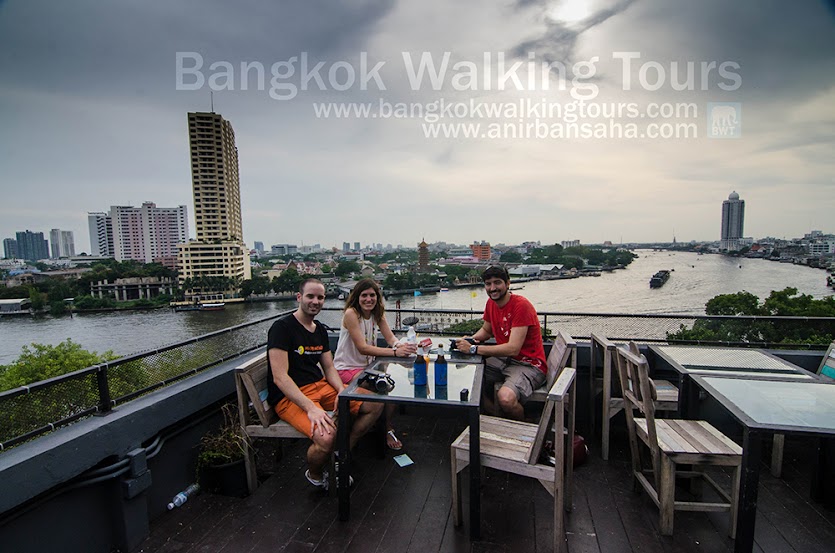 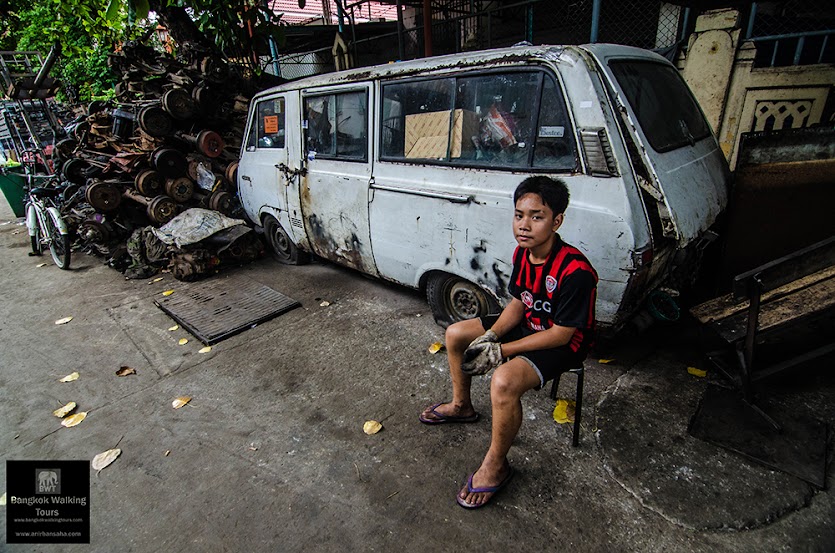 I’ll end this post with two photographs shot at Baiyoke Tower 2, the highest tower in Bangkok with a revolving observatory. IT WAS THRILLING !!!!

Do ask me if you have any question!

A shot from Baiyoke Tower II 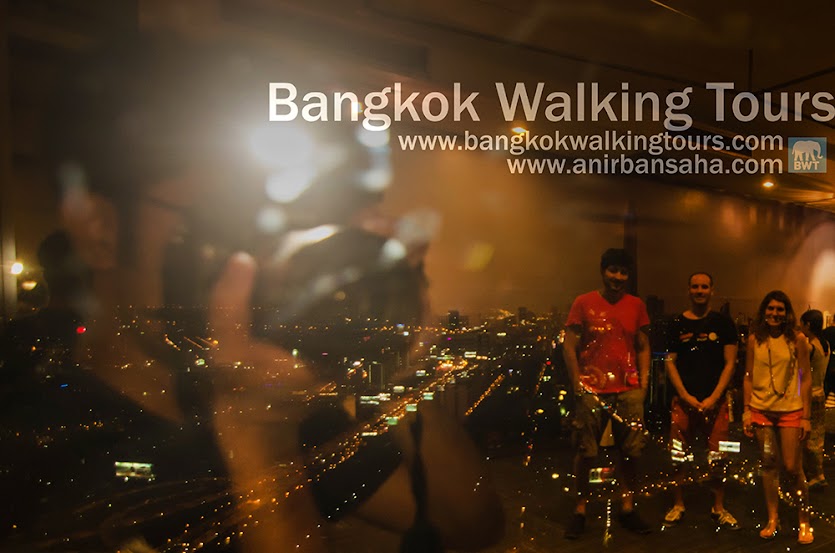