Kanchenjunga | during the sun rise. The view from Ravangla.

Sikkim – the land of exotic festivals

I’ve never been the beach guy ever ! During the sultry Kolkata summers, I prefer staying indoors testing my AC’s ability to keep the temperatures as low as 16 degrees, if not lower. So naturally, mountains have always been my choice when it comes to travel. Be it my first solo travel to Darjeeling and north Bengal, the Meghalaya trip with Harshit and Surrbhi or the very recent trips to Ravangla and Pelling, both located in Sikkim.

While Pelling was a solo travel last week, I went with a few friends to Ravangla during December 17th, 2014. It was the harvest festival and our intent was to photograph Chham. You can read the blog post here. 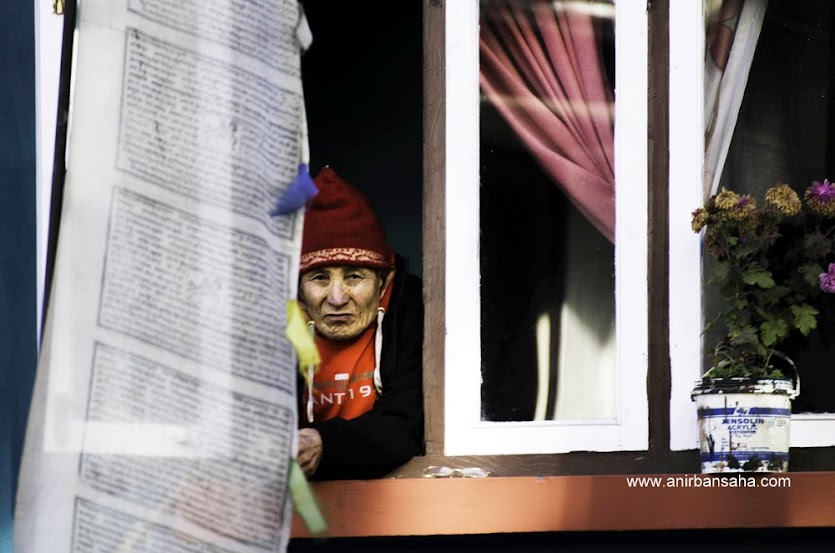 There is something special about the people in Sikkim. They are extremely cordial and helpful. If you are a student, you get special discounts. The puffed rice which otherwise is Rs 40, becomes Rs 20 if you are a student. Similarly, rooms of Rs 1500 become Rs 1200. People are extremely personal in their approach and they never lie to you. As I have mentioned in my previous blog post, I never expected such cordial welcome to a monastery and they allowed us to stay there and photograph. Pemayangtse monastery was however, slightly more regulated and photographing the inside was prohibited. Otherwise, from the kids in the monastery to the hotel waiters, cab drivers or the person who guided with directions were so very cordial. 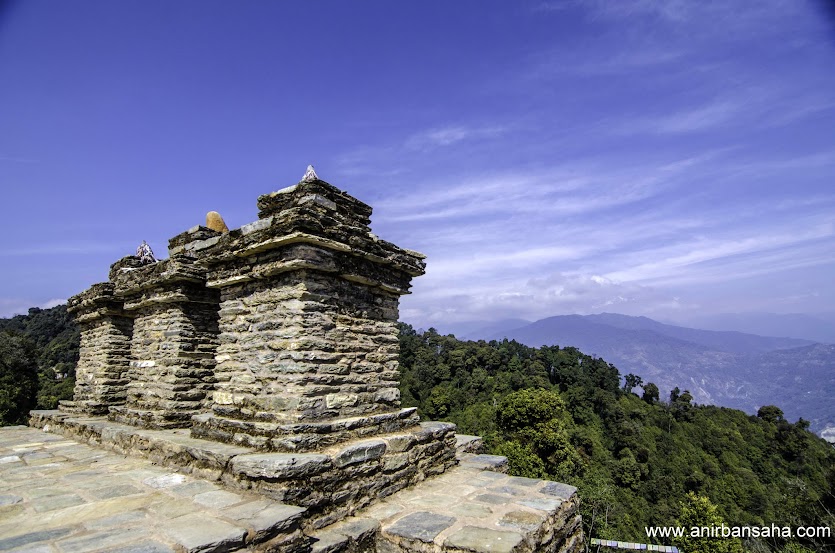 The place of worship | The ruins of the Rabdantse palace.

This is shot in Rabdantse, which was Sikkim’s second capital after Yuksom. The fourth being the present capital, Gangtok. This is some incredible place. From the top, you can see the entire valley enclosed by other mountains. 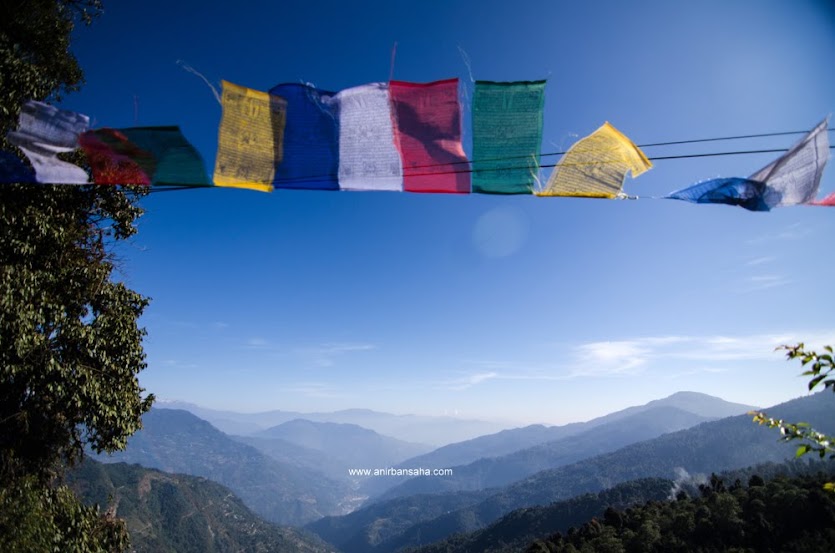 We have 2 Ralang monasteries, the new one being 15 minutes walk up the hill. While in the old monastery we had the kayged festival on, the new one was completely empty. We caught hold of a monk who showed us around. 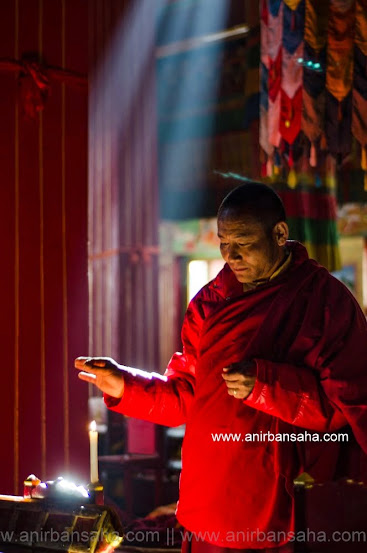 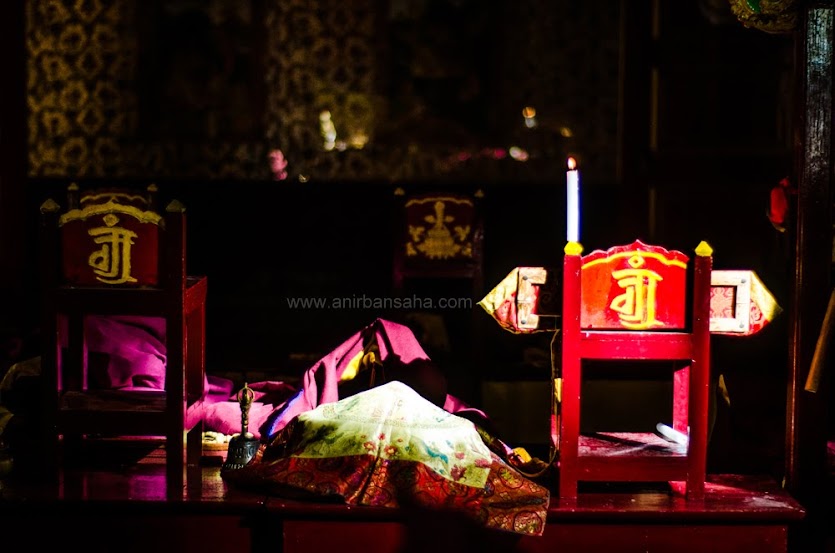 Inside the new Ralang Monastery 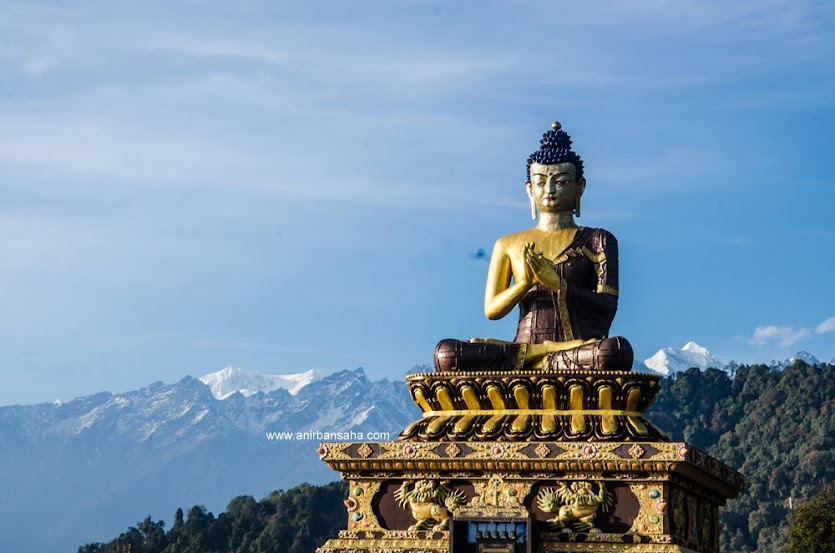 Buddha Park in Ravangla is one of the main tourist attraction. It spans through a sprawling campus. The inside of the museum has the life of Lord Buddha explained using paintings. The inner shrine is something that shall amaze every one.

The nearest airport is Bagdogra. If you are travelling with a student’s budget.. get a bus to Siliguri. If you are travelling from Kolkata, it takes five hundred rupees approximately. You can get a shared cab to Jorthang, Geyzing, Simptham. For Pemayangtse monastery, you should stay either in Pelling or Geyzing. For Ralang monasteries, you should stay in Ravangla. You can get a cab to Ravangla from Simptham.

Way to Pelling from Pemayangtse monastery

Inside Cafe in Pelling after the walk

You can walk all the way from Pemayangtse monastery to Pelling. It is a 2 km long walk. This has been one of my best experience in hills so far… It was near 2 degrees and drizzling, while I walked my way through. Finally ended up in a cafe having Darjeeling tea with a friend of mine. 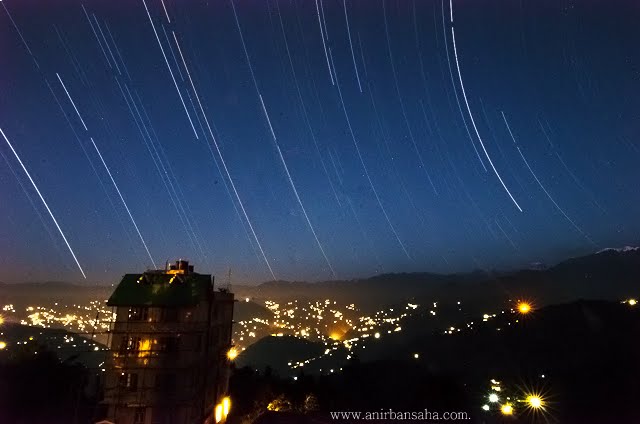 My first attempt to star trails.

I had never seen a clearer sky before. This star trail in Ravangla is my first attempt, a combination of 8 shots of 25 minutes exposure time each. 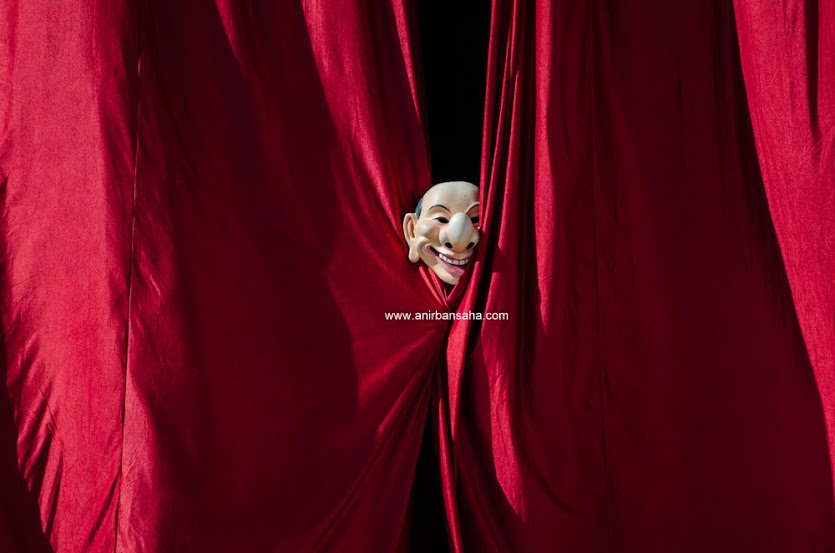 I hope you’ve liked this blog post of mine. Stay in touch and leave your honest opinion.