“Who was the first man on earth?”, asked Baban Das Baul.  After a moment of silence, I said, “Manu?”. Ramasish rubbished the idea and said, “It is Adam and Eve.”.

I knew no Baul when I reached Murshidabad. Hours ago before I boarded the train, I gave Mrs. Ratnaboli Bose a phone call seeking information. Her website Daricha, that once used my photographs of Tusu, was the only website to give me information about Jalangi, a village Shreya had informed me – is the hub of Bauls in the region.

It was only a matter of moments, after having left home, I saw a man dark skinned, thin, with not much wrinkles on his face. His hair was long enough to cover his nape, curly, oiled and properly combed. “That kind of hair is perfect for a Baul”, I said to myself. Without any further thought, I approached him and inquired about the place and where I can get Bauls. He looked surprised.

On further discussion, he introduced himself as  Baban Das Baul, one of the most renowned Bauls in the state. During the very short interaction on the first day, he thought of putting the records straight – There is no God, there are humans. Being a Baul is being real and not living in anticipation or creating imagery. Humanity is the top priority for the Bauls. 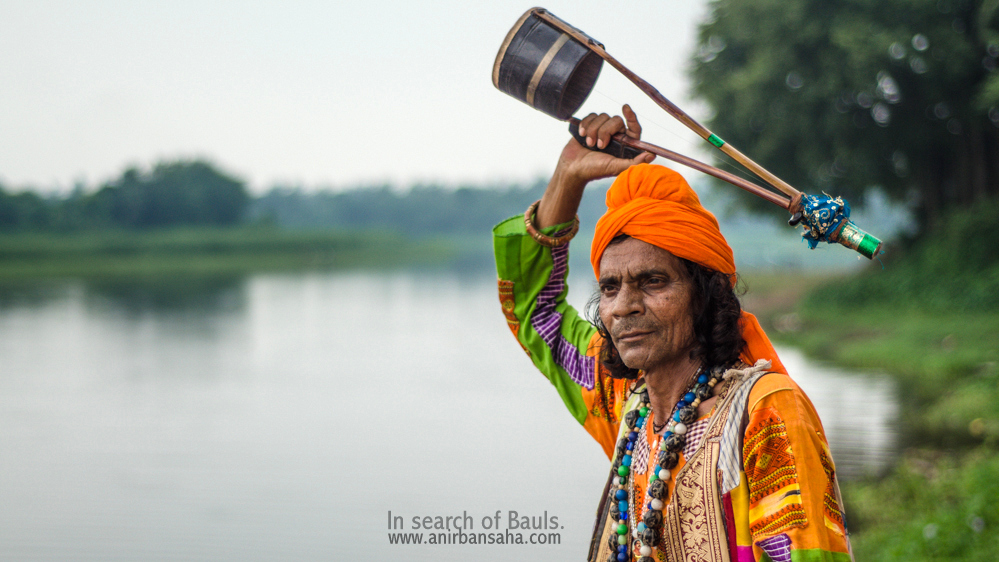 On the second day, we met near the cemetery ground and sat near the river, it was serene. The children were playing by the ghat, a few of them trying to row a boat. The Temple right beside us, had frequent visitors. The lush green background and the rhythmic alliterating sound of the river was soothing music. A perfect set for our discussion.

“We sing of human feelings and not about God.”

“Tell me, how did the Bauls come to existence?”, he asked.  I did what I do best. I kept quiet. “It was popularised by Sri Chaitanya Deb.” was all that I managed to say. “But someone introduced him to it. Do you know who it was?”. Later in the discussion he said, Chaitanya had four Gurus, of which one introduced him to Baul culture. The discussion continued to the 14 other gurus after Sri Chaitanya who preached the philosophy for more than 530 years.

I nodded my head in affirmative. Check this video out before we proceed any further. (Please ignore the glitches, it is for the first time I tried to shoot videos. I promise to learn this and present to you better videos next time.)

He emphasised on the role of a Guru and how his Guru changed his life and showed him direction. As a Baul, he has seen his world change. Now he performs in different occasions, events as prestigious as the CommonWealth games and in numerous countries like Russia for an example. It was the same him, who had to sing to beg on the streets to make ends meet. Life for him has come a full circle. He is now the president of his association and his music wins heart.

This time, the topic of discussion had shifted from Baul philosophy to region, events and regional politics. He is a survivor and a witness to the cruelty of the religious puritans in the late nineties. The Bauls and the Fakirs were targeted, humiliated and often beaten for not believing in either Hinduism or in Islam.

The talks inadvertently shifted to the left rule and the present state government. Baban Das Baul is very optimistic with this present government. He now has his identity card and his medical bills are taken care of by the government. The government is being proactive in showcasing the rural and the folk culture of Bengal. Young people are taking interest in Baul music, one being definitely me, and he hopes the career of the Baul is no more as threatened as was in the last regime.

“You can have the Islam fascism, Christian rulers or the Hindu dictatorship. But above all religions, is the religion of Humanity. The Baul philosophy will continue for centuries to come, in different forms, ideas, shapes and in different packaging.”

I’ll end this post with a song composed by Baban Das Baul.

Do let me know if you have liked this post. This is for the first time, I have embedded a video and a sound clip to my blog post. Your feedback is very necessary for me to do the part 3 of this series. Thank you, thank you so much for having read this.