One of the chief attractions in Murshidabad is the Hazarduari complex. I would not write about the history of the Hazarduari palace as my knowledge is particularly limited to the Wikipedia page.

The Hazarduari palace was built by Mir Jafar’s family while Shiraj Ou’Dullas palace was on the other side of the river, now raised to the ground.  The Hazar Duwari complex has – Nizamat Imambara, Clock, Madina mosque.

Loosely speaking, Imambara’s are places of worship for the Shia muslims. Nizamat Imambara is the biggest Imambara in the country, the foundation stone laid by the last Nawab of Bengal. That’s Shiraj Ou’Dullah.

The Madina mosque has the soil of the Haz – Extremely sacred to the Muslims, brought by Siraj Ou’Dulla’s mother after he became the nawab of Bengal. Phew, enough of history for now.

The clouds brought life to the landscape and with the sun playing hide-n-seek, I had some lovely time. I did not photograph all of it, I was there seated on the ground relax watching the cloud move. Ohkay, I am no more going to romanticism and literature.

Ladies and Gentlemen, Nizamat Imambara for you, freshly served with the clouds. To the right you see the clock and to the left – the Madina mosque.

The HazaarDuwari building, finished in 1837 has 100 real doors and 900 false doors. The false doors had a purpose. The lowest floor of the palace was a court. Anyone failing to pay taxes was tortured there. If he could manage to escape, he found it tough finding the right door through which he could escape. Inhumanly intelligent, isn’t it?

I am sure, most of my audience hated the subject of history in their childhood. Revision time !

The British East India company was formed in 1600, came to India as traders and settled in three principal areas ( Presidencies) that were named – Bombay (Mumbai), Madras (Chennai) and the most important – Calcutta (Kolkata). Ports were bettered for a better trade. Calcutta – USA business flourished even before the British started officially ruling India. They were building a fort, Fort William. This was not appreciated by the then Nawab of Bengal, who made this one of the few reasons to attack Calcutta fort. 1756 – The Nawab with all his might, won the battle. But the British were smarter people then. They made Mir Jafar (Nawab’s trusted) betray the Nawab of Bengal. 1757, June 23rd – The second battle of Plassey, the British and the Nawab locked horns and by treachery – the British won. Thus begun the British Raj in India and Calcutta became the capital of British India and the seat of proper English.

Slightly more than 230 years, this very day – I was born. ( Else how do you think I remember?)

But did you know – The Grand Post Office (GPO) of Calcutta is one of the building which stands today on the place which was the old Fort Williams?

Let’s get back.There are other structures, the graveyard and different other mosques, Jagat Seth’s home and the museum which you can look forward to. 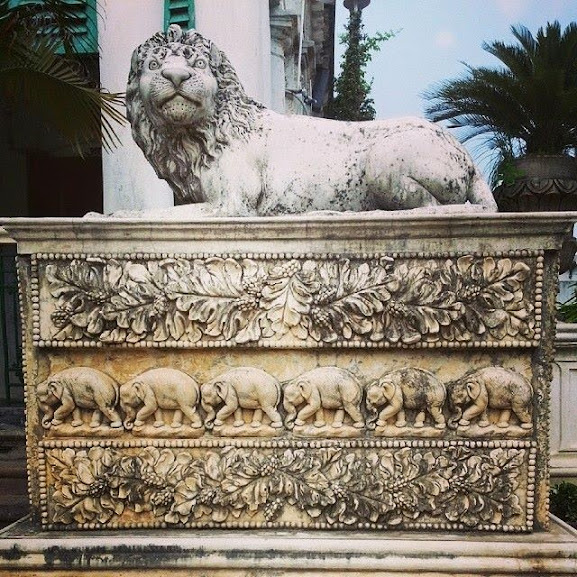 The Kathgola palace and the Jain temple : The Katha Gola opalace was actually called – Jaath Golap (A variety of Rose). However with the decaying rose plants, people tucked the “P” of it and it’s now Kaath Gola Palace. Magnificent structure with lions everywhere. Very very impressive I must say. The present owners of the entire place is in Bhawanipur, Kolkata.

The reasons why I went to Murshidabad are two – One, there were clouds and I wanted to photograph these structures with a dramatic sky. The second is to search for Bauls. The search for the Bauls shall continue and any time soon, I might be there to find more about the Sufi-Bauls.

This blog post is extremely light hearted. I believe not many will even read through the entire article if it feels like a history book!

Till then, let me know what you want me to write about. Give me an honest comment. Thank you.