The word “Holi” creates vivid imagery in our minds. Especially if you are a Bengali who has grown up listening to either Ranga Hashi Rashi Rashi, Oshoke Polashe, Ranga nesha… or Khelbo Holi Rong Debo na, Tai kokhono hoye? And must have once definitely giggled while playing Holi with a select few friends or perhaps a cousin when they come home with Abir. I got introduced to “Holi Khele Raghuveera Awadh mein” or perhaps “Rang barse bheege chunarwali” or “Do me a favour, let’s play Holi!” during my later teenage. You could blame it either on the lack of a cable connection or perhaps the strict regulations at home that did not allow me to watch TV much.

The celebrations portrayed there were very different from the ones I thought exists. The soft, shy dance steps of the kids singing to “Rangiye diye jao, jao, jao go ebar jabar age” made way to the tempestuous dance moves of Ashkay Kumar; private family gatherings or the celebrations of school kids that I believed happened during Holi started getting replaced by Amitabh Bachchan’s warm hugs with various colours flying in from different sides of the screen. That was followed by another set of virulent dance steps, the moment Hema Malini appeared onscreen. My imaginations got a different boost when I saw contemporary photographers exploring everything and showed more than what Bollywood portrayed; Holi be like: vibrant colours, celebrations, party and a fun time together. I’m sure that if you have a DSLR, for once you have definitely thought of going to Vrindavan during Holi. 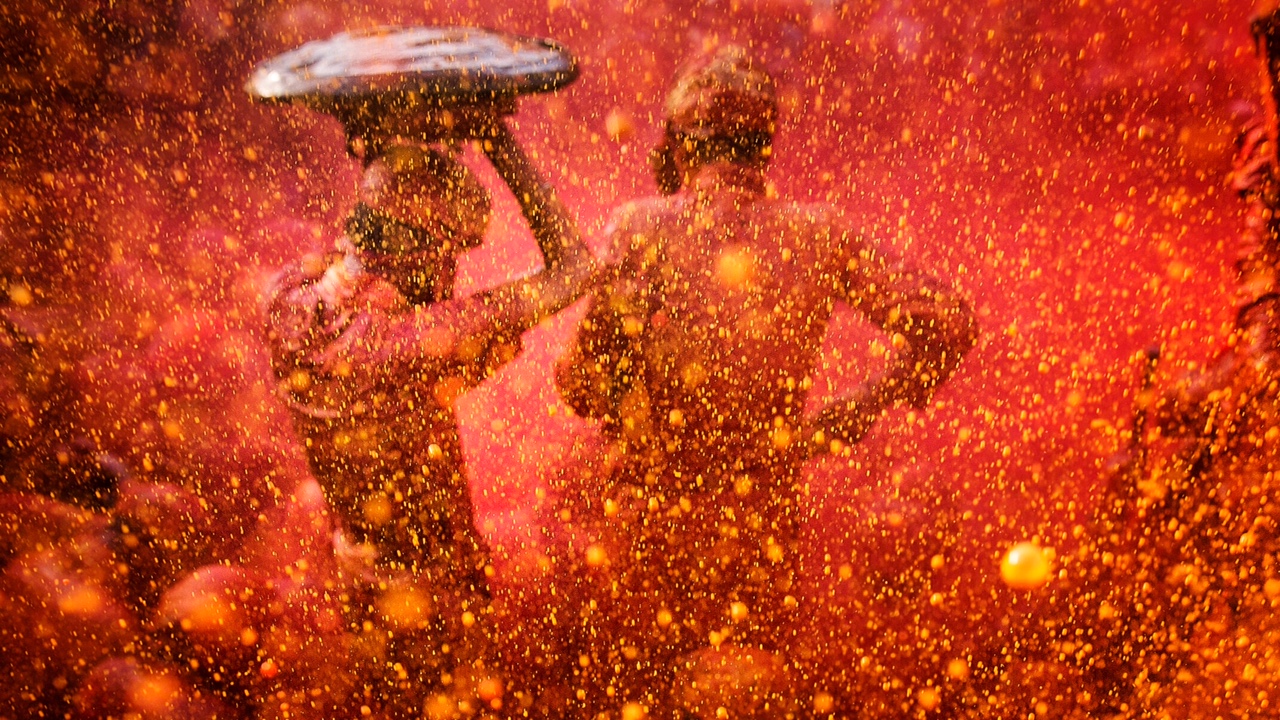 Vrindavan is perhaps all of that; good food, a lot of people and a lot of colours. As you walk through the narrow lanes of Vrindavan or Nandgaon, there would be sweet shops on both sides of the lane, infested with young adults ready with dry colours or perhaps the huge water guns pointed at you. You’d walk showing them your camera because anyway their excitement reaches the levels of deafness. 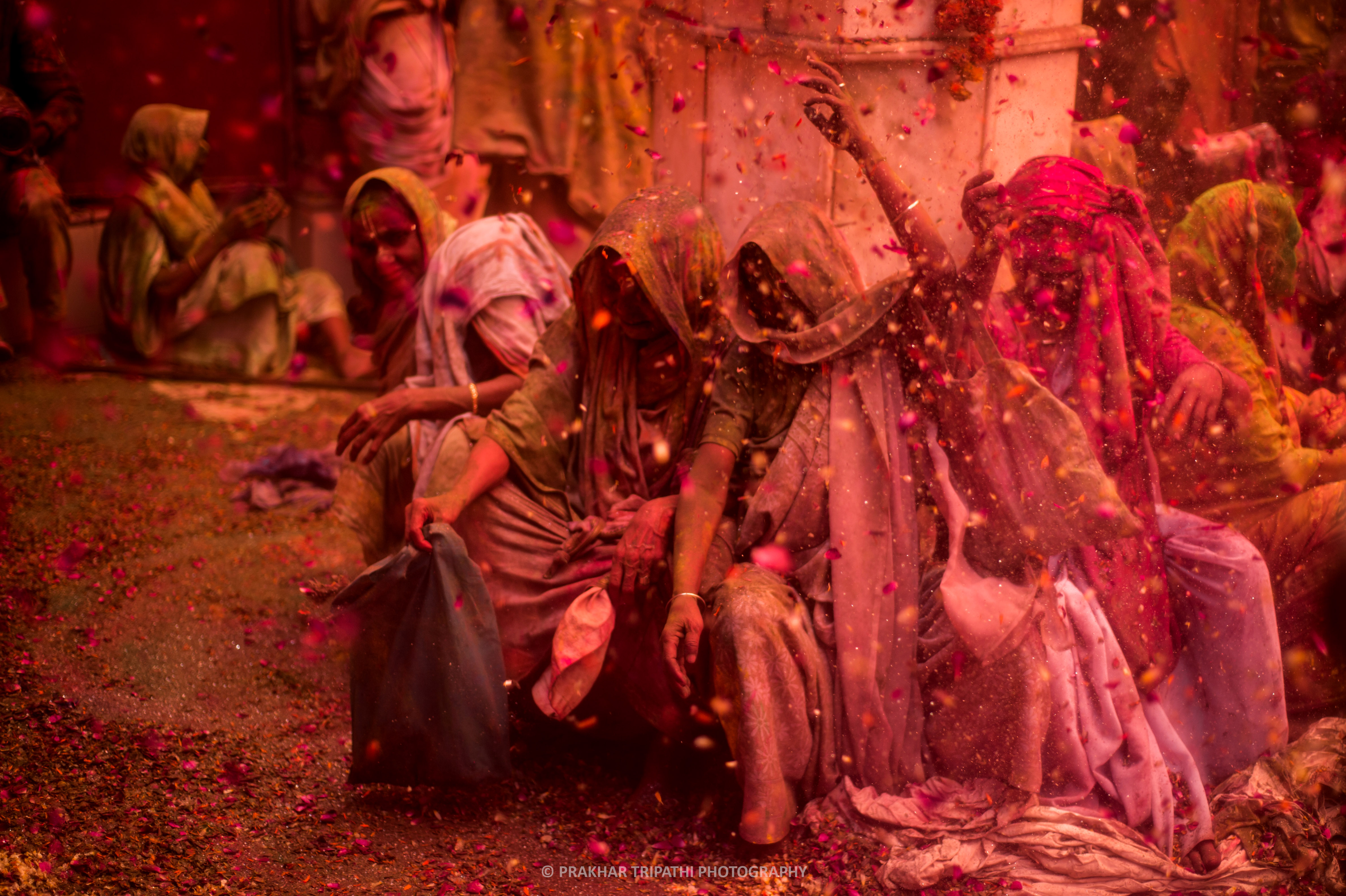 Every person in Mathura celebrates Holi in the most elaborate manner possible with dry colours, water guns of various shapes and sizes. Holi in Vrindavan could be broken down to Lathmar Holi, Phoolon ki Holi and the final celebration that takes place at the Banke Bihari Temple.

The previous year, widows played Holi inside a temple complex breaking a tradition of social discrimination. Over a thousand kilos of colours were used in the celebration and yours truly had a tough time breathing. Arghyadeep, my friend, however, had his shot. 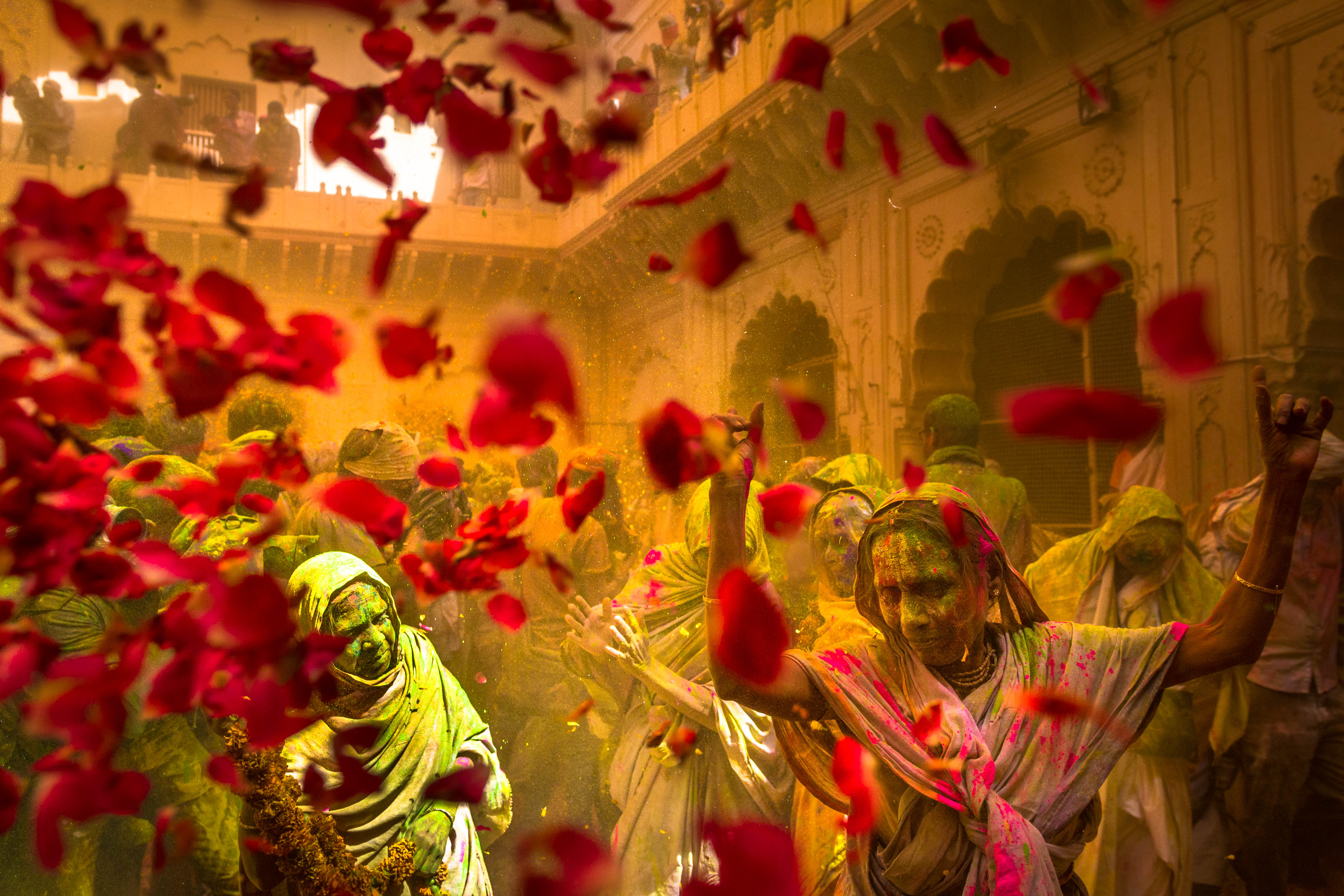 Everyone chants “Radhe Radhe” and if you are a girl there, they’d make sure you are wet from head to toe, drenched in colours. In my previous blog post about Vrindavan, I had expressed my concerns about a few things which include the way Holi becomes an opportunity to grope women, stage photographs asking widows to dance and repeat dance steps or perhaps how the crowd is mismanaged in the Banke Bihari Temple. 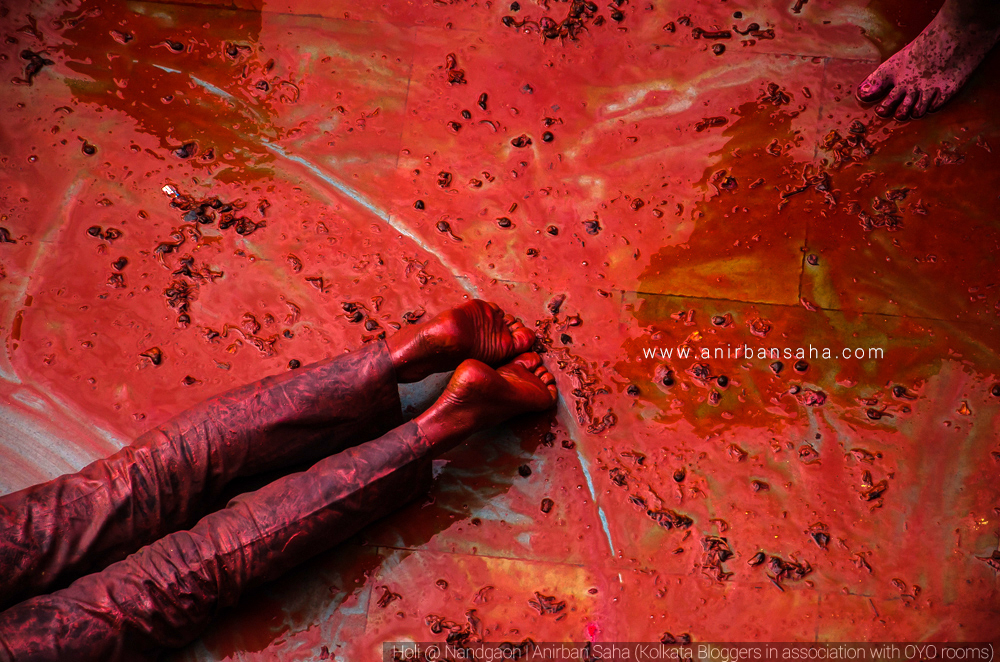 Getting back to Bengal, the Bengali culture has evolved to become slightly less violent that what I believe I saw in Mathura. I haven’t been to Nadia during Dol Utsav but I firmly believe it wouldn’t be anywhere close to the rush in Banke Bihari. Honestly speaking, as a Bengali who has grown up in Calcutta, Banke Bihari during Holi attracts a lesser crowd than Deshopriya Park during Moha Oshtomi. In this land of the Maha-Kumbh, if the police and the temple authority wants some discipline, it wouldn’t be very tough. The rush and the indiscipline aside, I wanted to go back to Vrindavan the second time this year. Saimantick wanted to go and soon OYO rooms and Tamron agreed to collaborate.

Having OYO Rooms as partner ensured that we get a budget quality room. This was my first experience with OYO Rooms but my second in Mathura; so I just did not want to take any chance, especially because this was Saimantick’s first travel without his family. I’m sure, if you are reading this, you would also be sceptical about security and comfort if you go to a new place with your sibling. When I say comfort, I do not only mean the cleanliness. The hotel we were given, had rooms which are comfortably big and very clean and with a spacious bathroom. The behaviour of the attendees was up to the mark and to my relief, they understood English. I wanted to ensure that everything goes right with the accommodation, thus OYO. Tamron Kolkata is more than a partner; For the manager, Dipankar da, it is more of the relation that we’ve built over the years. They’ve always been cordial and helpful. 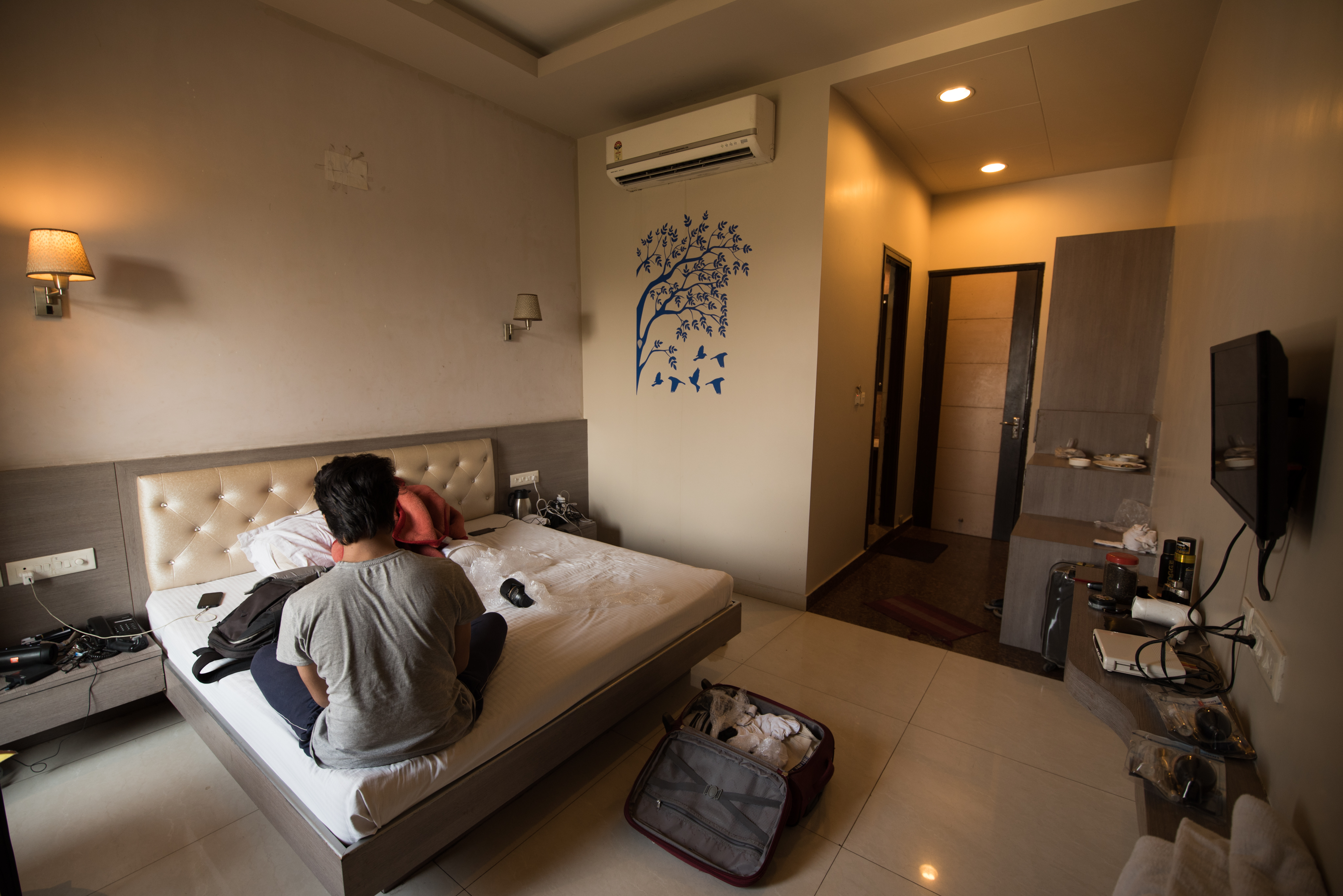 Coming back to the Holi celebrations, Bengal has its own ways of celebrating it. One is the “Dol Jatra” and the other is “Boshonto Utshob”. Boshonto Utshob is Tagore’s way of welcoming the Spring. Originated in Shantiniketan, this is followed in Rabindrabharati University Kolkata and various smaller localities in the city.

Dol Jatra is celebrated as Sri Sri Chaitanya Mahaprabhu’s birth anniversary which coincides on the same time. I’m told that the Dol Jatra celebrations in Mayapur, is pristine. In Ramakrishna Mission Belur Math, on this day they worship Chaitanya Mahaprabhu and then take a procession out singing Kirtans visiting different temples in the Math campus and playing with coloured powder. I’ll end this blog post with a couple of photographs taken there. 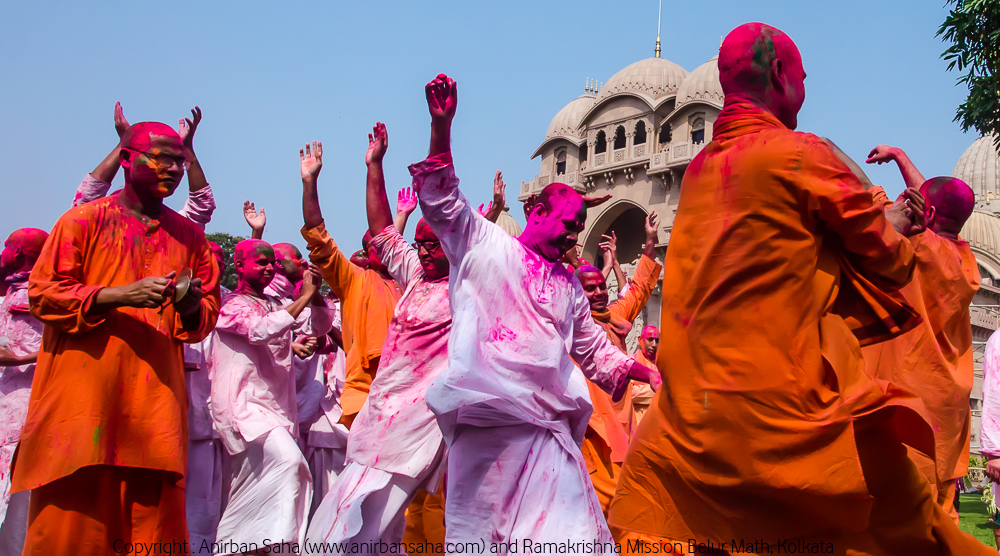 Monks of the Ramakrishna Mission during procession | Anirban Saha 2017 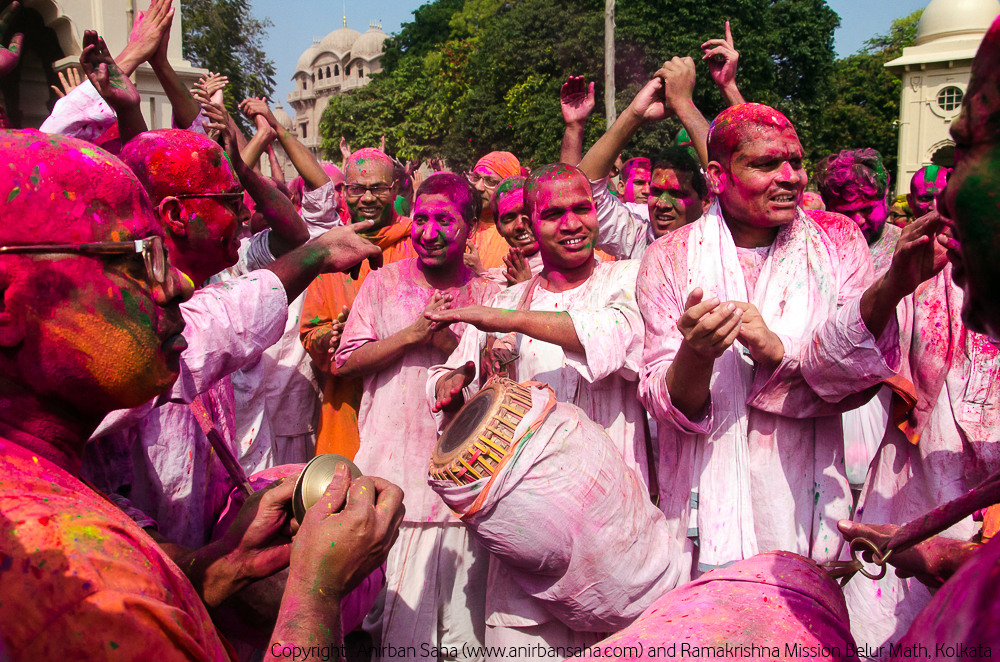 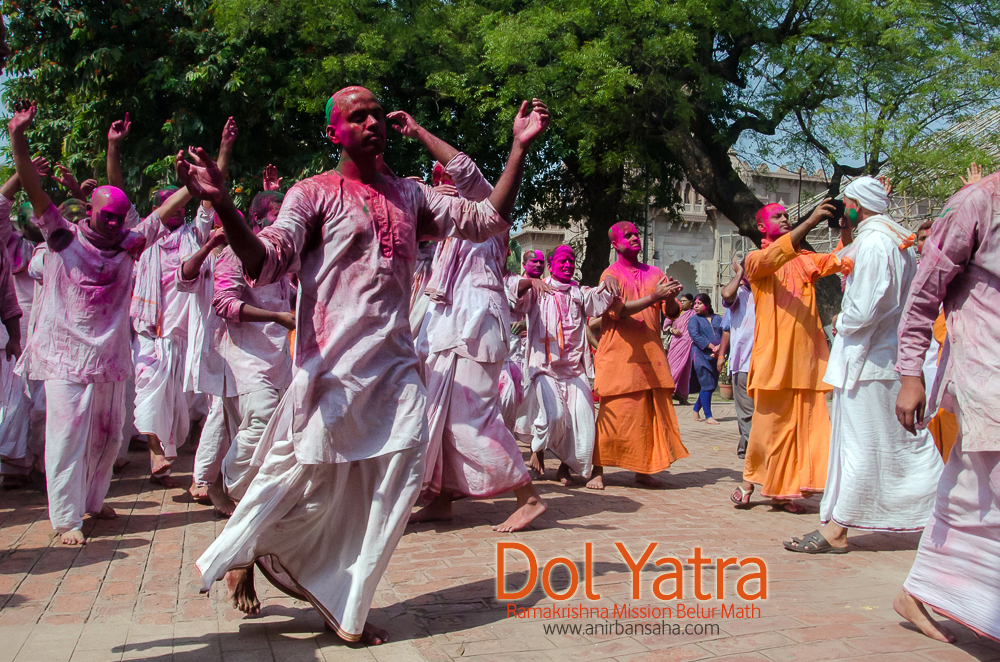