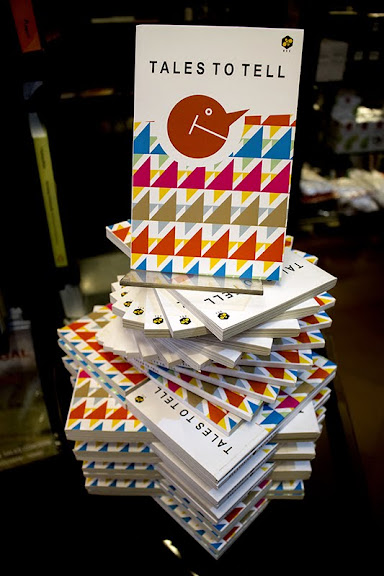 Tales to Tell – the book.

What is “Tales to tell”?

It is a anthology published, featuring twenty new authors and twenty new artists by Kolkata Bloggers and BEE Books. A competition was conducted from January 2015 till May where aspiring authors were asked to send us a short story written by them which is less than five hundred words. The best twenty of them got compiled into a book – Tales to tell, launched in Oxford Bookstore last September 6, 2015.

How did the idea come up? How unique is it?

I have a friend, Esha who has her own publishing startup. We were discussing how she continues to live in the stone age while I’m modern and completely online. We discussed how in a city like that of Calcutta, people are still comfortable offline, writing, painting and performing theaters. Not that the city lacks resources to be very visible online. It’s just a mindset of people. Why not bridge the gap? Thus, Tales to Tell. 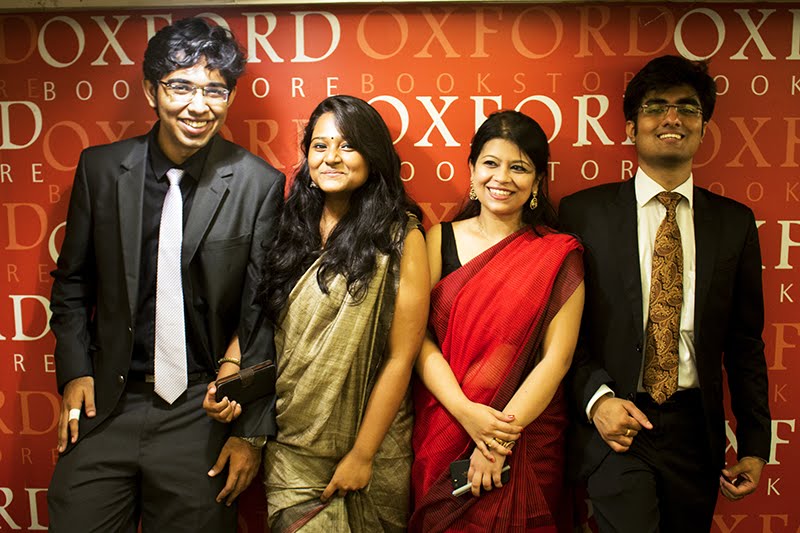 Arjyak, Asmita, Esha and me. I love flaunting this tie of mine!

It finally became a collaboration between “Kolkata Bloggers” and “BEE Books”. From BEE Books’ side, Esha used to coordinate and from Kolkata Bloggers’, Asmita did initially. Towards the end, Arjyak and I took active part in it. It was so thrilling!

Was it Calcutta specific?

Although an initiative of “Kolkata Bloggers”, which has the name “Kolkata” in it, the initiative has spread to a nationwide audience and has been very appreciated as well. Of the twenty selected, we have Sagher Manchanda from Pune, Simran Kaur from Gorakhpur. They do not have any connection with this city of joy. Others include Ishan, Purba who had migrated to Mumbai, Devpriya from Ahmedabad, Anish from Tamil Nadu, Debolina Coomar who is now Bangalore based.

What exactly did we do?

We declared open a competition during Apeejay Kolkata Literary Festival 2015, at Oxford Bookstore “The Great Indian Bloggers meet”, organized by The Times of India. The writers could have been of any age group but should they write, they should write in English language and within 500 words. We looked forward to thought processes, impact, uniqueness and correct grammar.

The competition ended in May. During June and July, the entries were sorted and shortlisted. Finally, twenty stories were selected. However I felt, it looked very dull. So even without asking the publisher, I thought of connecting to the incredibly young talented artists in the city. For 20 illustrations, we connected to almost 40 young artists from Calcutta. Within a couple of weeks, the illustrations were ready, book layout and cover design done and it was ready to be proofread.

How was the experience?

It was as exciting as my college magazine till the point in time, it was launched. Well, yes. I’ve always been wearing the manager’s hat, connecting, collaborating and working with people. During college life, I was in the editorial board of the college’s magazine as the “Chief Coordinator”. “Tales to tell” was not much different. We had to reach out to people, ask them to write, collect them, edit them, get the book/page layout made and then proofread. During college days, I had to spend a good amount of time inside the printing press checking every single detail. This time, we had Esha and her team to do it!

But the Tales to tell launch was exciting, something we really could not anticipate. During the entire process, we had our share of fun. Asmita and Esha used to discuss the short stories, share smiles and giggles. I have never been much of an offline reader. Their jokes went over my head.

A lot of people helped us during this phase. Roudra Mitra designed our logo. Not only has he designed the “Tales to tell” logo, he made the “Kolkata Bloggers” logo as well. He was instrumental in spreading the word across to the artist community in this city. Then we had Tanumay Naskar and Rimbik Das, who helped a lot.

After the results, it was more fun for me! Although a huge cross section of the society took part in this, all the authors selected to be printed are young (considering me young). Then we discovered that most of the illustrators were from St. Xavier’s College, which includes a twin and a triplet. There was this specific lady, who had very mysteriously  disappeared. After a lot of man-hunting, we found out that she studies in Presidency now. She does not have any online presence so far!

First of all, it felt incredible holding the book. Whenever something new is created, it is a inexplicable good feeling. The book is very nicely designed and packed. Kudos to BEE Books and Esha.

Discussion: Apart from being a brilliant actor, Mr. Barun Chanda is an author who writes fiction with his younger self as the protagonist. Nirbed Roy, being the member of legislative assembly representing the ruling party governing Bengal today spoke about his experience with writing, illustrations, cartoons and invoked the incredible history of cartoons in Bengal. Ms. Bhagat has seen the world transform from the book-loving audience to the e-book loving newer generation. Mr. Bhattacharyya’s game making startup has made it’s presence felt in more than 10 countries. He gave us an insight how short stories, character-building, sketching, illustrations are relevant today beyond books, in the exciting world of comics and gaming. Aninda Das mentors many youngsters and startups in Calcutta. Former coordinator of NASSCOM, he considers himself a social enabler. He spoke about how books are important and relevant today in the corporate world, various statistics explaining how big the publishing world is. 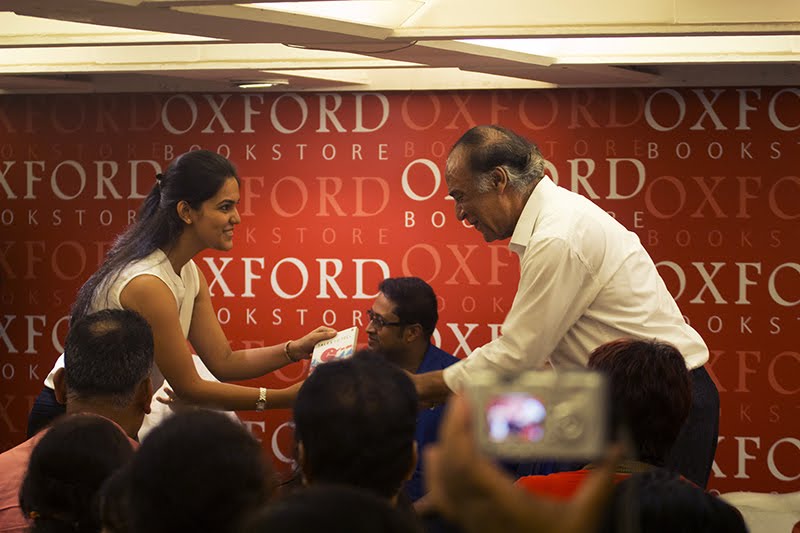 The published authors and illustrators were given their copy of the book by the guests.

Thrill: It was thrilling to see so many people smiling and happy. It was more than a Durga Puja of sorts. 32 young people together with their friends, family, teachers.. parents of those authors who could not make it. Other guests, media and well-wishers who turned up. Near 160 people were made to fit into the first floor of Oxford Bookstore. A total of 220 turned up, the latter ones were refused entries.

Pre-launch booking and the craze! Prior to the launch, the book was made available on Flipkart. The very first day, it was sold out. After stocks were refilled again, it exhausted within minutes. During the launch, all the books were sold out.

How was the feedback?

The feedback has been encouraging so far. People I’ve interacted with have given a very positive feedback of the same. A few proofreading errors were pointed out. A few categorically mentioned that the illustrations were excellent! Mr. Bhattacharyya was excited enough to tell me that he loved Sagher Manchhanda’s story the most.

Once you finish reading the book; you’d be left wondering about each of the short stories and look again into each of the illustrations…because suddenly you can see the details you’d missed out before reading the story.

I was never so impressed like I was yesterday at Tales-To-Tell launch at Oxford Book Store. When people talk bad about the youth of Bengal because of some of the recent incidents, I saw yesterday a section of youth who are positive, energetic and they are the real torch bearers of #Brand Bengal.

The stories are chosen wisely, and each short story has a different quality to it. The makers of the book have successfully captured different styles of writing while shortlisting the stories. There are even some stories which I had to read twice to understand the context and the depth to which it had been written. 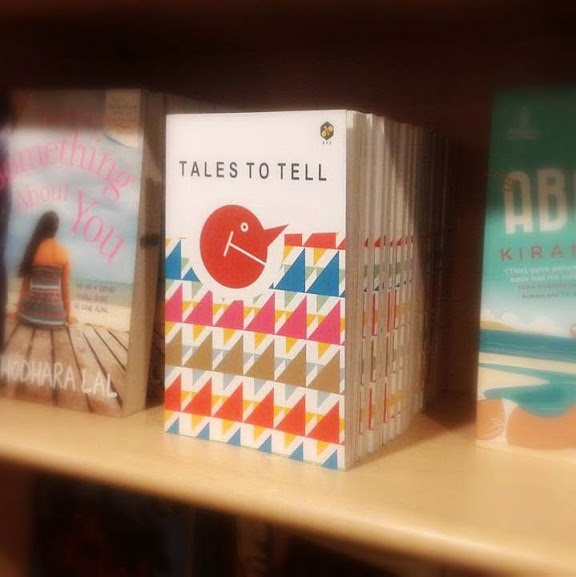 The book is available in all leading stores and Flipkart.

Where would one get the book?

If you still have not got a copy of the book, check the book out on Flipkart! Click on this link to go to Flipkart.

You would also find the book in Oxford Bookstore, Crosswords, Story and Starmark.

While this edition had no theme, the next edition of this book will have the theme “Romance” and we are looking for varied versions and perceptions of Romance. Unlike the previous time, this time the short stories would have a word limit of 1200 words. We are looking forward to creativity, impact, and different varied perceptions. If you have a story to share, please drop an email to [email protected], with your name and contact details.

A very special thank you to Souranil for having photographed the event so beautifully. I still have no clue how you managed to pull this off, managing the crowd and in all the rush of the event. Kudos! 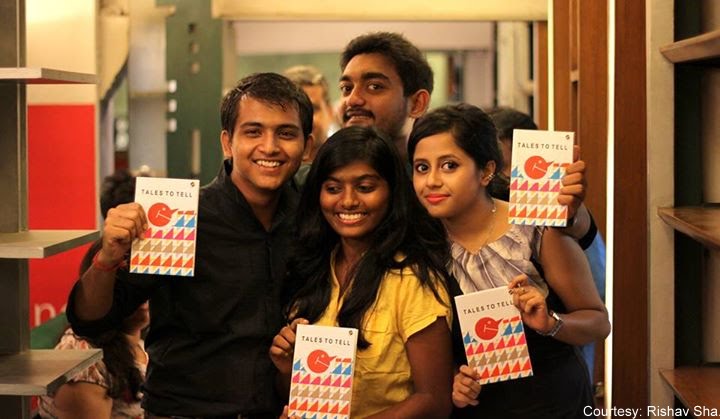 A part of the St. Xavier’s College gang!