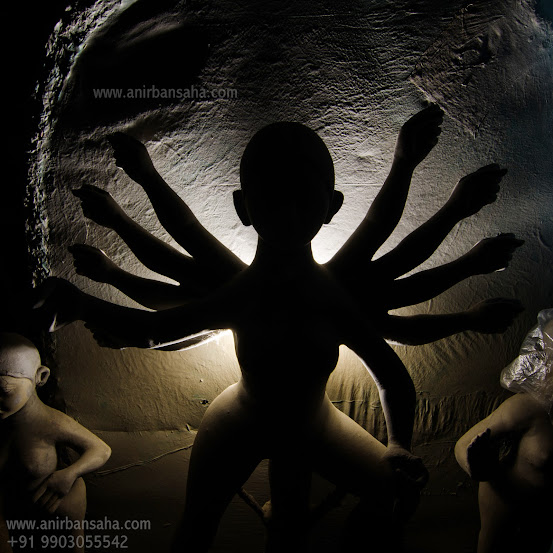 Undeniably an indelible proof of Man’s interminable connection with the cycle of seasons, it is that time in the journey of the earth around the sun, when true-blue skies and annoying spells of unpredictable showers, bring on that familiar feel to every Calcuttan worth his identity. Back in the countryside, the kaash flowers with their signature white head dresses and fields of sunripe harvest-ready grain have already sent out invitations to the mighty Lady well on her way here. The Goddess will once more descend onto this city, with her multi-talented offsprings in tow, transforming an indolent, laid back sleepy megapolis into a mass of energy. But for now, She is waiting for her moment, allowing humble mortal hands in incandescent lit hovels in the narrow alleys Kumartuli to mould Her into existence.

She is an amazing woman- the Goddess “Mrinmoyee”- one composed of mud. Created for practical purposes, to aid the Gods, the Goddess shares similarities with the city she calls home for five hectic days. Calcutta too, was born out of need and necessity. Her prominence grew out of her requirement to replicate the power and might of a masculine empire that controlled most part of the discovered world. The Goddess was born when the Gods needed her and furnished her with the power and grandeur they themselves possessed. So when each God gave her his weapon of choice, he gave a part of himself to her. Calcutta was bestowed her grandeur brick by brick by her rulers- indigenous and colonial. Her monuments and landmarks, (as she rose to become the capital of the formidable empire in the sub-continent), are evidence of the splendour her rulers invested in her to reflect their glory.

Much like the Mother herself, Calcutta is mother to the lesser and the least. Her highrises cohabit with her slums- her gods with her mortals, her good with her evil. She is the silent witness to the sea of humanity that flock to her shores day after day. She is benevolent and malevolent at the same time. In her we exist.   Today, as the harmony of the agomonee or the welcome song for the Goddess is played out in every heartbeat, I can’t help but loving my Calcutta more. She is mother, lover and protector to us all- She is truth and beauty and she is the unassuming Goddess- who doesn’t wait for an invitation, a season or a reason to arrive. She enters your heart and fills you up with all of herself, and smiles when you feel distraught at the thought of going away from her. This is the “taan” or “attachment” you feel and that melody in your spirit? Well, it is Calcutta’s agomonee playing out in you Come home to Calcutta- welcome the Goddesses home!

Post written by : Preeti Roychoudhury. Professionally a teacher in Loreto House, she is one of the most dynamic and honest persons I’ve come across in recent past. An able blogger, motivator that she is, she describes herself as Educator, writer, thinker, dreamer, mind traveller, a moderate feminist, a staunch humanist, eternal learner.