Gone are the days when theatre meant spending leisure time with families and restricted to a chosen few theatre halls. The Kolkata youth has taken it upon themselves to break the stereotypical mindset and take theatre beyond the established convention! Upasana Dasgupta (student, Amity Mumbai) tells you more about Kolkatas youth theatre today:

The term “theatre” has changed it’s colour over the years in the city of joy, Kolkata. Killing the stereotypes and the barriers the art has shown it’s reformation and restoration in the past few years.
Kolkata being the richest cultural hub of the country, has seen the passion for theatre running down from the youth blood introducing the concept of Youth theatre. The journey from the beginner urge from campus life to seeing it as a profession is an absolute tale of inspiration.
The trend being brought down from the year spaces of 2008 till the present years the revolution has been massive and diverse. The change for shifting their passion for being an artist on stage leaving the priority of glamour in mainstream was an illusion for people.
Similar cluster of youth starting their hub naming it “The Hypokrites” were among the first youth theatre groups starting in the city. Their purpose of the title being ironic is originally named after the Greek phrase of actors. From participation in the college festivals in and outside the city, their first foot to professionalism was after being the declared winner of the National theatre festival “Abhinaya” in Bengaluru. In the progressing years their productions like “Happily Unmarried” and “Conditions Apply” have left an indelible mark on the audience of the city.
Theatre in the broader concept has also fit in several changes than it’s sticking definition. The major shift in the Language barriers have marginalized . These organizations have reached their ideas to multilingual and colloquial productions. 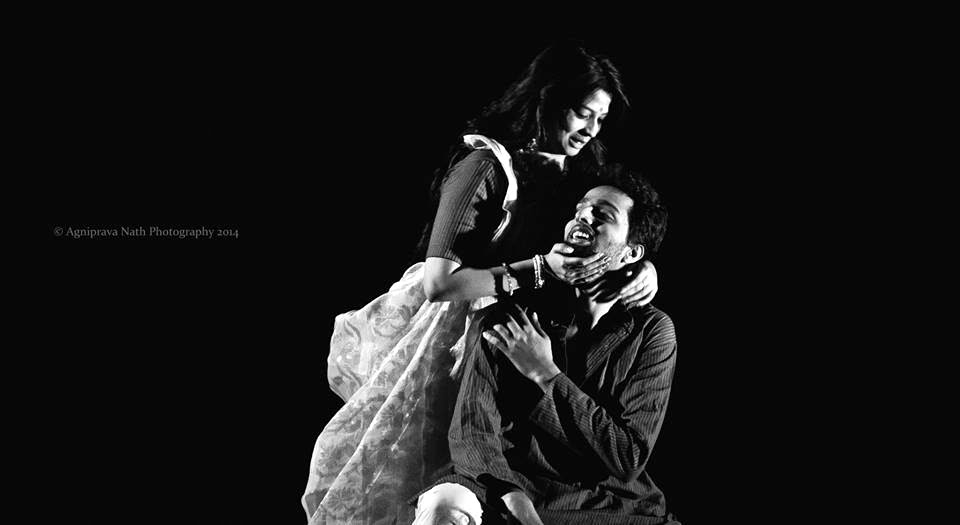 A still from MAD’s production, shot by Agniprava Nath.

Four friends being pass out students of Don Bosco Park Circus dedicatedly wanted to pursue their innate passion for theatre as their only profession in their college days . Their strong urge, dedication and quality led them to be the most profound and heard name amongst the youth in Kolkata. “Mad About Drama” being one of the finest youth theatre organizations had started their journey in the year 2011 with innumerable struggles and challenges ahead, they step onto their first step of exposure standing as the runner up of Channel V India fest. With every production they had handled bold and new topics aiming at keeping theatre as a sustainable art form in the country. “With Love Calcutta” became the most stirring play among the audience that revived each one’s sentiments for the city. The appreciation reached to the extent where these young Thespians reached Prithvi theatre Mumbai in presence of the greater theatre personalities to perform the same.
By exceeding boundaries and the initiative to shift from any restricted definition of on-stage drama, the team of Mad about Drama experimented in the merge of Bollywood and drama with their phenomenal production “CODENAME: SRK” which changed and inspired several audience in and around the city. These production when carried out in the prestigious stage spaces in the capital were given appropriate appreciation and recognition.

Shifting back to the culture of theatre in the city, the beautification of street plays and their rich ambience has always been the prior concept theatre in one’s mind. This group of college friends who pursued theatre as their Alma matter named it “The Shriek of Silence” and began their venture in the year of 2012 . Starting with their plays in several colleges they became a remarkable spot on for Street plays. Their recognition placed after the “Vagina Monologues” that challenged social insecurities inspiring the young minds to step in for a change. Also their unique venture of organizing the Kolkata Youth Theatre Festival every year promotes the value of art and theatre in a form of grand celebration amongst the people sharing the culture.
Theatre was never a trend, neither does it have restrictions to only actors. A successful production keeps the value to it’s adjective only when it completes the beauty in all. And excluding actors directors and writers, the set and the lights of the production can switch it ton it’s best. This group of young Thespians are quantitatively fewer in number who started their organization naming it “The 4th bell theatre“. They showcase their art in form of workshops, plays and events also keeping a unique angle of the purpose of education. They excel in the little details of graphics, sets and lights to the corner of perfectionism .Their well known production Fan craved their existence in the crowd for long.

The extreme shift of the culture has brought in a beautiful spree of enthusiasm amongst the youth inspiring them to give their talent a recognition. Struggles and hardships are never less in it. From taking the risk of following your passion, leaving the stack of notes behind and having the ability to stick around to it in the even crueller world is worth commencement. Criticism and obstacles from the society have been a boon in disguise for all these passionate youth who struggled to prove themselves resulting in self enrichment and quality.
It is an absolute treat to watch the segregated word theatre breaking all boundaries and having an impactful medium for change and enrichment in the each passing day.
Gone are the days ,when the shabby kurta and and the extended cotton bag would be the uniform for an art. Today from intellectuals till the Gigolo and from Shahrukh khan to the struggling actor. Theatre incorporated all in it .

Not just them, Kolkata is buzzing with the younger theatre groups coming up from various colleges like “Talk of the Town“, “Kolkata Romroma“, “Bodnam“, “Be-akkel” to name a few. Young school students also contribute to this thriving theatre ecosystem. Two of the newly formed school student run groups are “Drama Sutra” and “The Third Mask“.

[Promotional] “The Third Mask” is a theatre group formed by school students of Don Bosco Park Circus, Modern High School, South City International School and many others. Their first production “C.H.U.P.” was well received by this city. Their second show of their first production is coming up this 15 October, at Gyan Manch. 6 PM. Support them by being there and helping them with your ideas.

Post written by Upasana Dasgupta. She worked with Mad about Drama (MAD) since it’s inception till the point in time she had to move to Amity, Mumbai to pursue her Bachelors. She is one of the extreme hard working individuals that I have met. Sincere to her words, she knows how to balance work, personal life and academics with ease.