Bangkok, a city slightly more than high-rises, busy corporate life, go-go bars and active night life has been my home for the last one week. It would be unfair to the city and it’s people if I don’t acknowledge the beautiful skyline, the culture , the food and of course the super fast life that mesmerised me in the few days that I’ve been here.

If you are an Indian planning to come to Bangkok (“Bahng Gawk”, as the locals call it) either to travel or to set up your business, things will be just fine. There are a lot of people from different parts of the world settling here. But there is too much of India in it. From the Sanskrit sounding airport name “Suvarnabhumi Airport”, to the Ganesha temple near my place or the wide range of food it has to offer.

Let me share my experience in the last 6 days. To start with, getting the visa on arrival was very easy and hassle free.

Bangkok, through an average Indian’s eye.

The river and the sky line | Bangkok ‘ www.anirbansaha.com

The first time I tried exploring Bangkok, I felt it was an extension of some part of North East India. That feeling was comforting. Like in India we have different parts of the nation speaking different languages, people in this part of the world speak a language I do not understand. But they smile and give me enough time to break my sentence into simpler English words and use gestures to explain to them what I want. They are patient and helpful.

One of the first people I met here – Nut Xzer, is almost of my age. He got me introduced to his group of photographers here. That really did give me a head start to my stay in Bangkok. Another very young boy, aged 17 – Mark helped me with the directions, spoke to me in proper English, dropped me at the gate where I was supposed to go although he had to go to the exactly opposite gate. Sirapop,a veterinary medical student, told me how to go to the ocean world, in objective details! Kudos. They are just three examples of how amazing young people here are.

One of the first things that caught my eyes as I entered the locality is the huge Ganesha temple. This is not an Indian locality and later on inquiry, I came to know that Thai people too worship Ganesha as the God of wealth. I am yet to do my research on this. If you are interested, you could possibly read this.

Like in Delhi or Calcutta, we have the metro rails running within the city, making this a smaller place to live in, definitely faster than the Calcutta one, air conditioned and more frequent. The metro services are broken down to two major parts – the underground one (MRT) and the sky trains (BTS). To reach your destination, you might require to change a couple to trains. Oh yes, it can teach Calcutta how to reduce suicide attempts on metro railway tracks! As a commuter, I have no access to the metro tracks. There are specific doors which correspond to the doors when the train stops. Both open at the same time for the passengers to get down and newer ones to board. Beside Suthisan is this Spencers type retail outlet that stays 24 hours open. It sells almost everything under the sun –Buckets, packaged food, beer, eggs, water. We Indians never pay for the water we drink. Here we need to buy packaged drinking water to just survive. Those who know me well, know I will spend most of the money on water.

The heat of the day is often calmed down by the air conditioned malls, offices or even taxis. However, the tuk tuks (Bangkok equivalent to Calcutta’s autos) do not have AC and quite very naturally.

From inside the tuk tuk, Bangkok | www.anirbansaha.com

A lot of friends are excited about easy sex in Bangkok. Here is my take: It is hyped. Unlike many other developed countries, prostitution is illegal here. However a major part in this city has bars and massage centres that offer you carnal pleasure. That’s no big deal. Irony is, although illegal, Calcutta too has one of the biggest and thriving red light areas in Asia. It is good that people here are open about it, elders discuss with kids about sex. Sex toys and porn CDs are sold openly. Rapes are less as well. Unlike Calcutta, no one speaks about it in hushed tones. If you are walking alone in the by lanes, a few might just ask you if you want “Boom boom” and give you directions. At first, it was intimidating, later one will get used to it. However, if you want to experience, Nana plaza is better than Patpong. There is no social stigma and people do not look down upon sex workers. Not that I noticed it. Well, something to learn!

This place in the last seven days has made me meet a lot of interesting people who were tourists.  David is a German student doing his masters in Biotechnology. Very well behaved and not high on hormones, decent and a person I loved talking with. Very recently, I met another lady – Aparna Athreya, who used to work in a multinational company. Now she has left it to have her own company of story telling and performing arts in Bangalore. I had the opportunity to talk to a few tourists as well. One of them, Imran, is a businessman from London. He guided me with where to go next.

Wat pho – The temple of the reclining Buddha. I went there with Thailand Food Tours and it was such a sight at night.

Wat Pho: It is one of the oldest temple complexes in the country. It is also the first university and it offered courses in Thai massage, history and literature. Although this photograph was taken post mid night, it stays open till 6:30 PM and the entry is only 100 THB. It is famous for the reclining Buddha statue.

Vat Arun from a hotel terrace. 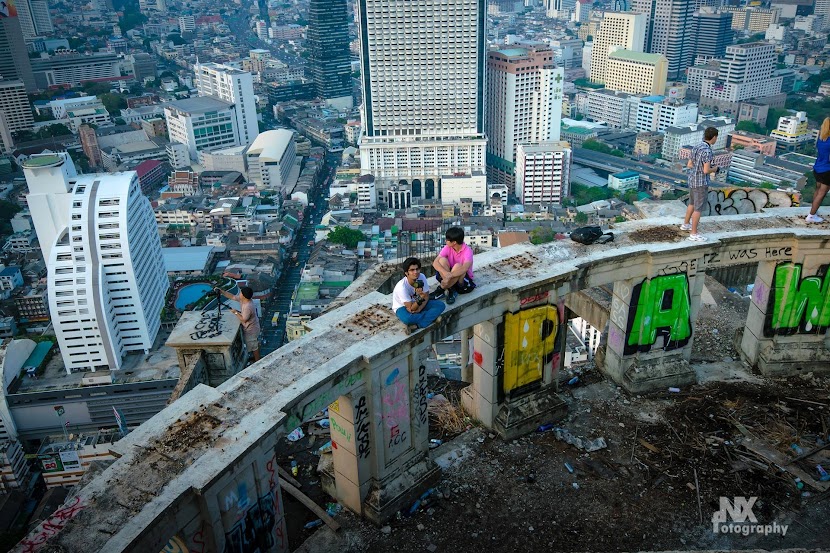 Spot me in this frame. | Photograph: Nut Xzer

Kids inside the Ocean world.

Tourist or not, if you are from India, I would recommend the SIAM Ocean World to you very much. I am not sure if such aquarium exist in India, this is an absolutely thrilling experience. Be there with family and interested crazy friends. I am sure that if my friends had been here, I would have had a crazier time.

It is at the SIAM Paragon Mall, nearest to SIAM / National Stadium metro stations. The entry is for 900THB, corresponding to Rs. 1800 and they accept Master card. I wasn’t carrying enough cash. Luckily was carrying my Indian MasterCard.

The streets are filled with food stalls of all the other things. They appeal even to a non foodie like me !! And people should try the street food in Bangkok! I do not know their names. All I know is that they come at quite a reasonable price and taste awesome! But if you do not like sea food, hate pork and can not have beef… or simply fear eating cockroaches or grasshoppers… I can show you something:

I can not make this post any longer. Let me know if you have enjoyed the photographs… and more about the food in my next blog post. Do ask me questions. But seriously speaking, if you are considering coming to Thailand for any reasons, you can seek professional help from my cousins here:

“Konrad Legal” is a legal start-up in Bangkok, specialises in setting up businesses in Thailand.