Went with my dad to Chamurchi. He went there to audit a tea state, and I thought I went there to spend some time photoshooting. Anyway, I was not let to either by my dad and his team of extremely efficient managers, who were smiling beeps or the government of Bhutan. 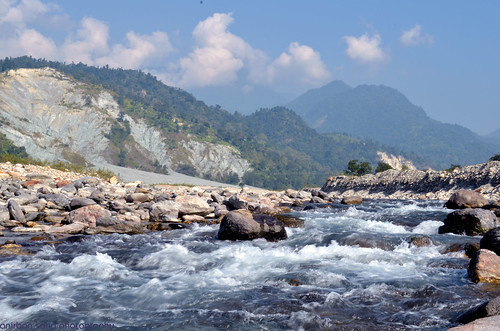 So when I need to write about Chamurchi , I dont exactly have much to speak about except for the evening discussions of the manager-auditors… which ranged from quality of leaves to cow dung.. or how happy the managers daughter is to “satisfying your ego”. Friends who followed my tweets that time, know about it in its entirity. Rest, better dont know about it.

I kept watching the workers work from my window, and had to remain happy doing so. Bhutanese children are cute… We were shown as much of Bhutan as was possible, speeding in the car, hardly stopping anywhere. Was restricted to photograph the pagoda, or even the couples wheel by rules of Bhutan. I so wish I took some portraits of the school children there.. but the car didnot stop. So the only place where no one hindered me was this river, whose name , I discovered only yesterday! …. bunk the topic of Chamurchi.

Went to Anindya’s sisters marriage. It was warm.. in all senses of the term. Jalpaiguri which was supposed to be chilling in the november winter was not at all chilling, and people greeted me warmly. Kaku-Kakima toh, was always warm.. warmer were the the in-laws of the sister. I never believed, I would be greeted so warmly, like a son of the family.. 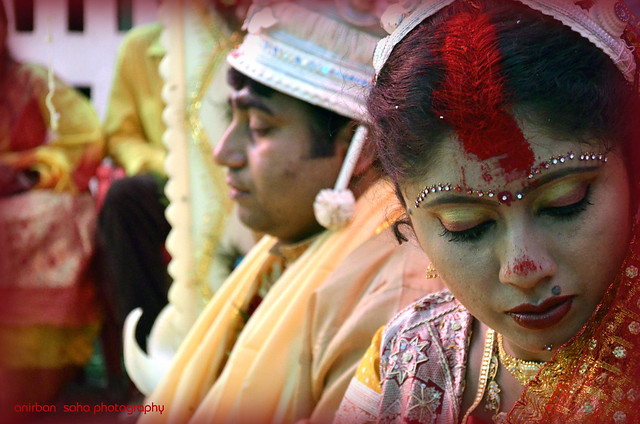 The photographer of the brides side seemed jealous of me 😛 but the one from the grooms side was extremely nice, he helped me with his experience, and also helped me predict expressions.. he was great! 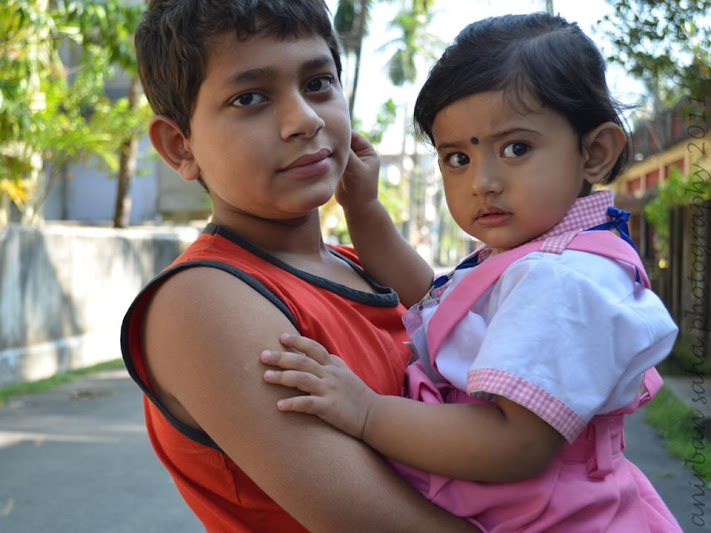 The best part of the entire trip were the kids 😀 Love them… these four days, dunno what bound us together –  the entire bachha party. In this bachha party I will also include Bubla da (Anindya’s dada) .. Perhaps the best dada. Never expected an elder brother to be this cool, he definitely sets an example for all the other elder brother to follow. The rest of the bachha party includes : Priyota… (my age) , Uma (momo) , Kutti (12 years younger to me) .. ful who is 2.5 years old… tanmay, madan, babi, kinshuk, ankur, debu and a set of different boys of different shapes and sizes. I played badmiton all the four days with them… perhaps the first time that too on streets, picking the cork up from drain, if it fell there :-/ But it was kinda fun. The kid I got most attached to is my “bhalo bachha” , Jeet. He has a horrible proper name… I better not remember it.. he gelled with me very nicely, speaking all the four days… and I kept on listening to him, buying him corks, play when he wanted me to, sit idle when he wanted me to.. and yes feed him with chips during play! 😛 He is a fantastic chap being with! Dangerously simple, kind hearted.

And I should end this post here before it gets too long! Love God, love the people around. God bless.
Photograph : Anirban Saha Photography.