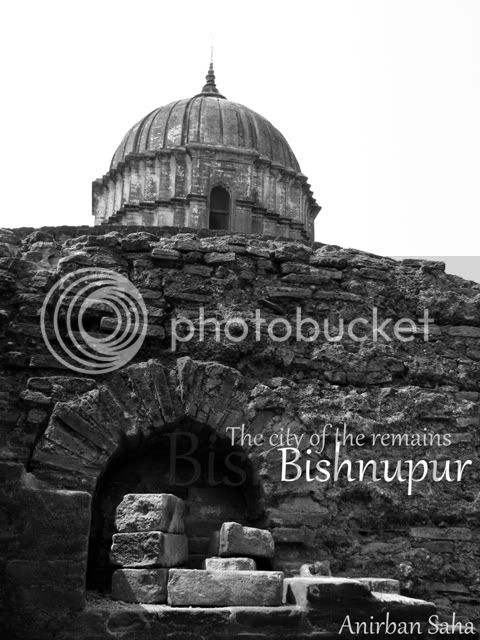 Penning down Bishnupur is just a few words, isnt just my cup of tea. More than a thousand years of heritage, lovely hospitable people; more than a hundred terracotta temples.. Bishnupur is the seat of bengali art and culture and the bishnupur gharana of Indian classical music.  Its history tracks back to more than a thousand years when the Mallas used to rule. They had developed their distinct architecture, their folklore and its depiction. It forms a distinct part of the Indian heritage.

The rickshaw -wala was our guide. With me, I had Hrishikesh…He is a fantastic person to be with and we had a nice time snapping pictures, resting, walking bare feet, climbing gates, jumping over walls, chasing monkeys… searching for food! Do check my Facebook album : 3 days out

We started the hopping with Rashamancha. It is protected by the Archeological Survey of India now.. It is elegant with 108 arches, built of bricks and was built by Bir Hambhir in the 16th Century. We went on to see the Madan mohan Temple, Garh darja, Main dorja, stone chariot, Radhe Shyam Temple.. Jor banglo and the Pancha chura temple.

By that time, the rickshawwala was frustrated, knowing that he was with two mad guys who were sitting, jumping, crawling… hopping.. anything for a photograph! 😀 We went on to see the Chinna masta temple, the durga temple (which was established in 997 AD) lal bandh, and few more temples!

The Rashamancha looks elegant at the sunset. We had the fortune to see that few days later… the Madan-Mohan temple is explicitely decorated with intricate details of anything of Indian mythology… and is Great!
Trust me… one day tour and Bishnupur is the destination you are searching for!! 😀