There was an uncomfortable silence after we finished our first round of drinks. Manish broke it with, “P, do you know my friend photographed one exciting bird today?” P is the landowner of the homestay we were in; a fine former DRDO employee, he has some knowledge of everything around him. On inquiry, I told them that I saw probably two young Paradise Flycatchers on the barren tree in his premise. I realized the photographs weren’t very impressive. It is then that I decided to search on the internet and show him how the adult male Asian Paradise Flycatcher looks. P exclaimed in his Himalayan Hindi accent, “This is beautiful!” and he continued, “a lot of them come here anyway. You can see them. We do not know the name of the birds.”

Now I have been trying to photograph the Asian Paradise Flycatcher (male) for a long time with Swarnava and even with my new friend R. We went to places in and around Kolkata to see this bird but have always come back home with a long face. While the possibility of finding it here could not have been ruled out, to assume that I would be lucky enough without efforts would be naive. My friend Manish had also taken an interest in birding, especially after visiting the Okhla Bird Sanctuary with me. I decided to give him more input, exactly the way my brother did to encourage me into birding.

No sooner did the Government of India issue a “red alert” on zones that included Manali, did we plan our trip to the hill station. It was pretty disappointing to make plans and then not go, right? I stayed calm and asked, “It wouldn’t be life-threatening, right Manish?”, to which he did not have a black-n-white answer. Of course, as well-informed adults in the age of the internet, we wouldn’t plan suicide; would we? After browsing through weather reports online, the errors made by such reports previously, asking local people online on the social media groups, and talking to P over the telephone, we decided to go!

It did not rain. I am writing this blog post from Delhi. So, spoiler alert – we did not die. We faced some rain for over half an hour while driving back to Chandigarh, a week after the red alert was sent out. We however found charming cloud patterns that formed and dissipated, tighten up, and pour down on the next mountain. Now that I think of it, it has always been the mountain next to us that got the rain, be it near Manali or Sissu, the village in the Lahaul valley. Damn neat!

While the rest of the evening was spent discussing the Paradise Flycatchers, Monal, and Jujurana (Western Tragopans), I assumed it would not continue the next morning. When I woke up the next morning, I could not find my camera. A little taken aback and then very pleasantly surprised! I noticed Manish patiently scanning all the trees through the lens from the balcony.

“How long have you been awake?” “Since early morning, the bird you got… there are plenty of them just outside the boundary!” “Oh is it?”

From the balcony of the homestay, we saw a lot of birds that ranged from the small tit birds to the Himalayan Griffon vulture. I wish our hike up the Manali Wildlife Sanctuary was even 1% as crazy as the homestay, of course, w.r.t birds. At the Wild Life Sanctuary, we saw a lot of big crows (ravens), Niltava, Minivets, one Common Kestrel, Chauff, one bird with a greenback, and one incredibly cute bird with a grey head hiding in the bush. Nearby is a Nature Park and Nehru Pheasantry. We saw pheasants and Monals there. I did not however photograph the birds because they were caged. One Monal was however a little outside the cage for maybe an evening stroll. It ran back as soon as he saw us 🙁 In case you want to see the photos, please head to my Instagram/Highlights.

The homestay, located a little away from the bustle of the city, is a pretty cool place! I sat on the swing and P appeared again. I wished him a good morning because I am a nice kid, but not really nice enough to follow the conversation he was trying to have. My ears were alert when they heard the phrase, “There is the long-tailed bird you were talking about last night. See, there is it! White… there..” pointing to a really far place, far far enough for the noob that I am. But then, I did see…

The day passed and the night came. P asked in his Hindi, “Did you get something new today? There were many birds…” We were joined by S, a computer engineer from Kanpur, who bikes in the mountains. He is a very sweet person who dissolves in a group. He hikes, he bikes, he plays with Huskies, and chops onions to help our homestay-didi. I like people like him and we were instantly friends. Sadly, neither he nor the homestay-didi trusted me with a knife. I was kept away from the kitchen. During that discussion, I put forward a wish to develop small tools inside the homestay premises to make it a destination even more attractive for birders! I went mad inside when he told me that during the winters, Monals and Khalijs come down to the villa, in search of food. Well, black bears and Leopards do too, but I chose to carefully ignore that bit. Like, seriously… the villa is surrounded by apple orchids, the Beas river, mountains, open land and is visited by very different birds (and insects, which I choose to ignore). It also has a husky that always wants to play.

The morning next followed the same routine. While Manish was scanning through the trees and the clouds to see birds, I went out for a walk. The homestay-didi and her friend asked me whether I got the white tailed bird. Two steps down, the homestay-didi’s son K, asked the same. I told them that I am not lucky enough… I went up to take a bath. The bathroom’s geyser wasn’t switched on and freezing to death wasn’t my best idea of dying. I sat down, pretty purposeless in life looking at the wall, my back to the door when S started beating the door. “There!! Your white-tailed bird is there…!!” Everything had to wait. We rushed out to see the “long white-tailed bird”. “There…” … “There…” said S, pointing from one bush to another. He saw, Manish saw. I couldn’t. After some time, I saw the tail. After some time, the bird came out from the bush to the wire, from the wire to the top of an apple tree, and from the tree to another wire before disappearing into the dense green. 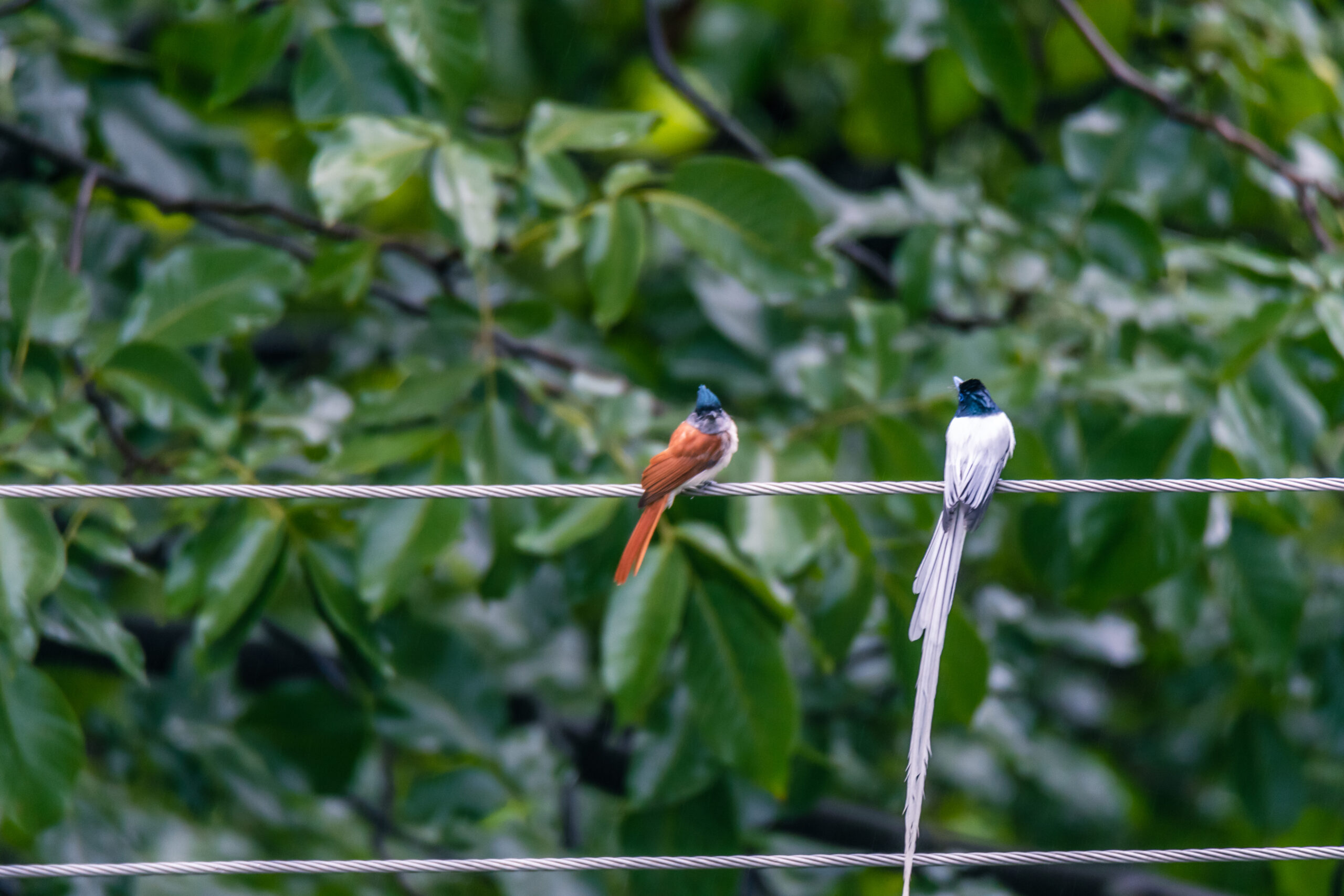