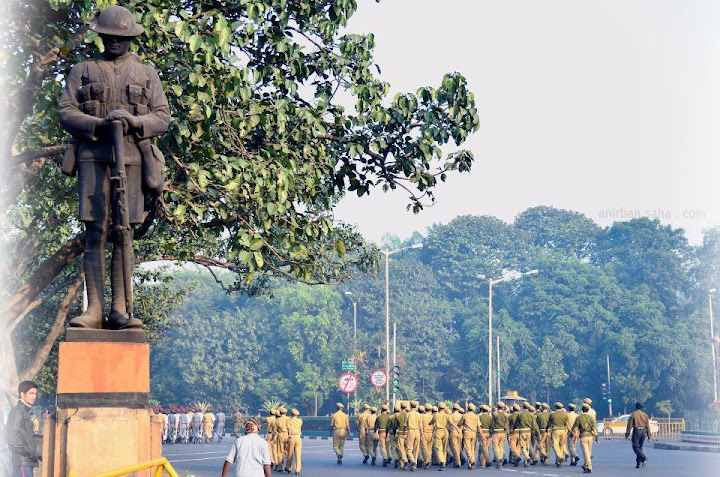 Guys, last week I was out with my camera. This week, I couldnot manage it. But would like to discuss one shot from that day.

Indian army was preparing steadily for the upcoming January 26th, 2012 –  the Indian Republic Day Parade. I looked at them with amazement, as they practiced. There were the artillery, navy, and different regiments. There were few schools participating also.  Had made a new friend –  Lt Sharadwata Gupta. I failed to keep his request this week 🙁 I hope to surprise him soon.

I started shooting at near esplanade crossing. Was not satisfied with the photographs.
>The cadres were marching towards the west, and since I was facing them, I was standing against the sun. This meant either my subjects turned silhouetted or I had to lose the background information completely.
>I tried hiding the sun behind the tree, made f stop = 22, tried making some effect out of the star and that worked. It started looking good, when I noticed, that the statue of Netaji was pointing in the exact opposite direction of where the cadres were heading to. So I had to change my position.
>I got something that would satisfy me… this statue at the gateway to the monument built for the “glorious dead”

I wanted to frame the statue, the cadres marching and behind them – the statue of Netaji.
But this is what I have come up with.
There were stupid pedestrians who behaved as if no one created the footpath for them or they don’t know what a “red traffic signal” means. I cropped out the people from the left, and the barricade below, thus shifting the statue to the extreme left. Never the less, the entire statue-tree portion comprises one third of the frame.
I used a blue tone to the photograph. It was already misty, and greyish, I added a blue tint to it.
I vignetted the right and the left portion a bit, and I donot remember why 😛

would like to get your views on the photo/ and how will you overcome the mentioned constraints to photograph them while they march?