Travelling and photographing events have always led me dive into the uncertain. And after months, I was the same mad Anirban Saha, I cherish having been one. In spite of the Doctor’s prescribed rest, the increasing workload at office and the unconfirmed tickets… I managed to have the Kumbh experience.

And trust me; words shall fail if I try to describe the Kumbh. No place as holy as the Sangam during the sunrise, with a lakh other bathing in it. The only warmth to receive was that of the people. A new insight to my own being – varied, plural and accepting all that came to me.

And I believe, we all felt the same that very moment. The connect of ours’ with that of the sand below, the water in front.. the chill of the breeze, the hymns and the rituals and finally the rising sun. That for me, defined life. The way we camped under the open sky. The life was when one of the purohits’ came to me with a new blanket and kind words.

I stayed there for 20 hours and I did not explore the entire of Kumbh. I visited few Akharas, bridge number 7 till the Sangam.
The entire night I sat sharing talks with few others from Varanasi, Delhi and suburbs of Uttar Pradesh and Bihar around the campfire.

Let us know few terms before we proceed :
Naga Babas – The Yogi’s of the Naga sect .
Sangam – The confluence of the three rivers – Ganga, Yamuna and the hidden Saraswati.
Akharas – Sects / Camps of the Yogi’s.
Ghat – River banks.
Pranami – Donation / Token of money out of reverence.
Shahi snan – The time for the Guru’s and religious leaders to bathe in Sangam.

This is the place, where the universal religion of Din-e-illahi was conceptualised, and this is the place that rejoices humanity above all. The pilgrims are innocent, warm and welcoming. They flock on the sides of the road where their Godly manifested human Gurus’ walked their way to the ghat on the auspicious Mauni Amavasya, to take a dip. A single dip is all that was required for them and all of us to connect to the Almighty.
This time of the year, the Ganges is supposed to bring alive the “Amrit” or the immortalising nector. The story is based on the stories of the Samudra Manthan (the churning of the ocean), and this year the yog (timing of the amavasya) is extremely holy and has come after 136 years.
The Naga baba was saying all of these while we shared a puff of the cannabis. I did not know what to believe. His sense of conviction challenged our singularly scientific world, and talked of the soul and the Sanatan dharma (of which I understood quite less, as he went on speaking in complete Hindi).
To me, the immortalising factor was meeting the set of amazing people. The immortalising factor was the bond we shared within minutes only to part ways, to see the fog clear and the sun rise at the Sangam.
I do not believe in an afterlife. I believe in one singular life. And I have only this life to work, love and spread smiles across to friends. No bond with God as strong as the bond you share, the moment, with the one you gift a smile to. I had picked this topic up within a discussion with one of the Naga baba’s. He then spoke of our own selves. His words had striking resemblance with that of Sri Sri RamKrishna Paramhansa Dev and the ideologies I have grown up with and believe in.
One of the Naga baba’s, I do not know why, maybe because I am young, he called me to his sermon and started blessing me. When I offered pranami, he refused it. One of his sermon lines was “Pehle jaano, phir maano” (Know from the experienced, experience it and then believe in it). I do not know what he precisely meant, but that seemed rational.
Sanantan Dharma – the concept of Hinduism is the natural order of being; the natural order of connecting to the elements of the nature, our souls being an integral part of it. (“For more details, read www.rampuri.com” …and yes, one of the good English speaking yogis from the Juna Akhada told me that! I am sure to go through the entire website in details some time real soon.)

The darkness and the fog made its way to the early dawn. People started flocking for the Maha Shahi Snan. The normal pilgrims were not allowed to the sangam, as it was the time for the Shahi Snan. We photographers hardly got a legal chance to photograph. I waited for some time and some opportunity. The police was at times harsh, and that was an absolute necessity at that point in time. But some kind talks always help. I found a safe place within the police at the start of the road and some sort of unspoken confirmation that I may photograph. The Naga baba’s were rushing onto the streets all of a sudden, and I seeked an opportunity there. I got to the middle of the crowd of the Nagas, trying to photograph them. I also pulled in a spanish guy – Emmanual, who happened to have taken the same opportunity. While I tried explaining to him what “Har Har Mahadev” means and why we all were shouting them while running, he was amused. At the start of the bathing ghat, he was caught, while I managed to escape through shouting “Har Har Mahadev” !

The Maha Sangam – I am not sure, if you get immortalised after you take a dip. I did not take a dip. I washed my hands, my feet and sprinkled Ganga water on myself to purify me and I offered the Surya pranam. It felt very pure- the rising sun, the merging rivers, the breeze… you and a million others; that is a triumph of the belief, the belief of having connected to your own self, a moment of peace. I mentioned in the opening lines – No place as holy as is the Sangam during the sunrise.
The Nagas and the other Yogis, the police, the pilgrims, the media and all the tourists.. thats the perfect recipe for a chaos underlining spiritually. There were near 3.3 crore people (information not verified) from various sects of Sanatan Dharma ( Hinduism ), and visitors from across the world. I travelled alone and in the 20 hours that I stayed there, I kept searching for people who would understand English or Bengali, or is a photographer. This while, I spotted a monopod and 3 photographers along with it ! They were from Kerala. I met tourists from Israel, Italy, Germany, Australia, Portland USA, California USA and I do not have a count of the Bengali photographers I met. PS : There were other photographers as well. Most notable of them was the Spanish Guy – Emmanual, who did not even understand much of English. He read about Kumbh in Spanish and the very next decision was to be at this place. And another photographer from Varanasi who knew Bengali – Anand Sharma who was extremely kind.
I do not know what to add to this blog post. I love these chaos. I love travelling and reading. I do not know what the dip might do to you, but the Kumbh experience shall only make me humbler and more accepting by my nature. This is an enormous experience, an asset in its own definition and I shall look forward to the next, and this time a planned tour 🙂

A slideshow of snapshots for you (wait for it to load): 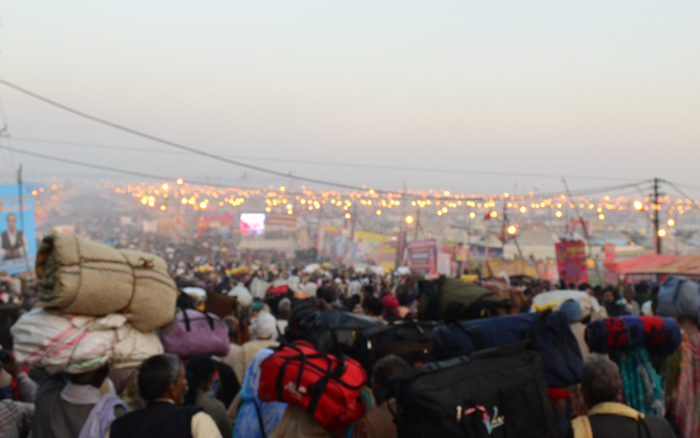 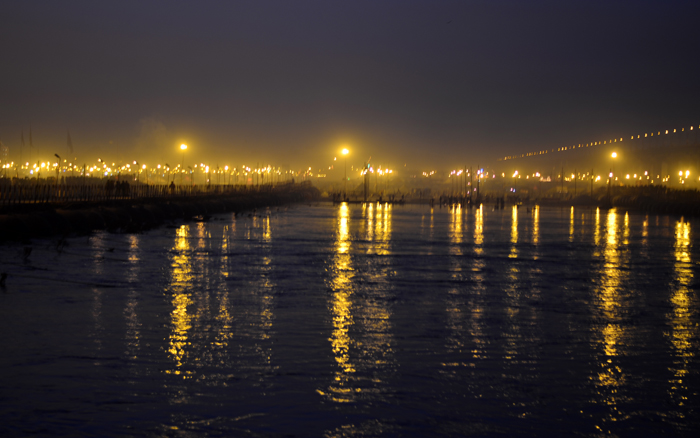 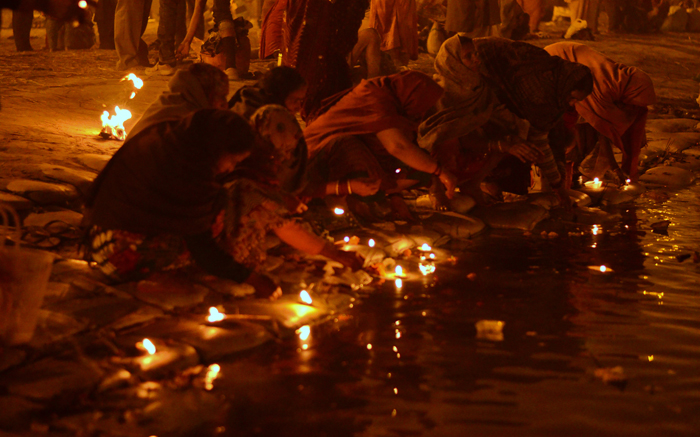 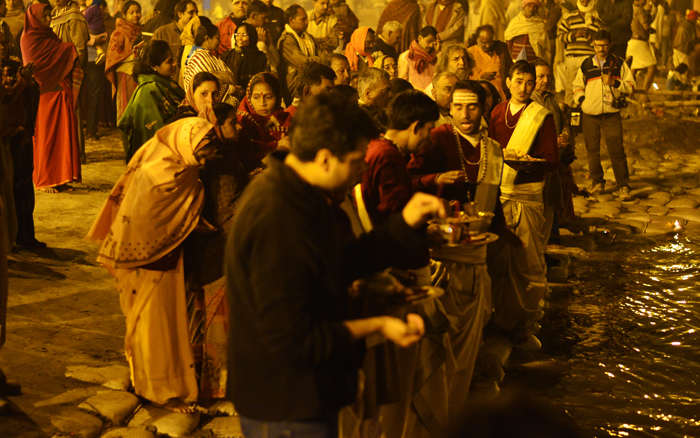 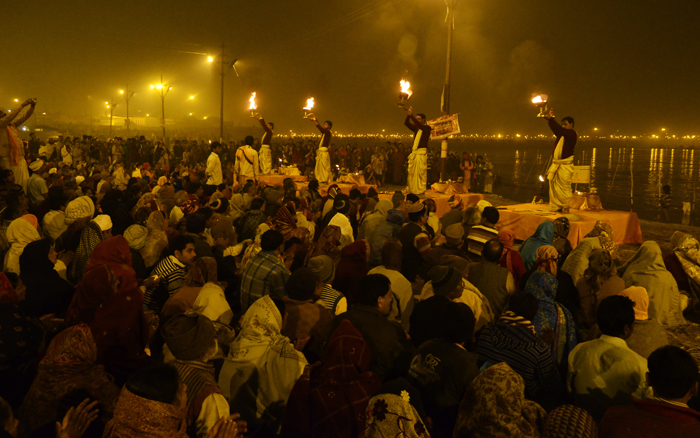 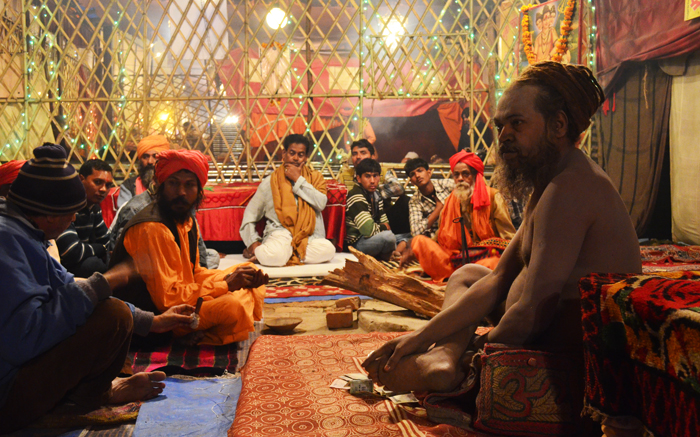 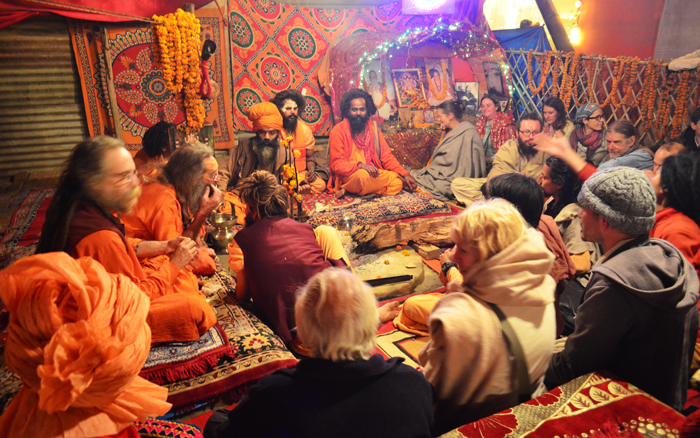 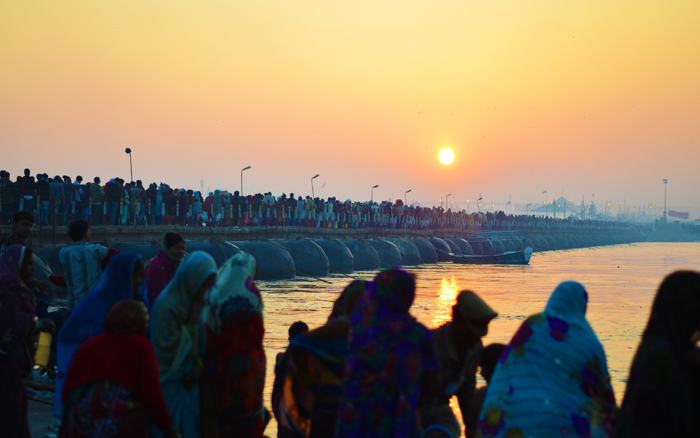 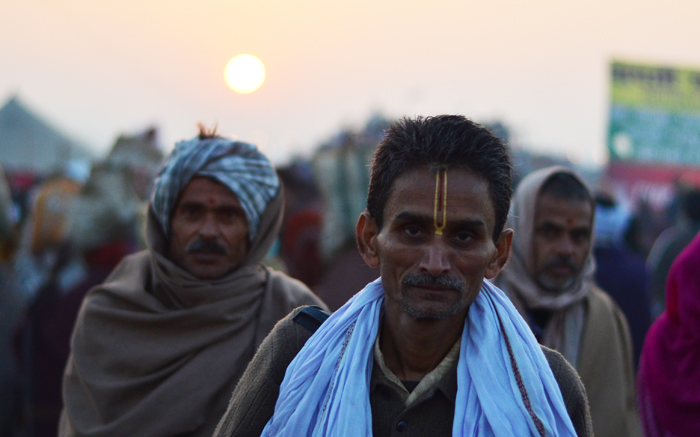 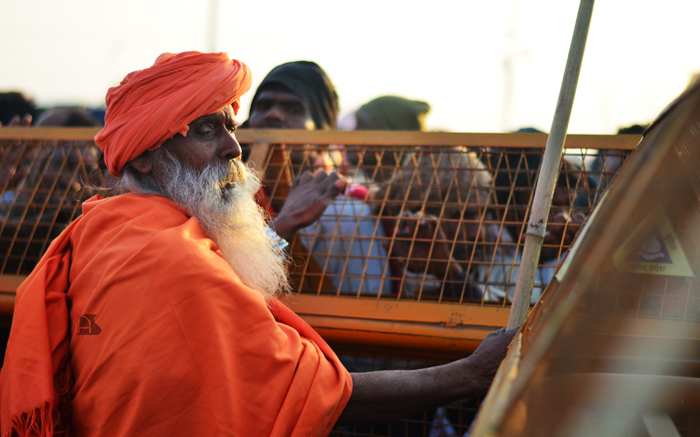 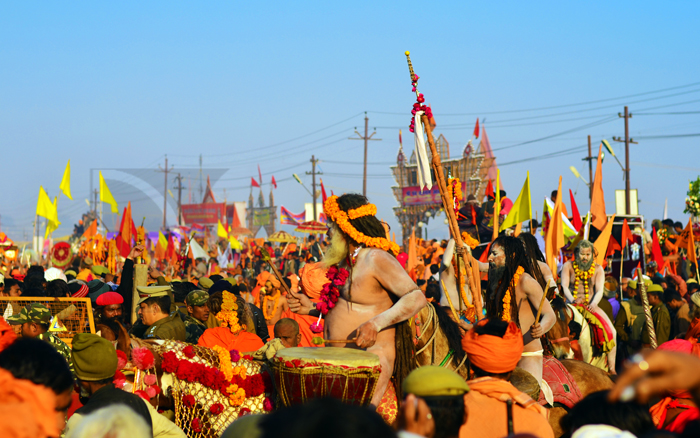 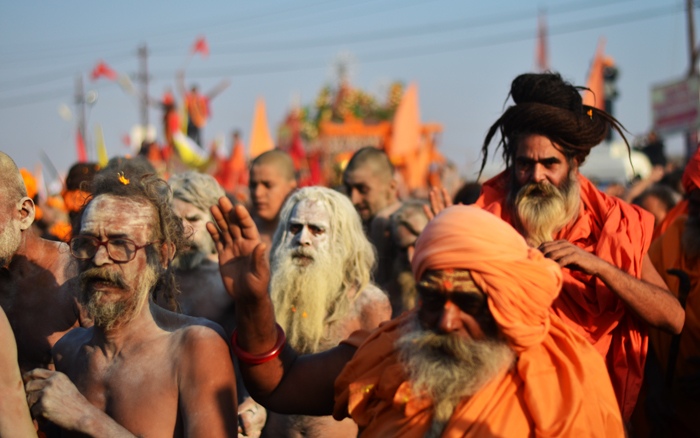 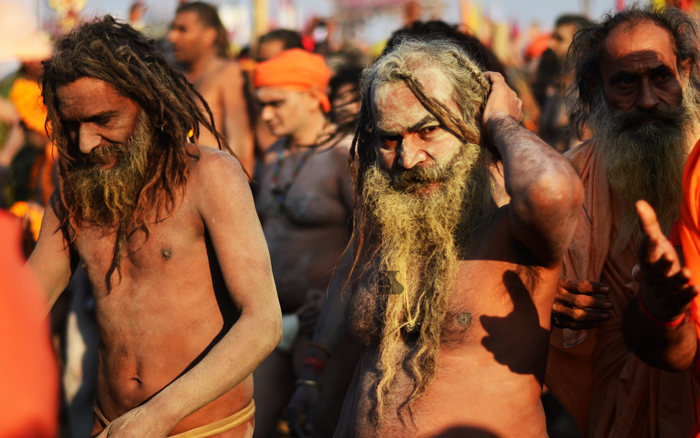 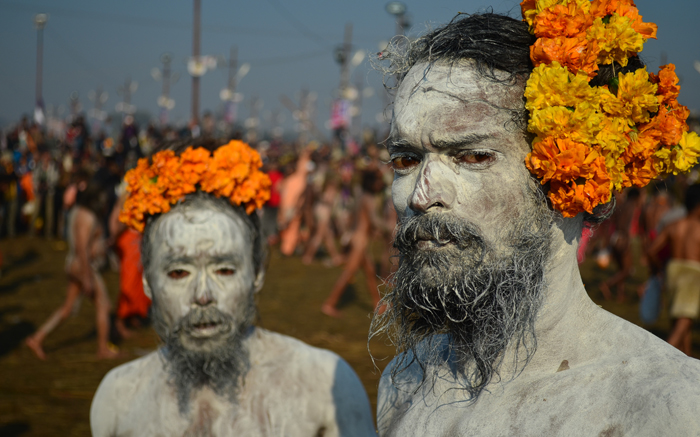 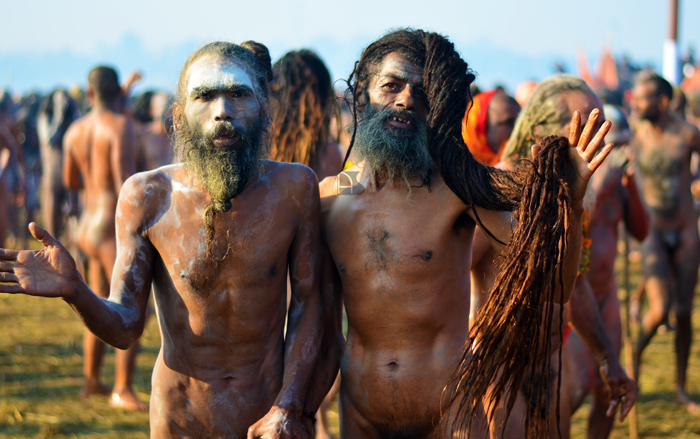