Hi friends,
This week, my blog post will feature 10 things I came across in the last few days but could not manage to talk much about it. I’ve spent time with family, friends, shooting people, searching for European remains in Bengal and old heritage buildings. 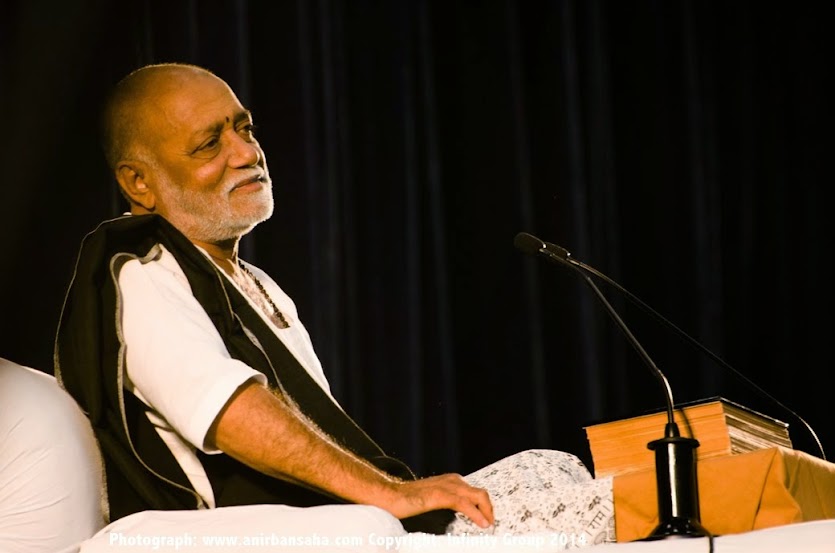 The effort of a hundred good works and the goodwill made goes to waste, if you have one bad friend motivating you.
– Murari Bapu.

Murari Bapu is a religious guru and attracts a very consistent audience. While photographing him, I listened to him very carefully. This is one of the few things that keeps me thinking even now. I thought of sharing this “Food for thought” with you.
(The Copyright of this image is with the Infinity Group, who was one of the organizers. I was the photographer on their behalf.) 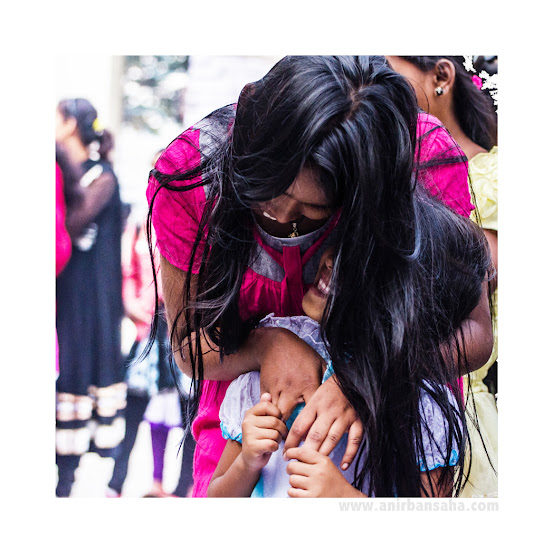 The joy of sharing.

While this photograph did not attract me at the start, it definitely brought a smile on my face after I looked at it for some time. So, when was the last time you whispered into your sisters ears and smiled?
I shot this in an event called “Protsahan”. It is a part of their Corporate Social Responsibility schemes and the organisers did not want to be named. I came to know, near 10 schools are funded by this organization. This event is like an inter-school festival, where more than 40 schools that educate underprivileged children participate.

The day before, I was invited by the Rotary Club of Behala to judge their inter school competition “NXT 2014” event of photography. A good amount of schools participated there as well.

Children are children, as long as they are not heavily socially conditioned, they come up with unique concepts and ideas. I took some time out and had a talk with a few vegetable sellers in Koley market. One of their sons go to a school which caters to under privileged children. While I was excited to see the quality of education provided to the child, I hated the way the father suffers from negativity. 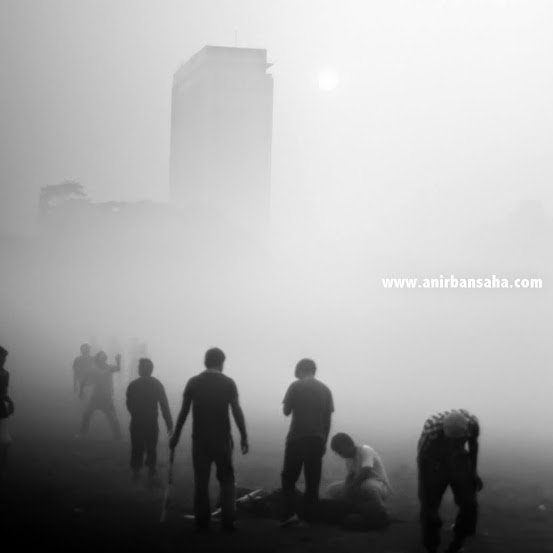 Shot at Maidan, December 7, 2014. I set out of my home at 4 AM and strolled across the streets. Trust me, nothing is as peaceful. With warm clothes on, earphones plugged in and Anoushka Shankar dominating my mind, I walked almost 5 kilometers starting at 4 AM.

Sometime later, Rangan and Aditya joined in. This photograph was shot at 7:30 and that was the amount of fog. We reached there before the sun rise and we could not even see what was 3 feet ahead of us. I am definitely sure Aditya and Rangan thoroughly enjoyed it.

Do you know Bengal’s culture is modified by as many as 8 European nations? A few notable of them are the Dutch, the French, the Armenians and the Greek. I went with a few acquaintances of mine, to Chinsurah. That is a place where we have sizable remains of the Dutch in Bengal.
This is the grave of Susanna Annamaria. If local stories are to be believed, she was married to 4 men and has inspired Ruskin Bond’s “Susanna’s seven husbands”, which later was made to the Indian film “7 khoon maaf”.
A section of the researchers, however reject the claim.  This temple styled tomb has not much information scribbled on it, but definitely had lovers’ name written in the interior walls. This octagonal structure is a fantastic example of Indo-Dutch architecture.
The Almighty gifted me the cloud that time. I feel blessed.

Photograph(s) 5: The Armenian Church of Chinsurah. 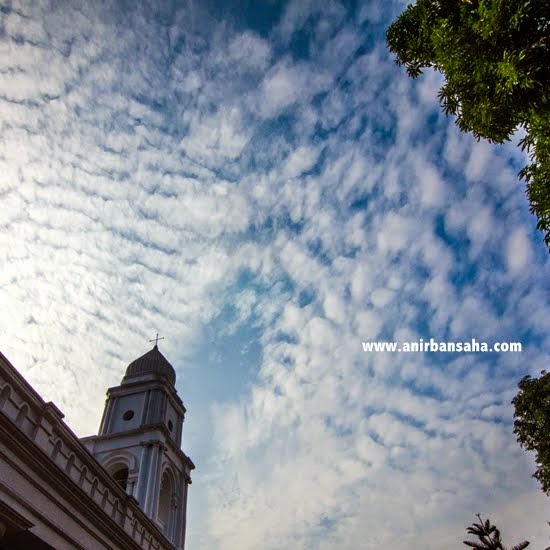 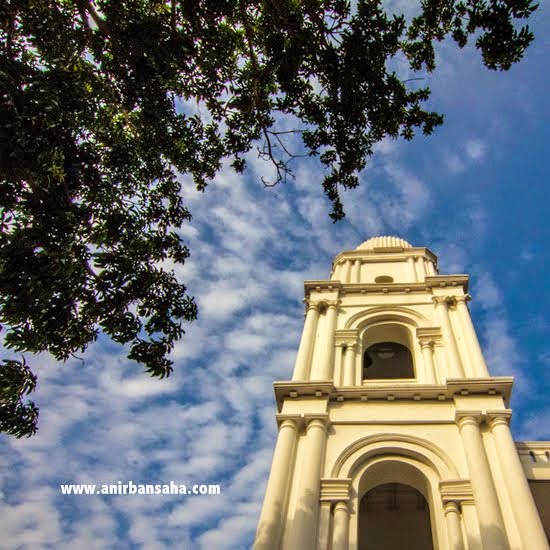 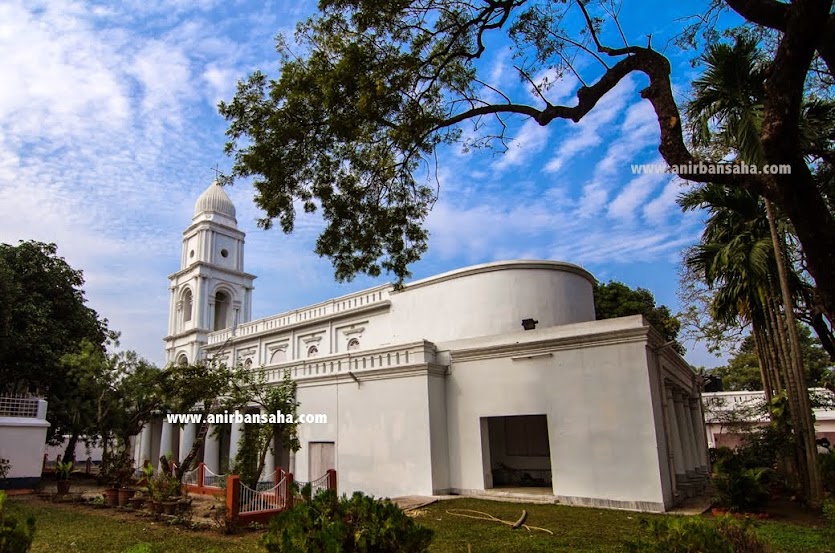 This photograph is of the Armenian church of Chinsurah, Bengal. This is one of the oldest churches and the oldest Armenian Church in India.  Do you know what the Armenians did business of? Google and let me know.

Photograph 6: The Greek Church in Kolkata. 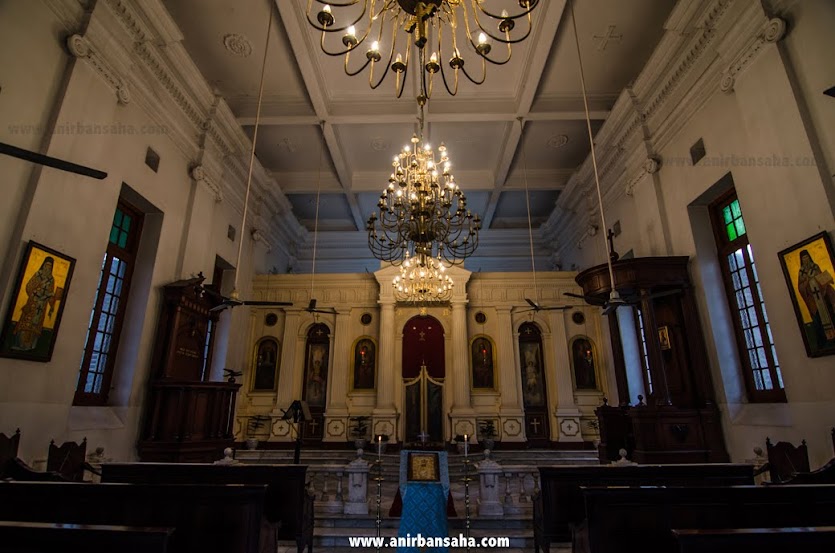 This is the interiors of the Greek Church in Calcutta. You can know more of it, in Rangan Datta’s blog post. Do you know that the Armenians and the Greek celebrate Christmas on the first week of January every year?

Photograph 7: Radhanath Temple, by the Mondals of Bawali Raj bari, in Kolkata. 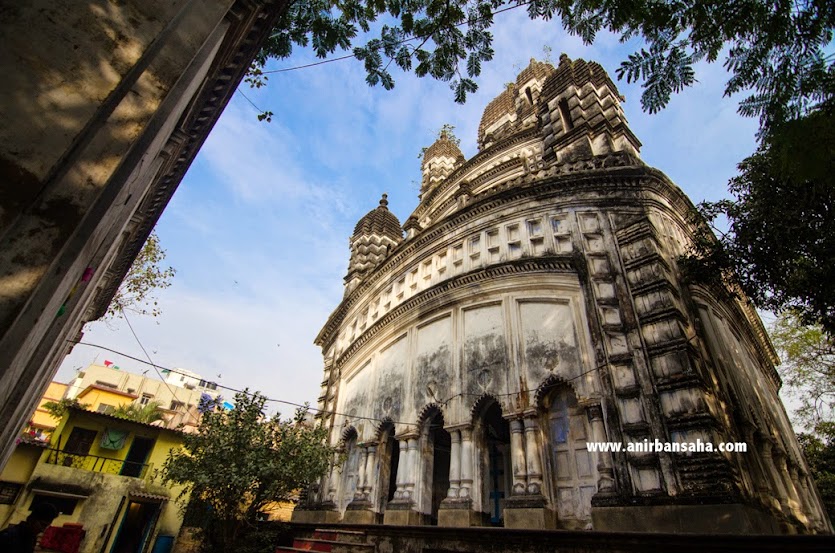 Calcutta also hosts some incredible temples built by the Hindu businessmen here. This temple is called the Radhanath Temple, built by Raja Ram Mondal. Located in Chetla, this extraordinarily big and well decorated temple will be easy to spot however less popular it might be. You can read more of it in Deepanjan Ghosh’s blog post.

Photograph 8: Selfie with my next generation.

My eldest cousin brother from the paternal side, has come to India. Meeting his children, i.e. my nephew, niece and playing with them was some incredible time. It is also for the first time I had a proper talk at length with my eldest brother. Weird, but true!

A special mention of my Boudi (sister-in-law) also needs to be there. She finds Kolkata greener than before and has noticed people following Traffic rules!

My niece, Aishani (Kapu) is growing up so fast. She can now construct sentences of her own and communicate what she wants. She isn’t a cry baby at all. If some random kid in the mall does not respond to her talks, she isn’t shy enough to walk up to him and give him one tight slap.

This is not a new photograph. This was shot when Kolkata led out a peace protest against the heinous Delhi Nirbhaya gangrape case. A lot had happened since then, not that the rape incidents came down. Delhi today is trying to recuperate from the Uber rape case.
Kolkata seemed to be so different. It stands 15th in crime against women in India. However Bengal ranks 3 in reported crime against women. The state has the highest action per report ratio. But all these statistical jargons failed to motivate me when a friend of mine was chased by suited gentlemen in Park Street as recently as last week. She was saree clad and not in short clothes.

While explaining to a friend how social media help me in the plagiarism case, I realised that my Facebook page has crossed 5500 Likes, by only blog posting.  I hardly share photographs in any forum, I do not tag people unnecessarily. Less than 20% of people who have Liked the page are in my friend list, most of them added me after liking my page. My Google+ profile shows 4000 people, most of them are not Indians and photography enthusiasts. To my utter surprise, I saw I am added by 670+ people over instagram. I still do not know how exactly to use it as a platform and I am pathetic with hashtags.

There is an increase of mobile traffic recently, more than 30% of my blog viewers access my site through their mobile phones. If you are one of them, please let me know if you find this site mobile friendly and if you have problems navigating through it.

I’ll leave you with 2 photographs I have taken recently. Saurish is one of the very few friends who has been silently consistent in my life in the last 3 years, helping me and supporting me. Souranil is a kid! Both their faces are big time challenges for an amateur photographer like me, to shoot. 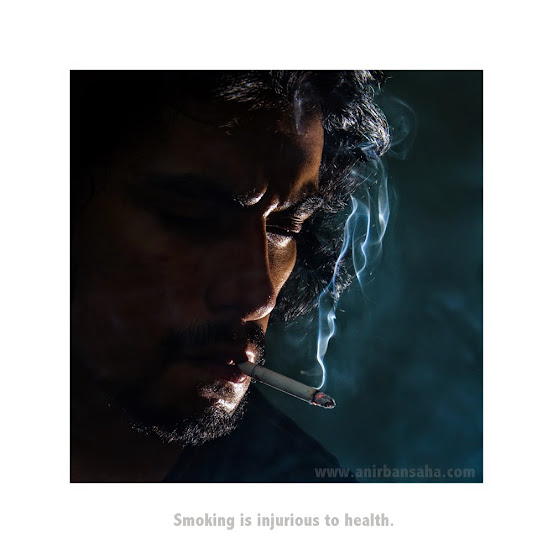 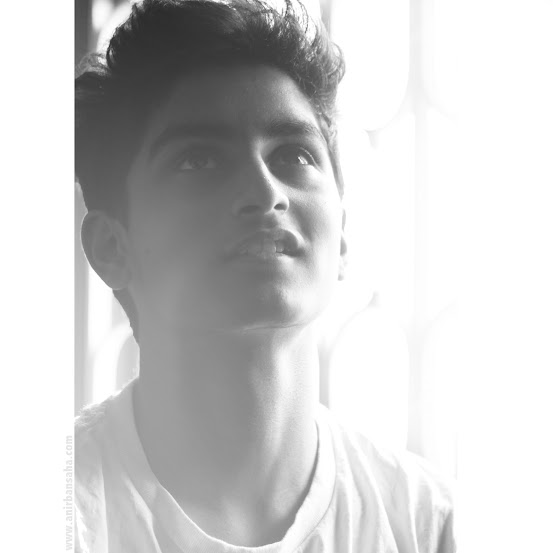