About Bengal Government’s advertisement, Government officials, unauthorised use of my photograph, Intellectual Property rights and one week of inaction.

It is no secret that I hold the present West Bengal government in high regard. To help it in anyway and to promote Brand Bengal on any platform is my honour. But with all dignity, lawfulness and correct ethics.

Last Sunday August 10 2014, I got a call from Baban Das Baul. He was surprised and very happy that his photograph was printed in Bengali newspaper “Protidin” in Murshidabad. That day he was performing in Rabindra Tirtha. Towards the end of the conversation he asked me why I had to “sell the photograph” which was otherwise shot for educational purpose. That afternoon my friend Amartya, congratulated me and informed me that my photograph was “selected” by the Government.

So, what exactly happened? Photograph stolen by Government of West Bengal.

I was quick to realise that the Government advertisement used my photograph in an unauthorised manner. Obvious because, I did not give anyone the original photograph, no one asked for it, no one informed me. To put it in a slightly less dignified manner – they stole my photograph.

I rushed to the newspaper store and found this. The Times of India, page 3. 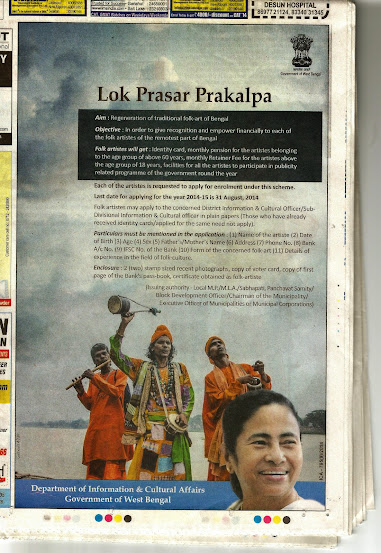 This photograph of the Bauls was shot in Murshidabad, during the last week of June 2014. This photograph was posted on my blog on July 5, 2014. You can check the blog post here. They had downloaded the photograph, removed watermark and have used it.

I tried contacting different people I know from the government but to no help. My own Mama (Mr. Uttam Kumar Saha) was busy in his preparations to host the Chief minister Mamata Banerjee in Gangarampur.

I forwarded letters to my friends who are close to TMC and the letter was pushed to the Chief Ministers office. The CMO informed that this was a matter of Department of Information and Cultural Affairs.

Mr. Riten Roychowdhury, Director, Department of Information gave me a patient hearing. And that was all that I had got from him. No assurance, no actions. Slight rudeness towards the end of the conversation though. A day after the conversation, I had dropped him an email, keeping Genesis Advertising in cc, Principal Secretary of Dept. I&CA in cc from my TCS office email, pasting every possible evidence (except for the RAW image file) to him. You can check my email to the Director, Department of Information here.

The receptionist of Genesis advertising (who prepared the advertisement) was the most amusing, indecent and disgusting person I came across during this phase. He refused to transfer the call to the manager. He refused to listen to me. He shouted at me calling me a liar and that he has come across many “namuna” like me. He said they were all busy and I was trying tricks to disrupt their work, I should keep shut else he shall make sure he gets the better of me. Was it a threat? That coming from the receptionist is amusing.

What I wanted: An Acknowledgement letter.

I did not even want money for the photograph. I want an acknowledgement letter stating that this photograph was shot by me and that it has been used without my consent. If the same photograph is published later, as I believe it would be, putting up “Photograph: Anirban Saha” in the smallest possible manner won’t really harm.

I am thoroughly amused. Yes, I am. See – I am smiling now.

Ironic, the Government – custodian of rights, steals photographs themselves.

The Government is supposed to be the custodian of basic rights. Ironic, that the Government itself is not taking action against the advertisement maker who is stealing photographs, removing watermarks and publishing it in their advertisements for the government. For any artist, the fundamental right should be his rights over his creations. That is – Intellectual Property Rights. For a poet, a painter, a photographer in India, copyrighting each photograph is not the rule. I am told by my lawyer friends, every time I press the shutter and produce a photograph, I hold the rights of reproduction. A group of IP activists and experienced photographers, confirms the information that I have.

I am thoroughly disheartened and discouraged to say the least, praying that they respond to my email. To hire a lawyer and to produce evidences in court is something my schedules might not permit. Not that I even have the financial backup to fight the case against the Government of West Bengal. I did not know what to do. So I am blog posting about it now. Let’s see how it proceeds. If any lawyer volunteers, it shall be great.

I write this today with a paining heart against the government we all voted to bring it to power.