Kayged festival. This masked dance practised in Eastern India has its origin in Tibet. Shooting most of this festival with Tamron 70 – 300 was such a smooth experience.

The Tibetan dance “Cham” is quite familiar with people fascinated by the ever varying Indian culture. However, very few resources in English exist on the internet.  Having got the slightest hint of the supposed magnificence of this dance form, I wanted to photograph it. 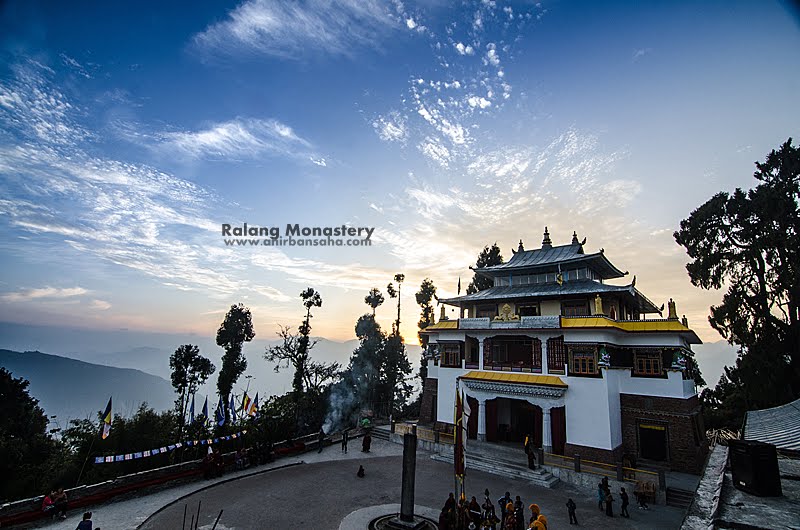 And there I was at the Old Ralang Monastery, during the Kayged festival. People there, do not understand Hindi much. Understanding Bengali or English is out of question. Despite the immense language barrier, they were amazingly warm, welcoming and hospitable. 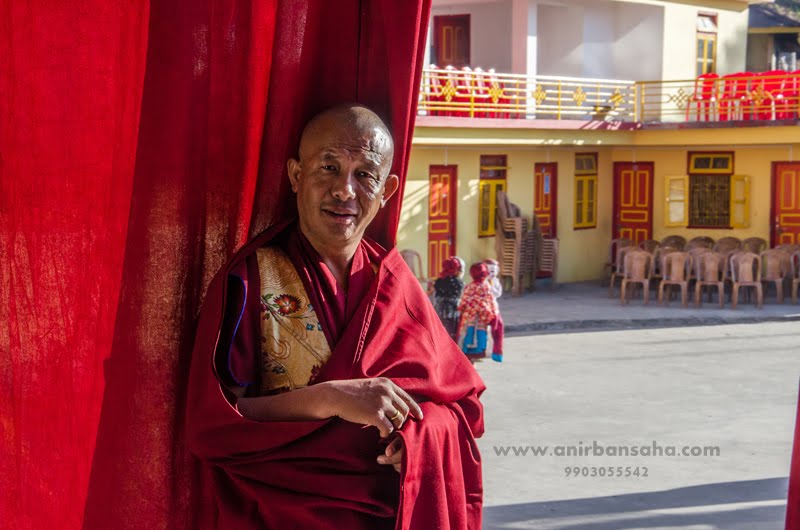 Karma Lama inside the monastery hall.

The Lamas there welcomed us to their monastery and allowed us to stay there. I was particularly surprised, as I never regarded this as a possibility. Karma Lama gave us as much time as he could. Never did I feel I was meeting him for the first time. He discussed the festival and Buddhist way of life. 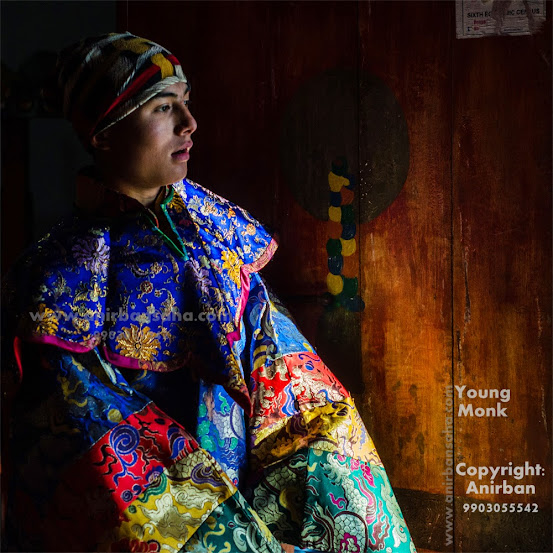 A monk prepares for the show.

Did you know: The Buddhist way of life asks you to remove “attachment”, “arrogance” and “anger” from your character. They are character traits that lead to unhappiness.

The Kayged festival is the harvest festival of the region. It is also referred to as the Dusshera in local communities and is not regarded something very important. Two other occasions that host “Cham” happen in February and in September in separate monasteries in Sikkim and North Bengal.

The Mahakala is the protector and not God.

I am told by the disciples in the Monastery:  This festival glorifies the Mahakala. “The Mahakala is the protector and not God”, said the disciple very convincingly, for us not to be mistaken while re-telling the story. The Mahakala, who was an evil person turned into a good protector (a story similar to Valmiki), is a wrathful deity who protects the soul “from the bad and the threats”.

During the festival, two kinds of dances happen:

The Black Hat dance and The Mahakala Dance. 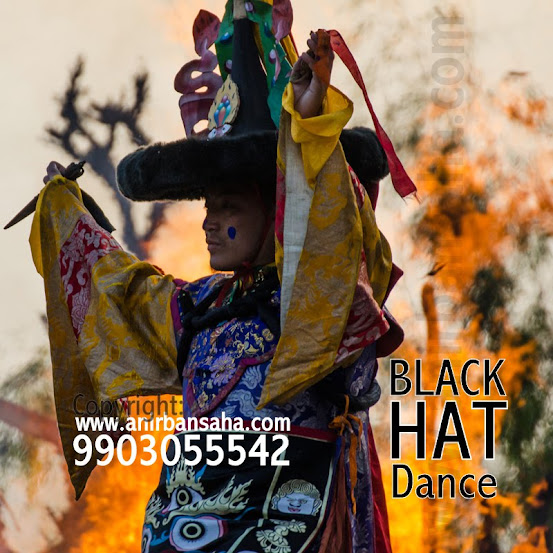 A monk performing the Black Hat dance. Shot with a Tamron 70-300 lens.

There are popular beliefs regarding the black hat dance. In one of the stories, monk Pelgyi Dorje performed Cham dance to attract the attention of the King Langdarma. Having achieved that, he shot him to death and fled. King Langdarma was the Bon Tibetan king who was destroying Buddhism. Pelgyi Dorje had smeared himself and his white horse with coal to not get noticed in the dark of the night. After having shot the king, he rode to a lake thus washing the black away. 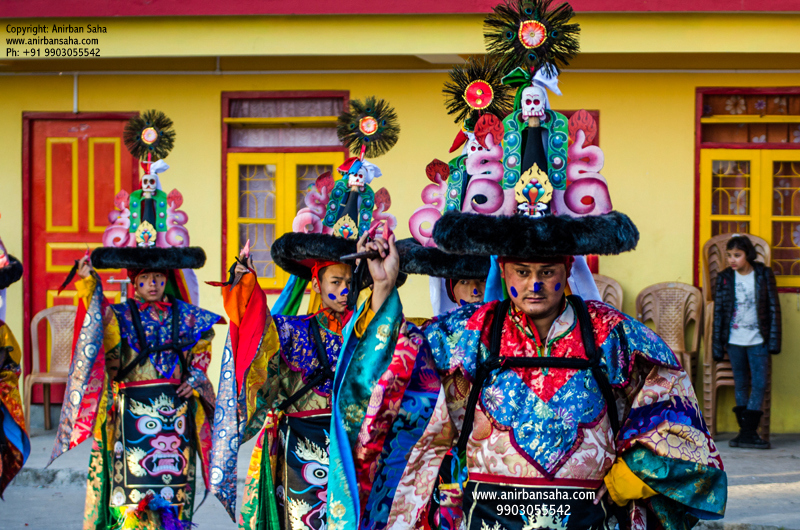 The Black hat dance by the monks at the Ralang monastery.

In one of the rituals, the head priest does the black hat dance, meditates and collects all the negative forces around him and puts it into a clay idol of a baby, which signifies demon. During the deer dance, the deer cuts it into pieces, purifies it and offers it to God. Know more about Black Hat Dance in this elaborate document. 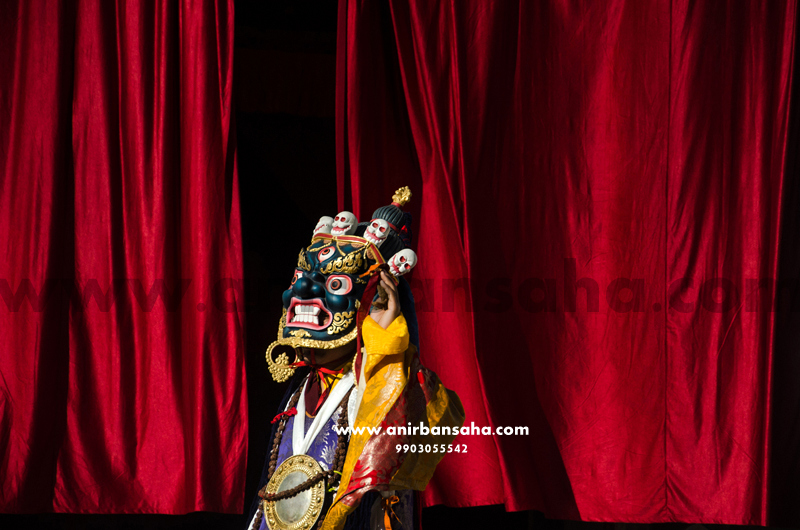 At the start of the Mahakala (Cham) dance. Another shot using zoom lens Tamron 70-300.

The masked dance is particularly colorful. From depicting human faces, demon faces and heads of different animals like the deer, the tiger and even the crow, this dance will interest you. The stories too shall. Each mask represents a manifestation of the Mahakala. However, Karma Lama insists, they are all assistants of Mahakala and the number of assistants depends on the space of the monastery they get to perform the dance. 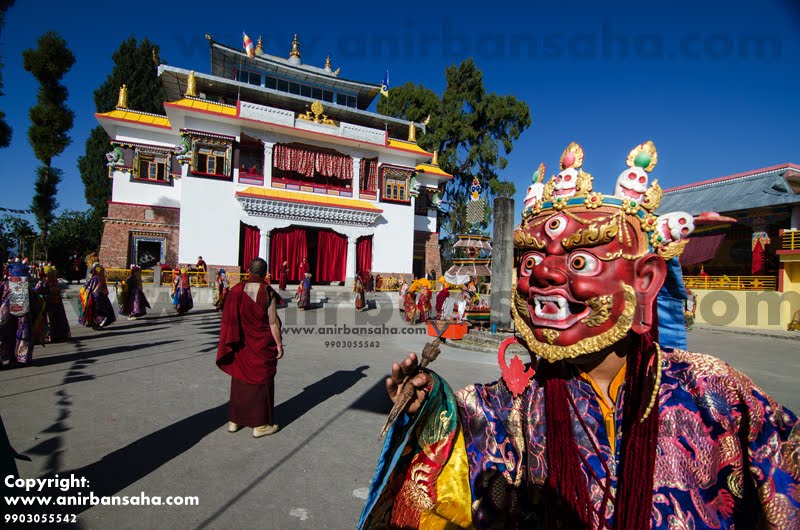 Cham dancer performing in front of the Ralang monastery. This is one magic my wide lens does.

With the entire dance, the bursting crackers, and the rhythm of the music, this festival is some occasion no photographer should miss. If you have any question, please do leave a comment.

It is for the first time I used a zoom lens. Tamron was kind enough to let me test the 70 – 300 zoom lens with USD. I found it lighter than the other lens that I had tried and it was fast enough for me to photograph dance movements. The photographs of which I have already exhibited above. Do let me know if you recommend some other zoom lens. Till then, I’ll use Tamron’s. 🙂

Do you like folk dances and have special interest in masked dances? Are you reading my blog from Purulia, Malda, Uttar Dinajpur (Bengal), Odisha, Assam or Sikkim. Would you like to help me? Please drop me an email at [email protected]