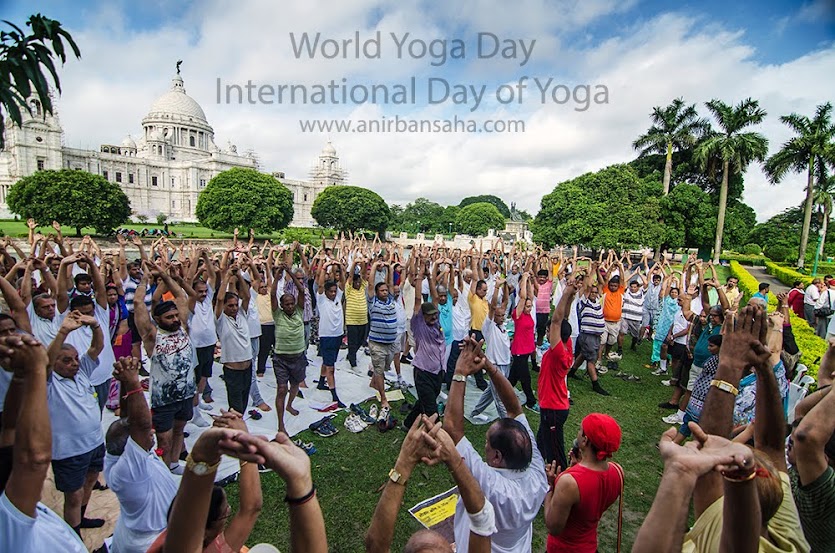 Yoga is one form of exercise which constitutes of full body workout and helps you master your breathing. It also improves flexibility, calms your mind and helps develop immunity. And these are just a few of the many benefits of doing Yoga regularly. Having originated in India, Yoga incorporates philosophy, religion and practices.

In the light of all of this, June 21st was declared as the “International Yoga Day” in December 2014, by the United Nations General Assembly.

The first International Yoga Day was celebrated all around the globe with much pomp and show, including in India.

People have often noticed me being vocal against the political party, which our Indian PM Narendra Modi is from. But staying in the centre, he must be doing something right. Numerous speeches targeting the Indian diaspora outside India, albeit maligned with controversy and not without proper reasons. But the crux of the matter is – he wanted to unite all and set the buzzword “India” across the globe. In simple terms, he’s desperately trying to re-brand “India”.

One might argue that the nation as incredible as India requires no branding. But it is required and at multiple levels. You might have seen your friends celebrate Mothers Day, Fathers day, Valentines day and I am not opposed to it. When was the last time you saw young people come out on the streets and ask their elders about Yoga? when did you last see people discuss how India has given to this world what that is now seen as a preventive measure to almost all major lifestyle diseases?
International Yoga Day helped me come across a few.

Members of Rashi’s Yoga Studio practise yoga in the morning.
When I got down of the Taxi at quarter to six in the morning, it was still raining hard. I hurriedly made my way inside the Victoria Memorial Hall garden and was surprised to see a few elderly people preparing for the International Yoga Day, braving the shower. I could not help but smile. While I might have been there to just click photographs of the Yoga day celebration in Kolkata, it was them who were extremely enthusiastic about the International Yoga Day, Yoga and Prime Minister Narendra Modi.
While the world celebrated the International Yoga Day, Calcutta / Kolkata was not very far behind. While many photographers were a part of the celebrations at Maidan where a BJP spokesperson came to motivate the people, there were many similar celebrations, equally grand being held in Kankurgachi and Rabindra Sarobar. One such was in Victoria Memorial Hall. It was a collaboration between four walking groups, all mid-aged and elderly citizens of this city. Another such workout, if not celebrations, was conducted by Rashi’s Yoga Studio.

You might have seen the youth of this country dancing and perhaps head-banging to the rock music, which is from the USA. Apart from one street named after Swami Vivekananda, Times Square’s name being changed to “Tagore’s square” (to commemorate Tagore’s 100th birthday)  and the western audience being mesmerised by Pandit Ravi Shankar’s music (PS: #BengaliSwag) when did the youth of the USA, celebrate something natively Indian? Not only in Times Square, International Day of Yoga was celebrated in more than 190 countries.

When was the last time an extremely old lady smile and say, “Now the world will respect us. They will learn our values.”? This International Yoga Day was a huge day of learning for me.

I see people around me happy and proud. That makes me happy.

You might be an MNC employee where the HR’s ask you to stretch your arms, exercise while being seated. The exercises are as simple as eyeball rotation. But when did you see industrialists and socialites coming together and discussing healthy living, balanced diet and yoga? “Healthy Billions” headed by Mr. Gunjan Poddar, organised an event in the Taj Bengal where industrialists gathered. Young children performed yoga and later trainers from the Healthy Billions demonstrated simple Yoga exercises for working professionals.

Mr. Gunjan Poddar speaking at the event organised by the “Healthy Millions” .

Performers at Taj Bengal, an event by Healthy Billions

One International Yoga Day might not make the entire nation turn into Yoga experts. Neither is it going to remove corruption or feed the people under poverty line. One Mangalyaan too would not help either. But in the long term, both would. As a short term effect, it makes people of the nation proud and happy. It adds to the brand that we Indians want to create of India. The very recent article of the Wall Street Journal, which mentions that India attracts enough foreign investments to join Global top 10 destinations, (link) proves the same.

International Yoga Day is a perfect initiative to engage and make the masses aware, but on a long-term basis, yoga should be practised as a daily routine to be helpful. The youth needs to learn more about its benefits and practice it as an everyday routine. Even if it means waking up early and giving up precious hours of sleep, yoga should encourage more people to lead a healthier lifestyle. Only then, will the essence of a Yoga day be a fruitful one.
Do let me know what you think about the International Day of Yoga. Leave me a comment.