It was a pleasure knowing that Oxford Bookstore, Delhi hosted the Hindi Sahitya Utsav on the 19th of March. We celebrated the beauty of Hindi Literature, the entire day with very interesting sessions that ranged from discussing languages to the transforming nature of love in today’s world. Particularly “Apni Chuni Raahein – kya maksad kya haasil” (Our chosen paths- the objectives , the results) did catch my attention. 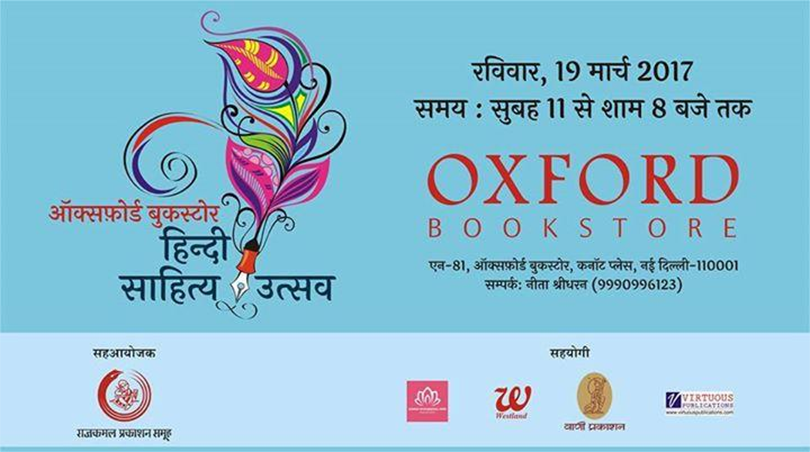 Hindi Sahitya Utsav | 19 March, 2017The discussions that followed were strung with a common thread, Women Empowerment. “Women in the world of Literature” session dealt with the literature written about and by women that had lent a voice to the suppressed during various phases of life, throughout our history. Mrs Poonam Jamwal, Founder and Vice-Chairperson of the Kunwar Viyogi Memorial Trust, focused on the role of Hindi language and women in society. She also laid emphasis on the sad truth that Hindi, today is losing its identity and being engulfed by the dichotomy of Hinglish vocabulary which has become the ‘latest trend’ among the youth.

The Kunwar Viyogi Memorial trust has been named after Late Group Captain Randhir Singh, who was a famous poet in the regional language of Dogri. Understanding the consequences of the Dogri language losing its touch in contemporary times, this Trust has been set up to promote arts and literature in the field of Dogri language and supports upcoming artists in several ways. These initiatives encourage reading and research in regional languages.

Ayushman Jamwal, a journalist working with the CNN -News18 and the author of a popular book “Chameleon Lights” is inspired by his grandfather Group-Captain Randhir Singh (Kunwar Viyogi) . Randhir Singh’s views were much ahead of his times, claims Ayushman.  “He was a man who lived in an orthodox Dogri village but dared to step out of the conventions. The idea of love and family was beyond all the rigid norms of the society for him. He was one of the few men who took pride in having three daughters even when the world around him believed that daughters were nothing more than a burden.”

‘Ghar’ is Kunwar Viyogi’s Sahitya Award winning long poem, written in the Dogri language. It was quite a unique composition that managed to weave all the nuances of our worldly existence and its context and axis being the Home (Ghar). It presented something new to literature not only in Dogri but in Indian literary horizon, a fresh deep thought was introduced and in such lyrical precision and balance. ‘Ghar’ is used as a symbol of the centre of life, our hopes and fears, anxieties, achievements and failures, dreams and also a symphony of love.

Ayushman recited a verse from his grandfather’s collection which goes as follows:

Which can be translated as, “Women have been caged for a long time within their homes, and this situation would not continue any longer. There can only be devastation where she remains shackled. Peace and harmony in a house can be attained only if she gets her due respect”. These lines clearly expressed how much faith he had in a better and empowered future for women.

Urvashi Bhutalia, Matreyi Pushpa, Vidya Shah and Piyush Mishra were the panellists of the session that explored their career choices. Urvashi Bhutalia who owns her publication house “Kali for Woman”, vowed to bring out the women’s voices from the margin of the society to its very centre. Matreyi ji had given up her passion for writing after she got married. It took her a long time as the mother in her and the wife that she was, finally shook hands with the writer at the age of forty-five. Piyush Mishra expressed that his drive to be content was through music, singing, writing poetry and acting. Saurabh Dwivedi, author at the ‘Lallantop’ website shared about his personal life.

Initiatives like the Hindi Sahitya Utsav, though rare, are the hope that the regional language would not die down soon. The enthusiastic speakers and the audiences deeply cared for the sustenance of this ancient language and hence got together to celebrate the richness of Hindi Literature. The topics discussed under the Hindi Sahitya Utsav were very relevant in contemporary times and hoped to provide food for thought to the amazing audience.