A tale of belief:  Gajan and Charak.

A temple courtyard full of people watching performers depicting Gods. I had this wide eyed young boy beside me, who would smile at me and say, “You will stay till tomorrow evening, right?” A sect of the performers included the super believers, who would pierce their bodies, play and dance around with fire to please their God. The boy hid behind me, when his father came to thrash him, drunken… The boy perhaps had spent his only ten rupees note to buy us a bottle of Limca, and save the “Prasad” for me and Sourav, while we photographed the festival. Today I share a story of belief, of trust and of relationship.

Gajan festival or Gajan is a folk festival. Observed during the end of the Bengali calendar, this festival is celebrated mainly in the rural parts of Bengal (West Bengal). The most accepted story of Gajan relates to the conversion of the Buddhist monks to Hinduism. It gradually transformed into a festival of Lord Shiva – the God of Gods (as they said, “Deb’er deb – MohaDeb”). In rural Bengal, there are few places known for its Gajan celebrations. One of them is Kurmun in Bardhaman district, while the other is Krishnadebpur. We visited Krishnadebpur from Kalna.

When we reached Krishnadebpur, the local people directed us to “Mondir Tola” (also known as “Kali tola”), which is the Temple courtyard. They were preparing for the street plays. The preparation includes painting their faces to imitate different Gods and Goddess to enact short street skits. The skits depict mythological stories moulded to suit the folk lore.

Other enactments during the day time include mimicry acts.

While I was taking photographs of the make-up artists painting the performers face, a very young child told me to go to the bamboo forest where the “Kali” was being made. He meant – a man was being dressed as Goddess Kali – or the Hindu war Goddess. He was painted in black and decorated with yellow, red and white. That’s the variety of Goddess Kali you will find worshipped in cremation grounds.

Photograph #3 : Preparation of Kali – the Goddess.

I continued interacting with the child and soon we became friends. He was quite gregarious and his dark wide eyes stood out from the rest of the kids in the area. We were engrossed in his several interesting stories that ranged from Gajan festival to his dance performance or the way he comes first in this academics.

After a brief break at his home, we continued with the skits. The skits include folk lore patches of stories of Shiva and Parvati, Goddess Durga and of Lord Krishna. Incidentally, Gajan folk lore has Lord Shiva getting married to Hara Kali this time. So we had the Shiva dancing with different other Gods and Goddesses of which there were Lord Krishna and Fairies. It ended with Maa Kali standing up on Lord Shiva. Other skits also include the story of Goddess Durga.

Photograph #4: Expression of Kali when worshipped.

Ronit, the child, took us around the place and to places where we would not have thought of going. He asked us to stay back in his home and experience Gajan at night.

The event at the night included all of these and acts / sacrifices that would invoke fear in one’s mind and heart. Ronit stayed with us all the while, guiding us, helping us and at times when he got frightened, he sat on my lap.

Photograph #6: Depiction of Goddess Durga in the street skit. 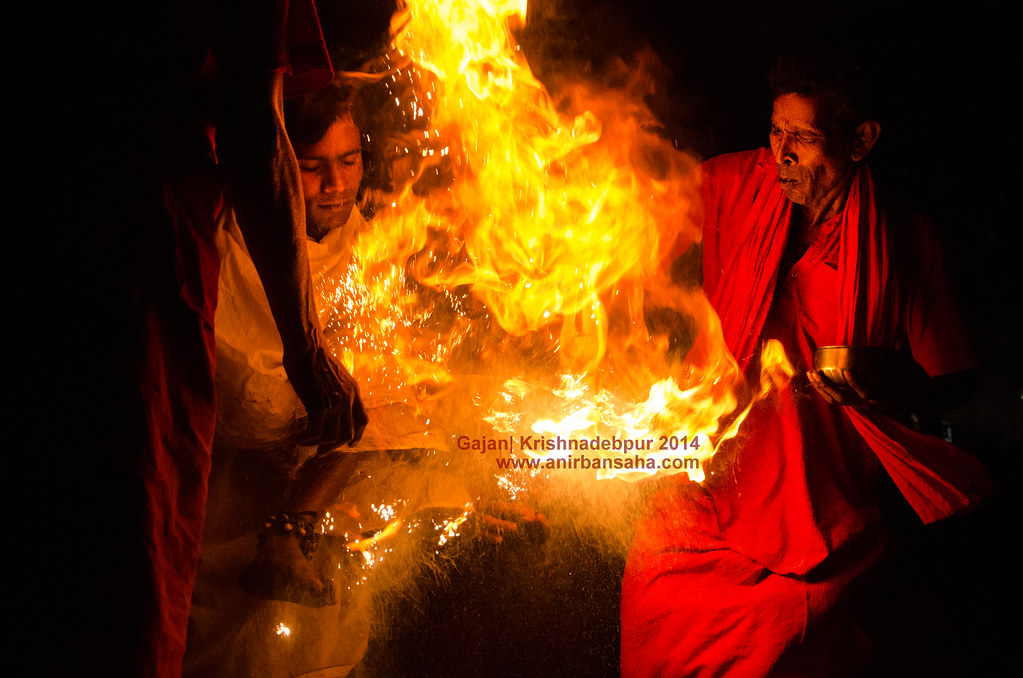 Photograph #7 : The play with fire – the eternal life giver and destroyer.

Photograph #8 : Lord Shiva and Goddess Parvati rests with the rest of the world while the performers perform.

There were these fire games and games that invoked fear. For a city bred lad like me, it is impossible for me to think of piercing my abdomen with iron rods and lighting it on fire. Forget about dancing with it! All in the name of God, simply trusting in Him. The chief priest recited mantras and asked them to believe in them. We had performances where the performers inserted rods, played with edged knives and weapons cutting and slicing themselves. The weirdest of them is – Bandha Kali, or the burnt Kali (War Godess). It was a man dressed in Kali’s attire, with piercing across his body, painted red and black. I believe he had sliced himself at places as well. I’m not sure. He was high on either Mantra or liquor, whichever you might find convenient to assume or believe. He (She) was tied to ropes controlled by a couple of strong men, apparently trying their best to control her vigour and anger. With the Bandha Kali approaching, the crowd broke into randomness and ran for cover. In the rush, I could not photograph him.

The next day we photographed Charak. You can easily Google and know what Charak is. What struck me are the customs there. Not that I was not well acquainted with, but to see it right in front of me, was slightly tough. I had gathered enough strength to see it with open eyes and shoot. Now the weird feeling is gone. Pasting  5 photographs of Charak festival.

There are two kinds of devotees primarily. One who pierce their lips and ears with iron rods and does a victory lap across the field. The other section, pierce their back with hooks. They are hung by the hooks to the Charak Tree (Where the Lord Shiva is instilled) and swung. If you are a faint hearted person, it is not recommended for you.

Photograph #12 : One of the priests look up at a photographer, just before the Charak Puja.

Photograph #13 : The priest gets ready with the second iron rod to pierce into the lips of the boys, while I photograph him.

Photograph #14 : Another devotee gets pierced while the crowd behind cheer.

Apologies, after this photograph, I did not photograph. I’m sorry.

Photograph #15 : Another devotee gets ready to have his back pierced.

The entire experience has been overwhelming. The hospitality of the people at Krishnadebpur had been heart wrenching, the rituals unbelievably superb, the simple people there cheered at the lamest of jokes and mimicry, while the performances gave me goosebumps! My experience in Krishnadebpur has been incredibly enriching!

The very idea of being in a place where people flock together to enjoy in a small temple complex, a place where photographers from the city are not treated as an outsider, fills me with joy. This is undoubtably an experience I would cherish all through.

The young boy – Ronit, took us to his home, fed us with whatever little his mother could manage for us. We slept there, content at dawn. Trusting unknown boys with so much confidence and innocence, I was there awe struck. After we had left, his mother sent 4 boiled eggs through Ronit so that we dont starve for lunch. Later Ronit and Chottu, his other friend accompanied us to the station and were with us till we boarded the train. Such love, such innocence. It felt incredibly special and I will take this a long way in my life. I surely did see tears welling up in Ronit’s eyes while we were leaving. My heart seemed heavier after that. But light at the same time, it was a mix of feelings that I was experiencing. A feeling worth cherishing, something that would stay with me, perhaps for the rest of my life.