“Let’s use one hash-tag to share all our experiences over social media. What should it be?”

“#100FireFlies”, said the very enthusiastic Madhura. The creative soul that she is, I couldn’t object. The sky lanterns had by then dotted the sky like the little fireflies. And somewhere below, thirteen smiling faces looked up in excitement. An evening well spent.

If you are a regular reader of my blog, you might be knowing that most of my newer friends are way younger to me by age. I’ve seen them grow from the kids that they were to now “mature” college students. To call them my family might not be an exaggeration. We’ve grown up together, maturing by bits, sharing our happy moments and moments that we learnt from. Debayan, Esha, Koustav, Harshit and Surrbhi are friends of my age. They aren’t kids but were equally excited about the sky lanterns.

I wonder how beautifully we try newer things, brain storm, fail, learn, try again and succeed. Smile, hug and just be together. And it is not always work.

It could be someone preparing for a romantic date, someone feeling low, fight over Coca Cola, spending some crazy time at Mani Square, bowling or playing air hockey!  Or trying out Dhunuchi dancing at my friend’s home.

What could we have done this time? Something that all would be a part of, relatively new and they’d all be working together? Last year, Debarshi Duttagupta got me introduced to the sky lanterns or “Phanush” as we call it in Bangla. Every year they light sky lanterns from their government housing complex. Over the years, this has become the close friends and photographers reunion of sorts! (Link)

Having been a part of it last year, I knew what I could offer to my friends. *Bulb lights up inside the head* 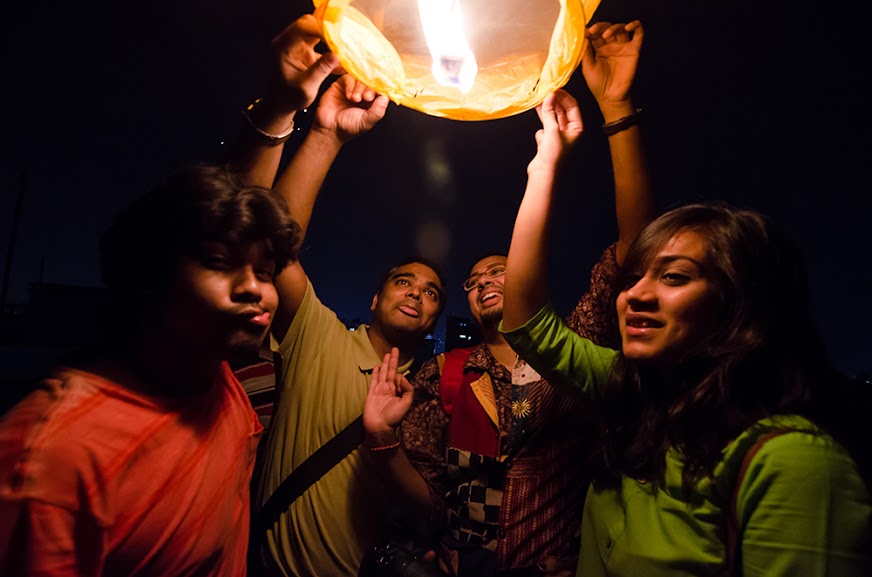 A couple of days of planning, people coming to my home, arranging for the sky lanterns at the lowest possible cost and we were there trying to figure out how to light one.

The first one tore. The second one burnt. When the third one took off, a few screamed, a few hooted and a few sighed. It was a moment of happiness. They did not do something of this sort before and given the kind of memory the Almighty has given me, regard this as my first attempt as well!

I wanted to be a part of it actively working and lighting. With Koustav around, who would even question the quality of photographs that would be made?

It was so cool! 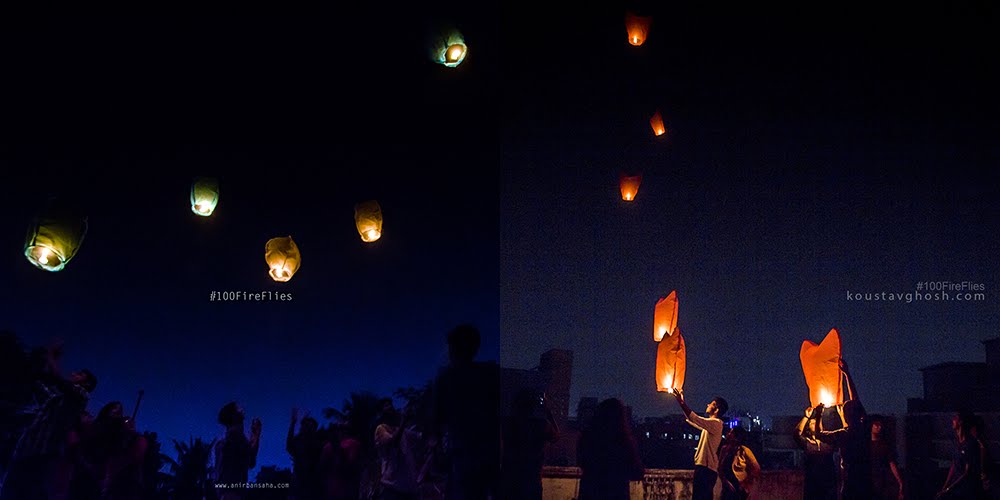 A lot in my close friend circle came. Asmita couldn’t, she had work. Rimbik had to stay back to take care of his mother. Surya, Arya are in Vellore and Pune. Arjyak, who missed the Dhunuchi made sure he did not miss this one. Debayan, Harshit, Surrbhi, Koustav came. Esha cancelled her meetings to see how a sky lantern is lighted. Rrivu, Madhura, Sayan Biswas, Sayan Bhattacharya, Souranil, Upasya cancelled their work ( and tuition classes) and jumped in. Madhura tried her best to light one! Sayan and Esha found it so interesting that they called more of their friends to their homes and tried to light more of them during Kali Puja and Diwali. Rrivu and Debayan joined Sayan and his friends.

You know what the time with close friends is like. You know what these college kids become right after they leave school. If you know me personally and know my informal self, you know how not-very-diplomatic I am and how I eat most of the words and murmur half sentences which could be interpreted in a few more ways than just one. The second ones are always dirty. But then again, they’re close. 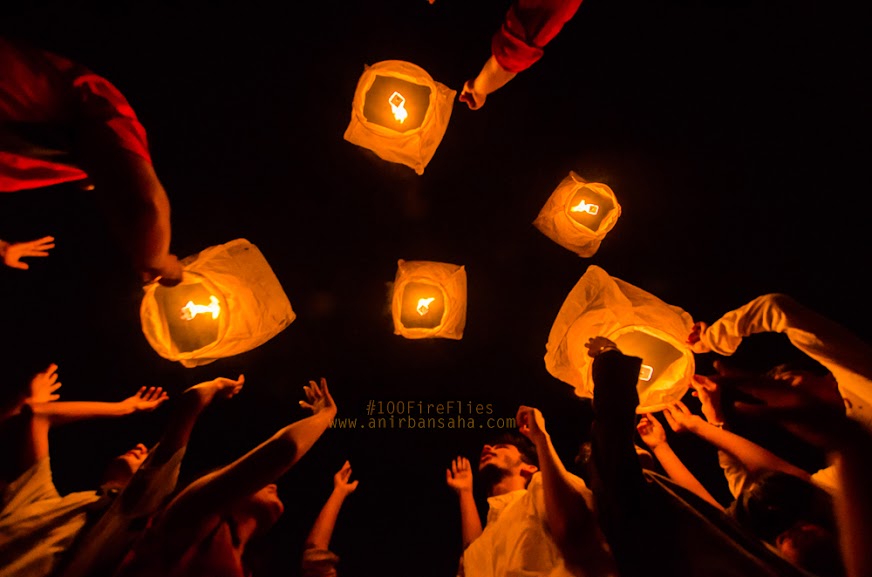 This Diwali we spent some time with the children of the Missionaries of Charity, bursting crackers and amusing them. Asmita is a volunteer there and this was the third year she planned it. This was the second year I was a part of this. Rajatabha joined in. The kids were smiling and laughing. There was this moment when all the kids laughed with amazement. I froze for a moment. That moment is priceless. 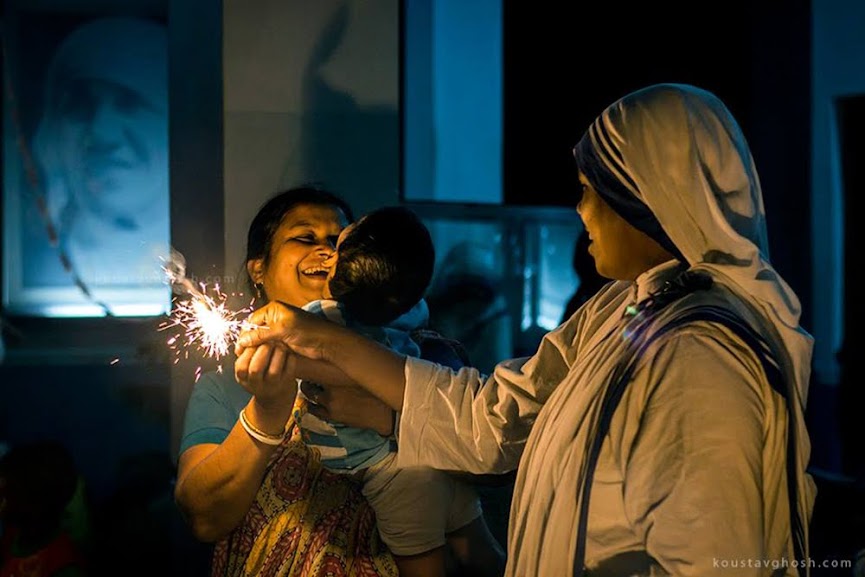 Asmita is slightly different. This young girl whom I met in Loreto College during a photography talk, is an able leader. She works with Kolkata Bloggers, MAD, The Telegraph T2 and also manages time for other activities like volunteering for The Missionaries of Charity. Like her, each one in my close friend circle are leading lives slightly differently. While the elder Sayan’s film is selected in a film festival, Rimbik’s film got accepted in the Kolkata International Film Festival. The younger Sayan is a distinguished MUNer, Rrivu apart from being the regular JU student works with the Goethe Institute as a German teacher. Arjyak is the co-owner of Kolkata Bloggers. Harshit, Surrbhi, Debayan are invaluable team members in their offices. Koustav’s candid shots have always captured imaginations. Esha owns BEE Books and is taking this publishing house to newer heights using her creativity and sheer determination.

If I have to draw references from Tagore, they aren’t the brightest of stars in their fields, but nothing could stop their indomitable spirits. Lighting their surroundings, making people smile, their own way, in their own little capacities. Listening to their inner strength. Embracing their wins, learning from their own failures. Fireflies. Yes. Each one of us. A hundred in our close friend circle. #100FireFlies.